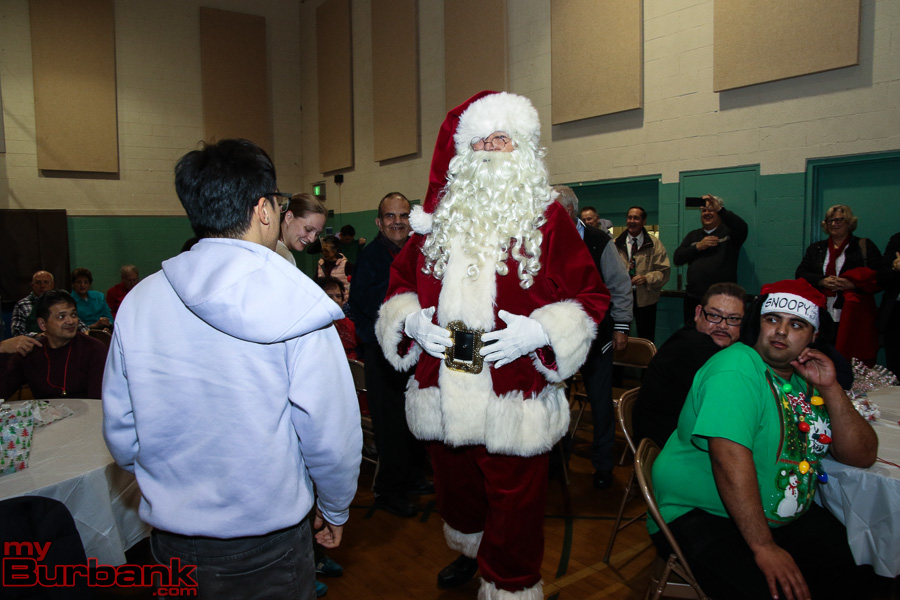 In the spirit of the season, the Burbank Sunrise and Burbank Noon Rotary service clubs joined forces for a special week of holiday giving.

Giving joy.  Last Tuesday, December 4, the two clubs put on their annual holiday dinner for those cared for by BCR, together with their families.   The Emmanuel Church’s gymnasium echoed with happy chatter as the over 100 people enjoyed Handi Mart’s lasagna and eagerly awaited the arrival of Santa Claus.

When Santa sat by the festive tree and called up each of the BCR clients by name to give them their present, their faces soon became bright with delight.  Somehow, Santa had known exactly what each person had wished for!  The evening concluded with Santa’s elf singing holiday favorites as her joyful BCR fans smiled, sang and danced.

Event organizer and Burbank Sunrise member Mary Gilbert let out her breath and sat down.  It all came together once more.

Giving recognition.  The following evening on Wednesday, December 5, Burbank Noon held their holiday party at the Castaway’s Valley View Room, as rain and mist blanketed the stars above and the streetlights below.  But the Rotarians’ spirits weren’t dampened, and the drinks were dry.  The Boy’s and Girl’s Club had just finished a charming holiday revue of singing and dancing, including green elves singing “The Twelve Days of Christmas.”   And there was much to celebrate.

President Albert Hernandez inducted Stephanie Bennett as the newest member of Burbank noon.  Burbank Noon member Barry Gussow had made Stephanie aware of Rotary during a recent poker tournament benefitting Kids Community Dental.  Bennett, a Burbank resident who is no stranger to volunteering, decided to visit Burbank Noon.  She liked what she saw.  “I look forward to new opportunities for serving in the community,” she said.

Rotary Lifetime Achievement Honoree Peter McGrath occupies the opposite end of membership longevity, having been a member of Burbank Noon for 52 years.  (For perspective, when he joined in 1966, we hadn’t landed on the moon yet, and the Beatles were still together.)  “As a young man, older guys were giving me all kinds of business advice,” he recalled.  Now he’s the gray-haired sage. In between, he grew a business, raised a family and served in just about every Rotary capacity, including club president.  McGrath’s long and distinguished Rotary career made him a natural candidate for a roasting, and his own wry remarks made sure that the flames left nothing unsinged.

Women In Rotary History Honoree Janice Lowers was not expecting to be part of the program that evening.  But her contingent of Burbank Sunrisers knew she was in for a pleasant surprise.  They also knew she exemplified the enormous impact of women in Rotary since 1989 when the international organization had the good sense to admit women members.  Her Burbank Police Department career involved her in many community projects and made her aware of many unmet needs.  She carried that awareness into her many years with Rotary, where she has been one of the club’s dynamos.  Recalling the late President George H. W. Bush’s “thousand points of light” speech she said, “If I could just be one of those points of light. I’m so proud to be a Rotarian.”

Giving financial support.  Also during the Wednesday evening party, Foundation Board Chair Gussow awarded $10,000 to the Providence Saint Joseph Medical Center Foundation, in support of a state-of-the-art Emergency Room and Urgent Care Facility.  Gussow reminded that Burbank Noon club that they had committed to $5,000 annually for five years ($25,000 total) for this purpose. “But thanks to our president, Albert Hernandez, who also has a passion for this project, our first installment is $10,000, shortening the giving time by a year.”  This was in no small part due to very successful fundraising during the previous 2017-18 Rotary year.

On hand to accept the contribution were Dr. Celina Barba-Simic, a board-certified physician in

emergency medicine and a member of PSJ’s staff since 2004; Renee Bianco, Vice-President of Foundations, LA Region and Executive Director of PSJ Foundation; and Michael Mayne, Senior Philanthropic Advisor at PSJ Foundation.  They were joined by Burbank noon member Nat Rubinfeld, co-chair of the Burbank Committee and member of the board of directors of the PSJ Foundation.

Giving time.  Add in getting ready to distribute holiday baskets, and the bell ringing for the Salvation Army and you have, along with many other Burbank service clubs, a very special time of giving.