Giving back was the theme of the evening at the Burbank Salvation Army’s annual Thanksgiving Dinner held at its Downtown Burbank headquarters on Wednesday night.

Volunteers of all ages were scurrying about, making sure everyone was getting a beautiful plate of turkey, mashed potatoes and all the fixings. Oh, and don’t forget a plump slice of pumpkin pie. 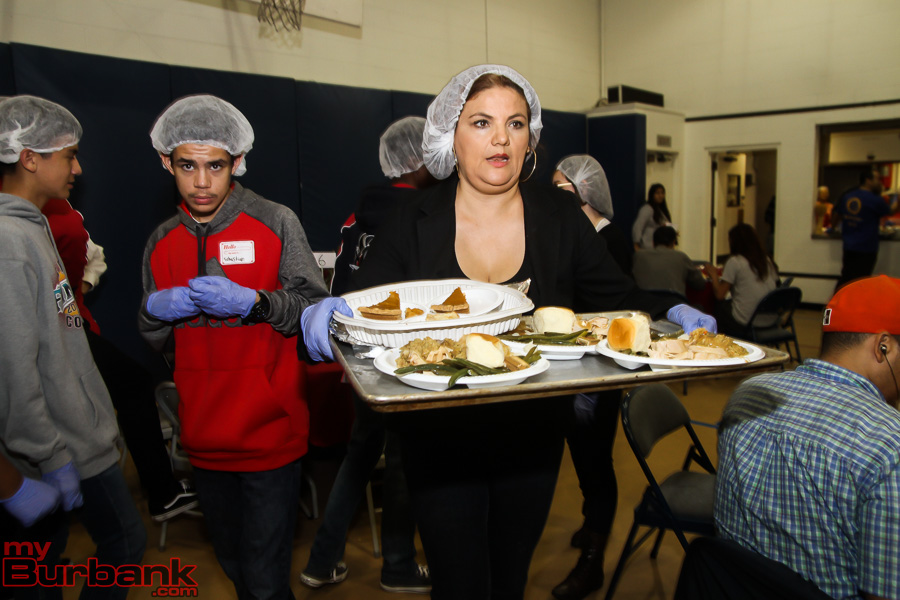 Army officials were prepared to serve 400 people, said Lt. Jeremy Baker, who is in charge of the local corps office with his wife, Lt. Brittany Baker.

“The people who attend are everyone from everyday business people to homeless people and families that are just having a hard time this time of year,” he said. “So it’s a large variety of people who are coming together enjoying Thanksgiving.”

Volunteers who were helping to serve the food included members of the Burbank Sunrise and Noon Rotary clubs, students from Burroughs, Bellarmine-Jefferson and Notre Dame high schools and members of the Salvation Army church and interns learning to become officers. Even Mayor Jess Talamantes had donned a red apron to help serve up meals. 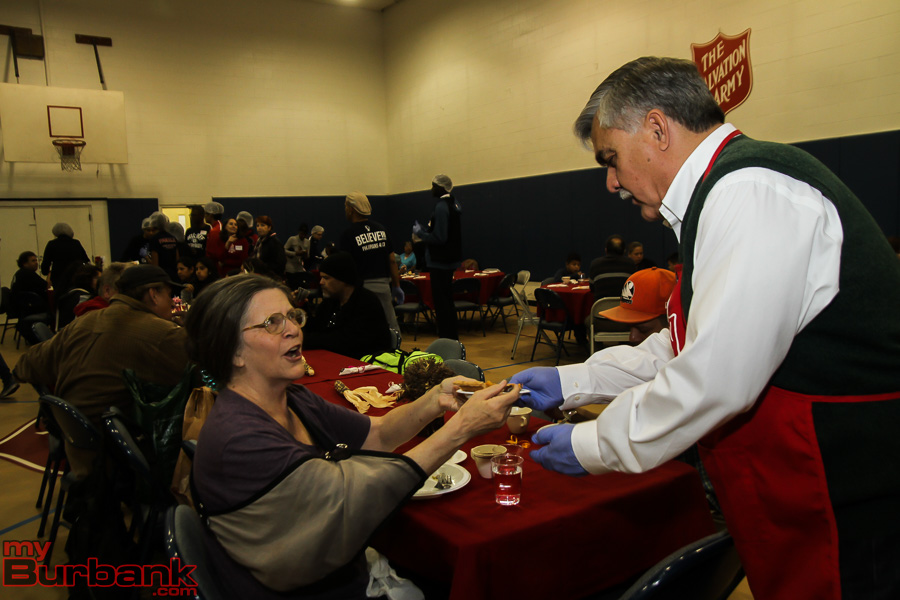 “It’s just about giving back to the community,” Talamantes said.

The Holiday Inn Burbank-Media Center partnered with the Salvation Army to cook everything but the turkey, which was cooked and carved by Handy Market.

In addition to the turkey and gravy were mashed potatoes, stuffing and green beans and beverages like water, juice and coffee. The pumpkin pie was purchased from Costco through cash donations from the community.

It was the first time Gabrielle Jackson, 14, a ninth-grader from Notre Dame High School in Sherman Oaks, was volunteering time to the Thanksgiving dinner.

“I think it’s really a great thing to do,” she said. “I think the people I was serving were retired veterans. It’s such a nice thing for them to get a home-cooked dinner.” 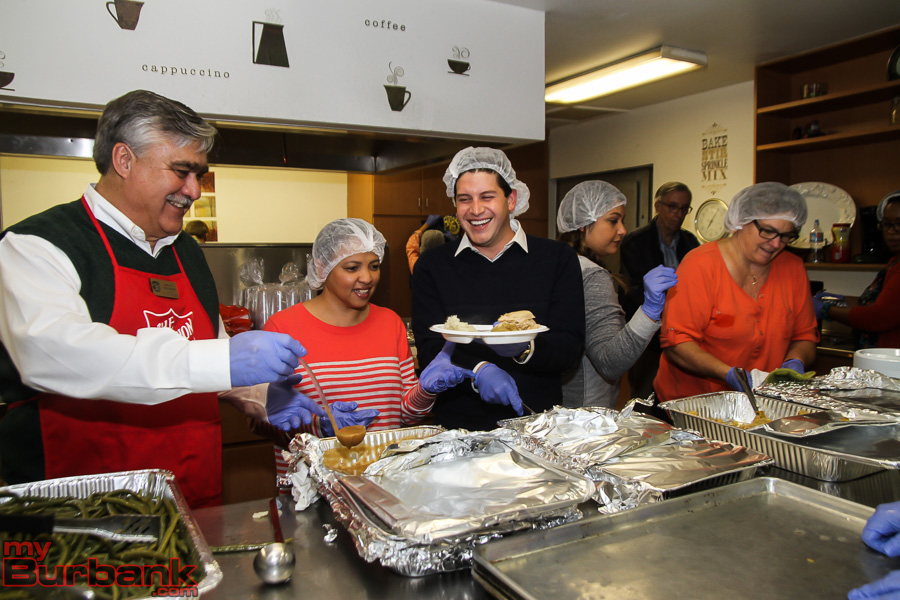 Don Stump of Burbank was having dinner for the second year in a row at the Salvation Army.

Bell-Jeff basketball team players Ray Witt Jr., 15, a freshman, and Jon Haladjian, 17, a senior, were volunteering for the first time at the Thanksgiving dinner.

“It’s actually pretty fun serving people, talking to them and getting to know them,” Ray said. “They said thank you every time I gave them something.”

“It’s fun to meet these people, get to know them and know where they come from and realize they are normal people like us and we’re here to help them have a great Thanksgiving,” Jon said. “We aren’t here to get service hours. It’s always nice to give back and not just receive.” 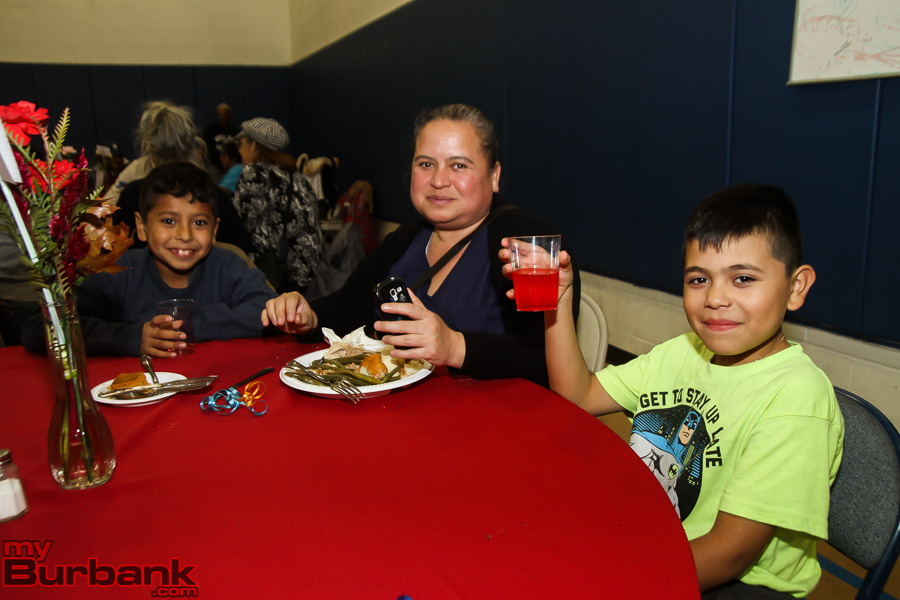 “I just wanted to do this because I wanted to participate in something fun and different,” she said.

She was cutting the pumpkin pie into slices.

“This has made my holiday so much better because I’m with my friends from Burroughs,” she said.

Selina Reyes was with her family of six people including her 7-month-old daughter Lucy.

“We come every year,” she said. “We used to volunteer when we came to church here when we were teenagers about 15 years ago. It’s very relaxing. I can bring the kids and I don’t have to worry about them making a mess or a ruckus. Tomorrow at the family dinner I’ll have to be watching out for them at my mother-law’s house.” 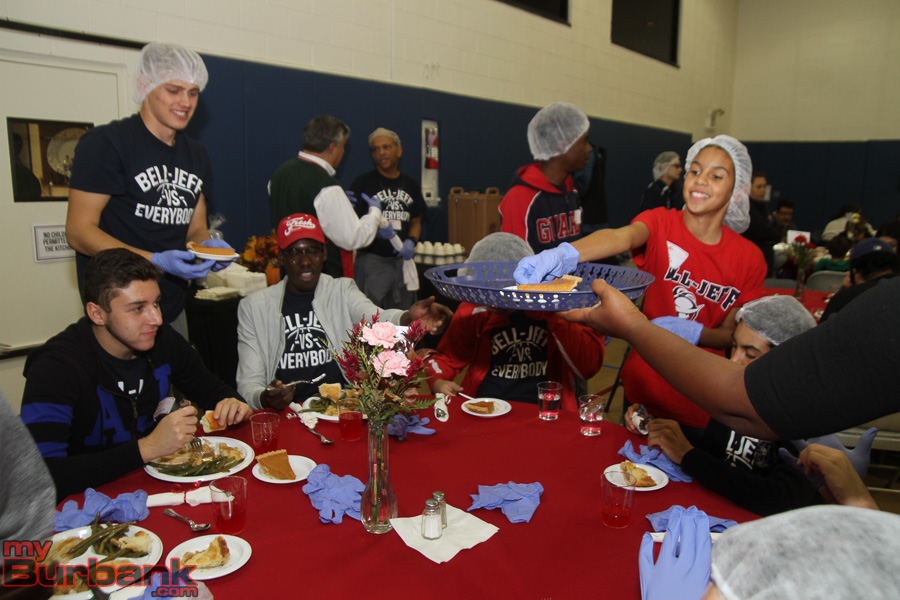 Diana Sandoval came last year to the Salvation Army dinner and decided to come back because it was such a nice and fun atmosphere and because she lives alone.

“So it’s either this or Taco Bell,” she said. “I did a Del Taco a couple Christmases ago. It was not fun.”

Sandoval was sitting with people she had met before but really didn’t know.

“That’s the kind of fun thing about being here, you sit and talk and meet new people and you have great young students serving you,” she said.

Sandoval hopes that her economic challenges will improve so she can come back as a volunteer next year.

Sitting at Sandoval’s table was Margaret, who wouldn’t give her last name. She said she is homeless and sleeping in her car. 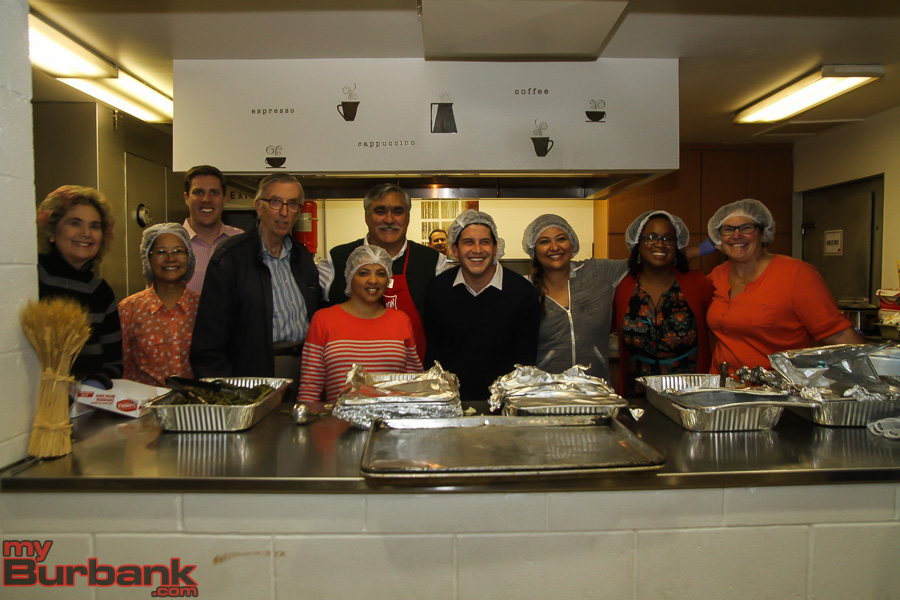 “The food is excellent and the people are so gracious,” she said. “They come and they seat you and they wait on you. It’s a lovely experience.”

Margaret lost her job three years ago and she hasn’t been able to get work since then, she said.

“But things are looking up right now,” she said. “I applied for my Social Security. Somebody told me it was going to be an ordeal, but it wasn’t and I hope to have a place soon and I’m really looking forward to a wonderful 2017.”