The Burbank High football team didn’t jump out of the gate as fast as one might have expected. But once the Bulldogs got rolling they kept going, winning 61-7 in a Pacific League contest over Glendale on Thursday night at Memorial Field.

“I challenged them to get ready to work this week. We need to get better,” Burbank coach Richard Broussard said after losing 21-20 to Muir last week. “We’re not the greatest team right now. We’re not where we think we are. We need to improve. But I’m happy that we came and did the things we needed to do.”

Burbank (3-3 overall, 2-1 in league) got on the board at the 7:23 mark of the first quarter as sophomore tailback Darnell Williams scored on a two-yard run. 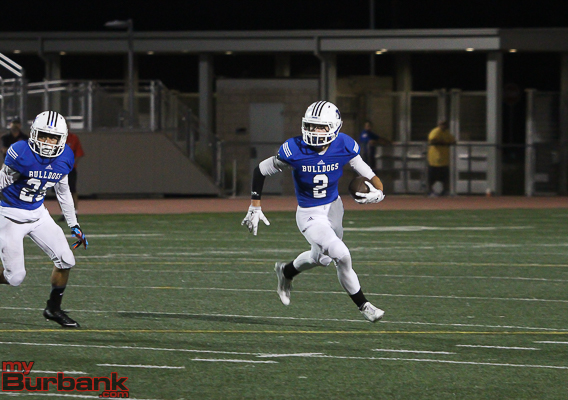 Forest Fajardo helped Burbank rout Glendale, 61-7, with a 75-yard kick return for a score. (Photo by © Ross A. Benson)

Glendale (1-5 overall, 0-3 in league) was tough defensively in the first quarter.

The Bulldogs eventually scored for a second time as senior running back/wide receiver  Aki Arlington scored on a 13-yard run with 1:35 left in the first quarter to make it 14-0.

Burbank got a big break on the ensuing kickoff as senior defensive back Noah Powell forced a Glendale fumble and sophomore linebacker Drew Pendleton not only recovered, but ran back for a touchdown.

Glendale pulled a surprise on Burbank on the first play of the second quarter as junior running back Carlos Ramos had a 78-run that was followed up by a three-yard touchdown from senior fullback Abraham Martinez.

But Burbank was not fazed. 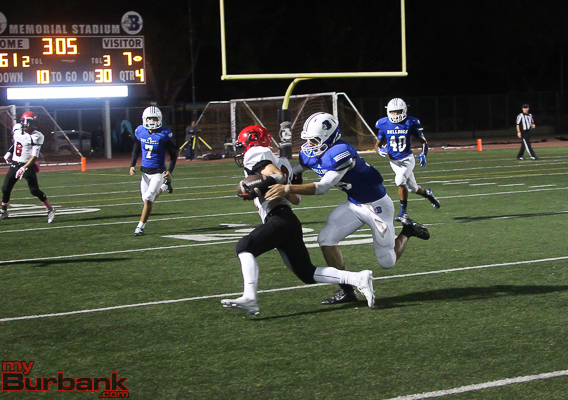 Burbank’s defense was too much for the Nitros in a Pacific League game. (Photo by © Ross A. Benson)

Bulldogs’ junior quarterback Guy Gibbs later scored on a two-yard run with 6:40 left in the first half.

Less than a minute later, Arlington intercepted a Glendale pass and returned it 35 yards for a touchdown to make it 41-7.

Gibbs and Fajardo hooked up on a five-yard touchdown with 2:38 left in the half.

After another Glendale turnover, Williams scored on a two-yard run with 1:37 left before the intermission.

“It was good to bounce back. The offense has been struggling a bit. We put some points up and scored and executed our schemes,” Broussard said. “We just wanted to come out and execute a lot better and we did that.”

The second half was played with a running clock.

Arlington capped the night by scoring on a three-yard run with 10:14 left in the contest.

The Bulldogs visit Hoover on Oct. 15 for a Pacific League game at Moyse Field in Glendale.