After Thursday night’s 3-0 victory against cross-town rival Burroughs, the Burbank softball team took a major step in its quest to win a league championship for the first time since 1987. On a beautiful evening at McCambridge Park, sophomore Caitlyn Brooks dazzled the overflow crowd while bedazzling the Indians with a complete game shutout. 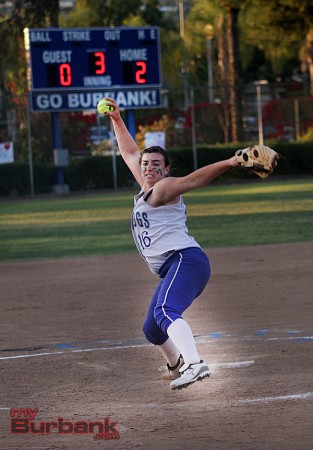 It was Burbank’s first win against Burroughs since 2008.

As the game moved into the latter part of the evening, Brooks got stronger and more invincible. She struck out eight of the last 10 Burroughs hitters en route to a 14 strike-out performance allowing only one walk on three hits. It’s become pretty clear there is someone special in the circle for Burbank High.

“Caitlyn is a coaches’ dream. She’s competitive and she wants to show she is the best out there. In my opinion, I think she is actually the best pitcher in the country,” Burbank coach Nicole Drabecki said proudly. “I’m so grateful to have her in my program. She has an excellent work ethic. She puts in the time and that is how you become great.”

Brooks, who has committed to the University of Notre Dame, established herself again as one of the premier players in the surrounding area with Thursday night’s masterpiece to all in attendance.

“The beginning of the game I’m usually a little weaker because I’m feeling out where the umpire is. As the game goes on I get stronger and more confident,” Brooks said. “My defense is awesome too. It was really tight today so that helped. I know they have my back so I can just pitch it. I don’t have to worry about them hitting the ball as much.”

Burroughs (13-6, 5-2) had several opportunities early on to make a dent into Burbank and Brooks’ psyche. Michelle Santiago led off the game with a triple only to be stranded there after a strikeout and double play. Brooks caught a line drive off the bat of Kaitlin Okimoto and doubled Santiago off third base. 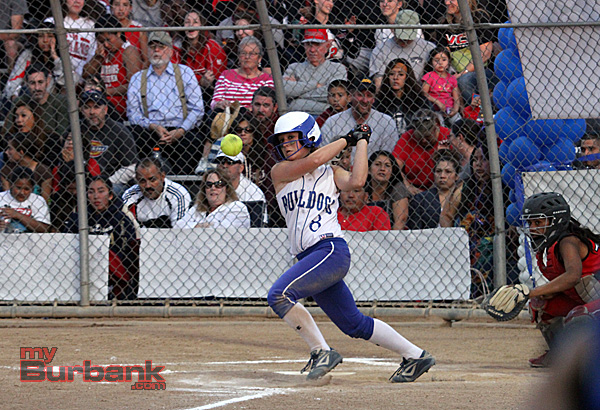 It was a golden opportunity that got squandered away by the Indians. Runs are at a premium against Brooks as evident by her 0.36 earned run average.

“Our kids didn’t shake their knees in that inning,” said Drabecki, who is in her sixth season as coach. “They were prepared, they were confident and they had the faith that they were going to get out of that inning. And we did. That’s awesome.”

Burbank (14-1, 7-0) broke through in the second inning against Brice Edrington, the Indians lone senior. Edrington, in her first week back pitching in more than a month due to an injury suffered in a horrific car accident, threw valiantly but ran into trouble in a lengthy second inning.

Lily Winn led off with a walk and stolen base. A sacrifice fly by Laina Do advanced Winn to third. Julia Duarte put down a well-executed bunt between first and second base that skirted through for a single and a 1-0 lead. Two batters later Katie Hooper tripled down the right field line scoring Duarte and giving Brooks all the runs she would need. 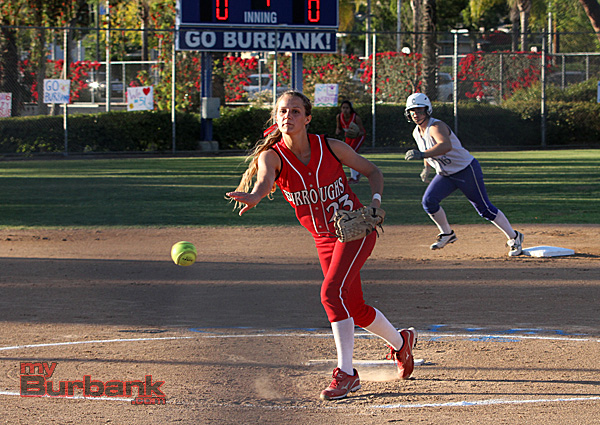 “This girl in the middle of March was pulled out with the jaws of life. After not pitching for a month and a half, she comes back just this week and pitches under the lights against Burbank High and matches Caitlyn Brooks pitch for pitch,” Burroughs coach Doug Nicol said of Edrington. “I thought she did really well. I’m so proud of Bryce and the rest of our team.”

Hooper would score her second run of the game in the fourth inning on an RBI single by Jazmin Orozco.

“It feels amazing. It’s my first win as a Burbank High softball player against them,” Hooper said. “We are not going to stop working hard. We are going to do it. It doesn’t matter if we are two games ahead of them or one game or a half a game, we are going to work hard to get to the top.” 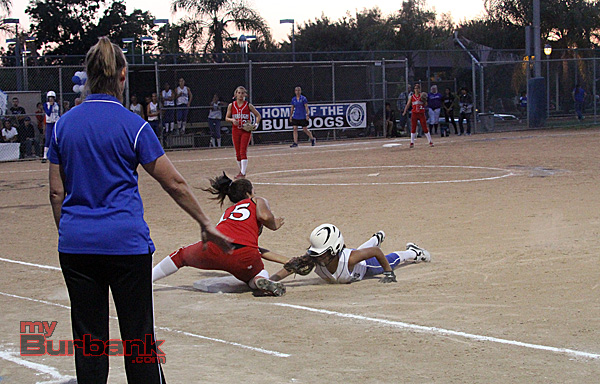 A Burbank runner slides safely under the tag of Burroughs’ Aimee Rodriguez (Photo by Ross A. Benson)

Brooks punctuated the victory by striking out the side in the top of the seventh. Burbank now has a two game lead on Burroughs for first place.

“I just told them I’m proud of them. I got a little teary-eyed. I told them that it’s taken five years to get this victory,” Drabecki said. “We could win a league championship and I also think we could win a CIF championship if they keep working hard, believing in themselves and staying confident.”

Nicol found consolation in the loss with a positive attitude after the game.

“We battled all game. There could have been a million times where we could have quit. And we didn’t. I’m so proud of our kids. We played Burroughs softball,” Nicol said. “For as young as we are, to battle that team and do what we did I’m pumped about our future and I’m pumped about what the rest of the year has for these girls. I think they grew up tonight.”