After it was over, Burbank assistant coach Craig Sherwood called it “one of those games that had a feeling of destiny to it.”

Arcadia baseball celebrated its seniors prior to first pitch on Wednesday, May 2 versus Burbank. Most of them had never been a part of loss in league as the Apaches were looking to add to a 41 consecutive games win streak versus Pacific League foes. They didn’t really know what a loss in league felt like. 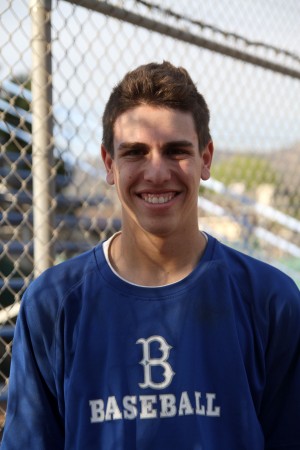 Burbank upended the Apaches, 3-0, handing them their first league loss of the season and the first since May 5, 2009 which was also at the hands of the Bulldogs, 5-3.

The Bulldogs ace Daniel Starkand continued a pretty impressive streak of his own, extended his innings pitched in league without surrendering an earned run to 35. He has allowed only three runs overall, all unearned, and he has five complete games.

As is usually the case with Starkand, he hit spots and wasted very few pitches — throwing just 85 pitches in seven innings while walking none and striking out three.

“He’s not overpowering, he is just makes his pitches with percision and is really dialed in right now,” head coach Bob Hart said. “From what I can tell it was more of the same today.”

Hart had to trust the power of the “Iscore App” to be sure after being ejected in the top of the first inning after arguing a call at first where leadoff man Ian McKinnon was clearly safe but was called out. After a walk and a hit, the top of the inning ended with no runs across for Burbank and Hart felt they should have been up 1-0.

“It was pretty obvious, but I should not have gotten run with so much baseball left to play,” said Hart, who also denied the ejection was any ploy to fire-up his guys.

“That is not my style, but I have to admit the guys really did play focused ball the whole way so it may have had some sort of psychological effect that was positive.”

It’s pretty easy when the guy on the mound is as dialed in as Starkand who scattered seven hits and who never had a runner reach third base. He was aided by a nice play in center field by Ricky Perez, solid plays from shortstop Dylan Mersola and steady play from catcher Paul Frias.

“No one runs on Paul, and that is such a weapon to have,” Sherwood said. “I know his (batting) average is down from where it was a year ago, but he is the man behind the plate and he helps our team tremendously.”

Mersola has put behind him some defensive struggles from the season’s first two weeks and has been steady up the middle.

“Because no one works harder,” Sherwood said.

Burbank has also put a slow start behind it. After an 0-3 start Burbank is now 11-8 overall and 8-3 in league play. The Bulldogs sit firmly in third place.

The Bulldogs got one in the second, one in the third and an insurance run in the seventh at Arcadia on Wednesday. Harrison Hernandez had two hits while Mersola, Hernandez and CC Okimoto had RBIs.

Burbank travels to Muir for what should be an easy game against the Mustangs before finishing the regular season with Hoover and Burroughs next week.

Starkand lowered his league leading ERA to 0.41 and improved to 5-2 on the season.