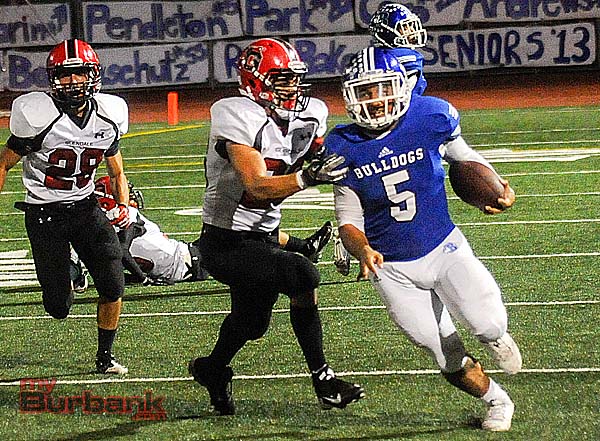 After suffering two consecutive tough losses at the hands of Crescenta Valley and Muir, the Burbank High football team regrouped last week at practice and decided to make amends one game at a time. They had no choice given the situation they were in.

The Bulldogs rebounded in a big way dominating Glendale from the very start, 56-14, Thursday night at Memorial Field. The dose of Nitro medicine washed away the bitter taste in their mouths from the past two weeks. 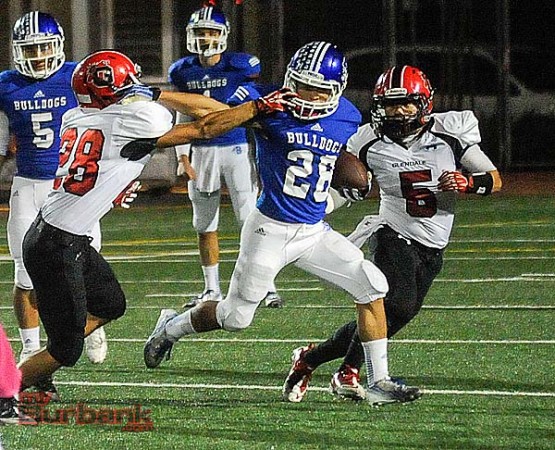 “It was rough in the beginning,” quarterback Ryan Meredith said. “Everyone was struggling with the back-to-back losses. But we fought through it in a better way.”

Meredith had his way completing eight of nine passes for 196 yards and four touchdowns. He did not play in the fourth quarter which had a running clock because of the point differential.

“I struggled last game. I had to get back in rhythm,” said Meredith. “I have confidence now so hopefully it carries into next week.”

Burbank (6-2, 3-2) must defeat Hoover next week on Halloween night to put itself in position to battle Burroughs for a chance at an automatic playoff bid from the Pacific League.

The Bulldogs wasted little time in establishing themselves.

On the very first play of scrimmage, James Williams took a shovel pass from Meredith and sprinted to the house for a 50-yard touchdown.

After recovering a Glendale fumble on the visitors’ 42-yard line, Joseph Pendleton punched in a 12-yard touchdown run and a 14-0 lead. 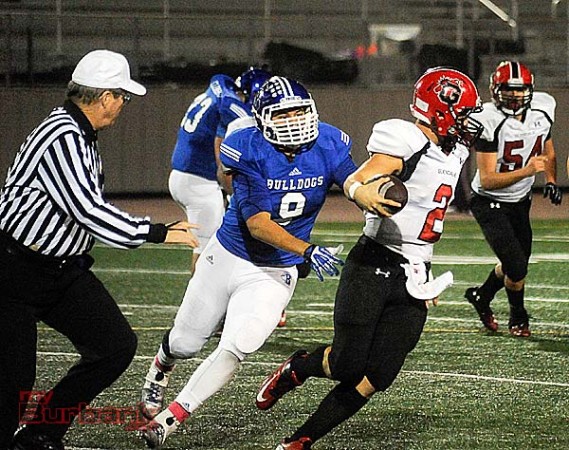 Burbank’s defense was solid all night (Photo by Craig Sherwood)

The flood gates officially opened on the ensuing kick-off when the Nitros fumbled the kick. Meredith took the next snap and fired an 18-yard touchdown pass to Brown.

The Bulldogs converted their third straight two-point conversion and in the blink of an eye the lead swelled to 30-0 with 2:11 remaining in the first quarter.

The 30-point explosion came off three Glendale turnovers and only eight plays on offense for BHS.

More of the same continued with Burbank striking on the first play of the second quarter. Williams, who rushed for 124 yards on nine carries, took off on a 49-yard touchdown jaunt, one of his four touchdowns in the game (three rushing and one receiving). 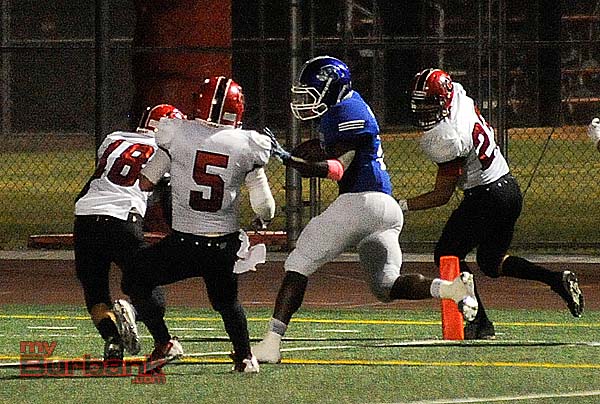 With just nine offensive plays completed in their back pocket, the Bulldogs already had a 36-0 advantage.

Glendale (2-6, 0-5) was able to sandwich in a touchdown in between a 20-yard touchdown pass from Meredith to Santoro (two catches for 55 yards) and a 12-yard touchdown run by Williams.

The onslaught was only halted by time running out in the first half with the Bulldogs leading, 49-7.

The first half stats for Burbank were eye-popping. The Bulldogs accounted for 359 yards on 19 plays for an average of 18.9 yards per play. The average touchdown went for 28 yards.

The teams traded touchdowns in the second half with Williams scoring his fourth and final touchdown on a five-yard sweep.

Pendleton finished with 67 yards on seven carries while Tony Toledo ran for 56 yards on five carries.