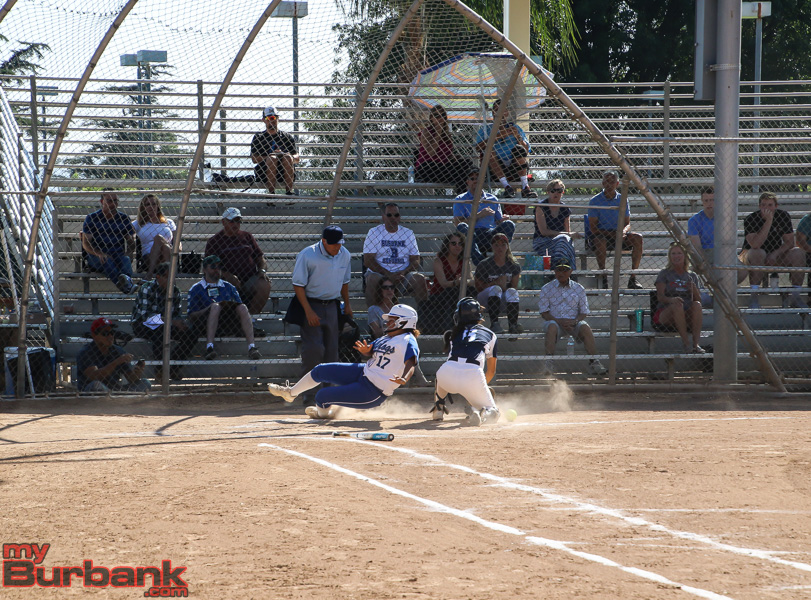 For all intents and purposes, two innings doomed the Burbank High softball team when it faced Crescente Valley on Thursday afternoon at McCambridge Park.

Getting the early jump, the Falcons scored three runs in the first and second innings and held on for an 8-5 Pacific League triumph.

“After that we settled down,” Burbank coach Mike Delaney said of the first two frames. “They put pressure on you and we didn’t handle that pressure very well.”

Eight batters trotted to the plate in the opening stanza against sophomore Alyssa Porras, who went one and two-third innings initially, two and two-third overall, walking five with six hits allowed.

Five of the first six batters were safe including a bases-loaded walk to sophomore Viviana Bocanegra that forced in senior Jessica Yzaguirre (four hits), who led off with an infield single.

Crescenta Valley’s cushion was extended to 6-0 in the second inning when nine hitters marched to the dish.

De Leon’s two-out booming triple to left center scored Yzaguirre, who was safe on an infield single and Hernandez, who walked.

It became 6-0 on a bloop single to right center by Bocanegra off junior Allie Benson, who went four and one-third innings, walking six, with three hit batters, six hits surrendered and one strikeout, that brought in De Leon.

“Our pitchers were not hitting their spots,” Delaney said of his duo that combined to allow 11 walks and 12 hits with three hit batters.

Burbank (11-13 and 7-5 in league) cut the lead to 6-1 in the bottom of the second when junior Bene Snyder (two hits) had an infield single off junior Emily Mulcahey (seven innings while scattering 12 hits, walking two, with four strikeouts and one hit batter) that drove in junior Macie Jensen, who walked.

The Bulldogs chipped away and made it a three-run deficit with a two-run third inning as sophomore Sarah Garelick (two hits) rifled a single to center field that knocked in junior Melissa Daniel, who led off with a walk and junior Anysia Gonzalez, who reached base on an infield single.

“We’re a confident offensive team,” Delaney noted. “We don’t fear too many pitchers. But we had three strikeouts in critical situations.”

Burbank trimmed Crescenta Valley’s lead to 6-4 with a tally in the fourth inning when Daniel’s double to left field plated sophomore Amaya Broyls, who singled to center.

A two-run frame in the sixth by the Falcons (18-7-1 and 10-2 in league) pushed the lead to 8-4 as Eldred led off with a single to right center and later came around on an error while sophomore Peyton Hause’s run-scoring hit to center scored sophomore Kristy Taix, who laid down a sacrifice bunt and went to second base on an error.

The Bulldogs made it a three-run deficit with a run in the seventh when junior Erin Lashkari clubbed a long leadoff triple to left center and crossed the plate on Jensen’s single to right field.