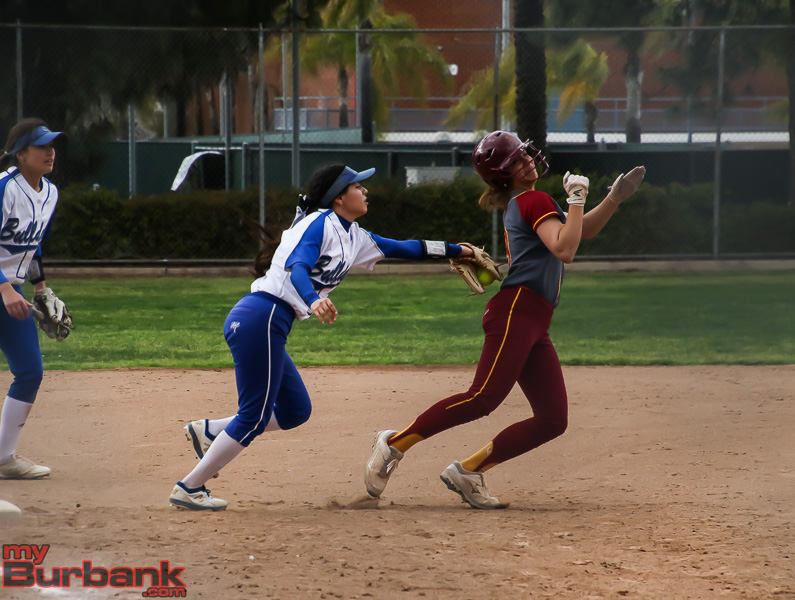 Playing shorthanded is a tough way to operate, but the Burbank High softball team had to against Arcadia on Monday afternoon.

Even so, the Bulldogs found enough intestinal fortitude to rally from four runs down in the sixth inning, but then gave up two runs in the seventh inning and lost 7-5 in a Pacific League contest at McCambridge Park.

The Bulldogs (2-4 and 1-1 in league) were without the services of seniors Nikki Davis and Emily Monterrey along with junior Savannah Benson.

It seemed late in the game that Porras may have been tired, but wasn’t taken out by Burbank coach Mike Delaney.

“We thought about it a couple of times. But where they were in the lineup versus what she was doing with those kids, it didn’t ever come up to it at that point,” Delaney said. “She battled. She missed a few spots, but we didn’t help her with our flat-footedness today. We were flat-footed with our defense.”

The Bulldogs cut Arcadia’s lead to 5-4 with a three-run fifth inning as seven batters trotted to the plate.

With none out, senior Izzy Sanchez lined a sharp base hit to center field as senior Sarah Garelick, who walked and sophomore Erika Montoya, who collected a single to left field, both scored.

Senior Alex Davis was safe on a fielder’s choice that scored a run as pinch runner, junior Tiffany Estrada, who came in for Porras, drew a walk.

“Our outfield didn’t help us and our hitting didn’t help us,” Delaney pointed out. “We did not hit in key situations. That’s what we’ve been kind of stressing the last couple of games. We’re all trying to hit the ball over the fence. You hit the ball in the air here, it’s just an out.”

The Apaches (9-1-1 and 2-0 in league) bolted ahead 7-5 in the seventh when senior Deja Westbrook drilled a single to left with one out. Westbrook moved to second base on a grounder by senior Helena Simpson.

A clanging double to left center by freshman Morgan Howey (two hits) scored Westbrook and Howey crossed the plate when senior Karly Gills roped a base hit to center field.

Burbank evened it at 5-5 with a run in the sixth inning as sophomore Lily Stell clubbed a long one-out triple to right center, and Garelick’s grounder drove in the run.

The Apaches opened up a 1-0 lead in the first inning when Simpson’s single up the middle scored sophomore Averi Wong, who singled to left field with one out.

The Bulldogs tied it at 1-1 in the first inning when Davis led off with a booming triple to right center and crossed the plate on a sacrifice bunt from senior Amaya Broyls.

“I think our hitting is what drives us,” Broyls said. “When we’re hitting line drives in the gap, and when we’re getting good hits off her, it gives us a lot momentum and that’s what helps us.”

Broyls then added: It’s been hard with all the rain and we’ve been trying to practice and some girls have been hurt,” she said. “Being a catcher. Being a senior. Being a captain. There’s a lot of pressure and I feel like I need to lead the team along with the other captains. We have the younger players. We all need to step up and do our job.”

A two-run third inning by Arcadia made it 3-1 as Westbrook lined an inside-the-park homer to center field that plated Wong, who was safe on a force out.