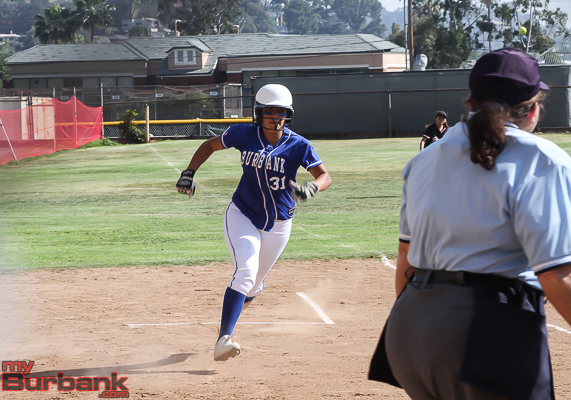 It isn’t every day that a hitter at the bottom of the lineup comes through with the game-winning hit.

But it was the ninth and last hitter in Burbank High’s lineup that came up big Thursday as the Bulldogs pulled out a 3-1 win over visiting La Mirada in the first round of the CIF Southern Section Division III softball playoffs.

Left-handed hitting Allyson Capili hit a bases loaded two-out double to left field in the bottom of the sixth inning to score Julia Duarte and Jazmin Orozco and give the Bulldogs the upper hand.

“I was planning on fouling it off until I found the right pitch to hit,” said Capili.

No. 3 seed Burbank (21-4) moves on to the second round Tuesday where it will travel to La Puente to face Bishop Amat High School.

Burbank pitcher Caitlyn Brooks, who finished with nine strikeouts, had two in the seventh and final inning.

The win was certainly a relief for Bulldogs coach Mike Delaney, as the two teams appeared to be headed to extra innings.

“She shortened up on her stroke. She got up on the plate like we asked her to,” Delaney said of Capili. “She took the pitch outside with her. I figured if she didn’t hit that pitch the next one was going to be inside.”

Burbank got on the board in the first inning. Leadoff hitter Lilly Winn drew a walk and one out later Brooks also reached base on a walk. Duarte singled home Winn.

La Mirada (14-16) was much tougher than its record might suggest.

The Matadors had five hits against the University of Notre Dame-bound Brooks.

They tied the score in the third inning as Nikki Barrow had a two-out bloop double and scored on a single by Angel Urbina.

“We’re a little nervous. A lot of us are seniors and it could be our last game,” she said.

Offensively Burbank did not get a runner past second base in the second through fifth innings.

“They were a good team. That kid threw hard and she had a lot of movement,” Delaney said. “We just had to find our pitches. Like I told the girls we left too many girls on base when we had the opportunity early in the game to put them away. It was good that Allyson came through in that bases loaded situation.”

“It’s really tough when you don’t know your opponent as well,” he said. “You’re going off MaxPreps and what people know. It’s really difficult in some instances where you face a team like that. I don’t think we faced a team with that many (left-handed hitters). We knew they had some lefties and what they were going to do. But it’s hard to replicate that in practice.”