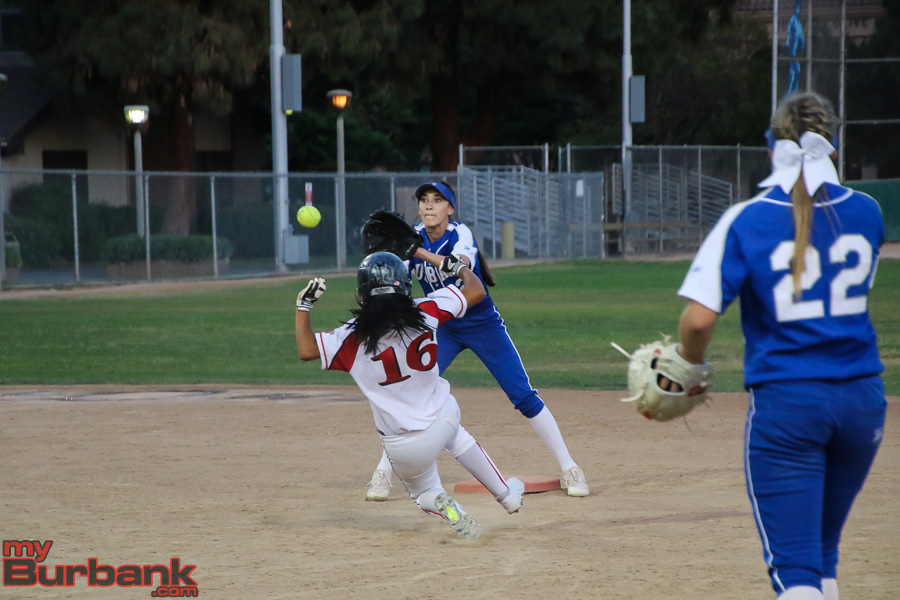 From the first inning, it was evident the Burbank High softball team was going to be extremely patient at the plate.

In many at-bats, including a bases-clearing double by junior Melissa Daniel in the sixth inning, the Bulldogs waited for hittable offerings from junior Burroughs ace Presley Miraglia.

The result was Burbank’s 5-2 win in a Pacific League game at a jammed-packed Olive Park on Wednesday night, which snapped a three-game losing streak to its city rival.

“When we play like we’re capable of, like we did tonight, we’re a good team,” Burbank coach Mike Delaney said. “The reason we won was because of all 15 girls.”

Burbank’s lead was 2-1 heading into the sixth inning, but the advantage swelled to four runs on Daniel’s deep blast that saw her attempt to stretch the hit into a triple, but was thrown out at third base.

“The moment that I hit that pitch, I knew it was going to score the runners,” said Daniel, who also doubled in the fifth inning. “I’m really proud of this team. Alyssa Porras [winning pitcher] did an amazing job.”

The Bulldogs (6-11 and 5-3 in league) struck in the initial frame when junior Anysia Gonzalez, who also singled in the sixth, lined a two-out rocket to left center for a home run.

In the third, the lead swelled to 2-0 when sophomore Amaya Broyls sliced an opposite-field double down the left field line that scored sophomore Sarah Garelick, who was safe on an error.

The Indians (13-8 and 6-2 in league) cut the advantage in half with a run in the fourth as junior Hannah Talavera doubled to left center to lead off the inning.

It was the first hit for Burroughs against Porras, who retired the first nine batters she faced including three on strike outs.

Porras, a sophomore, was highly effective as she toured seven innings, striking out four, allowing seven hits and no walks across seven innings.

Senior Lauren Lopez then rifled a base hit to right field as Talavera raced over to third base and scored on Miraglia’s single up the middle.

The Indians came within three runs in the sixth inning as senior Brianna Johnson drew a one-out walk and moved to third base on Miraglia’s double to right field.

The run scored on sophomore Mia Storer’s grounder, but the inning came to an end when senior Amanda Flores lined to Porras.

Sophomore Alex Davis singled in the sixth inning for the Bulldogs, but did not score.

Sophomore Kaitlin Escamilla singled twice for the Indians, and both times failed to cross the plate.

“If the girls don’t have it 100 percent, it could go either way,” Burroughs coach Wes Tanigawa said. “I’m hoping that they’re going to see what happened and not like it.”

Miraglia surrendered six hits and fanned five with one walk over seven innings, but some of her offerings found too much of the plate.