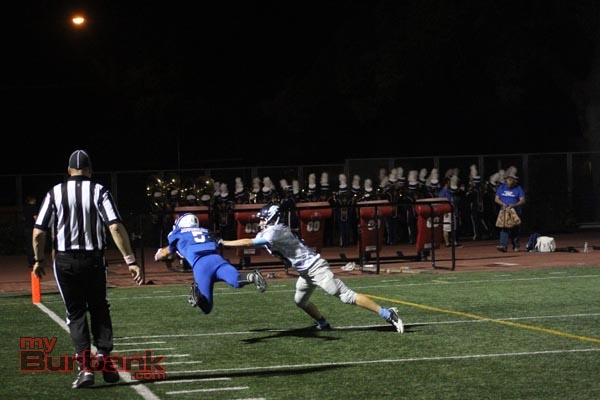 Dorian Housholder catches the lone touchdown of the game for Burbank (Photo by Ross A. Benson)

As the injuries continue to mount, the desire to win doesn’t waver. Despite not having the services of sophomore linebacker Andy Reyes, the Burbank defense rose to the occasion but the same could not be said for the offense in a 24-10 loss to Crescenta Valley Friday night at Memorial Field. 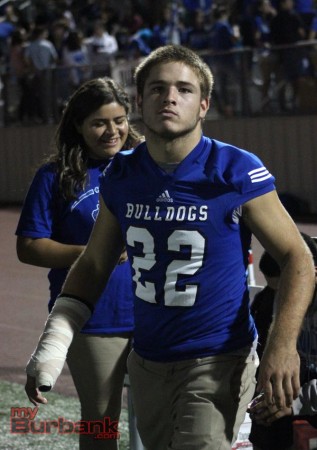 Andy Reyes is out for six to eight weeks (Photo by Ross A. Benson)

With Washington State-commit James Williams sidelined for the season with a torn ACL in his right knee, the Bulldogs lost Reyes for the next six to eight weeks after Reyes dislocated his right thumb the previous week against Pasadena. Reyes led Burbank with 44 tackles through the first four games of the season.

Yet, the defense played its best game of the year thus far by corralling and frustrating the talented quarterback of the Falcons, Brian Gadsby.

Gadsby, a UCLA-commit for baseball, was limited to 168 yards passing and no touchdowns on 11 of 24 passing. Crescenta Valley came into the game averaging 46.5 points per game but could only muster up a pair of one-yard touchdown runs as Burbank flustered the ‘Great Gadsby’ into an average performance. 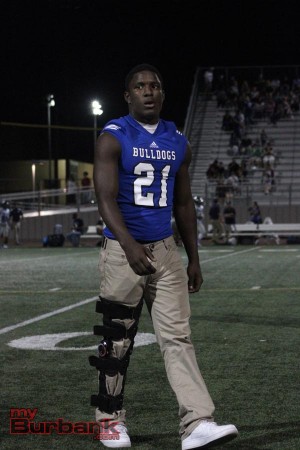 James Williams is out for the year (Photo by Ross A. Benson)

“Our defense was lights out. We were more prepared for this game than any game all year defensively. We just couldn’t put any points up,” Burbank coach Richard Broussard said. “Unfortunately, that’s the way the cookie crumbles. As the play caller, it hurts my heart. We have a lot of work to do.”

On a night that the BHS defense sparkled particularly in the secondary, the offense sputtered as CV dominated the line of scrimmage. The Falcons shut down the Burbank running game allowing a paltry 19 yards on 13 carries (does not include loss of yardage due to sacks).

“We need to run the ball. It’s what we do,” said Broussard. “They shut us down. They did an incredible job up front of controlling the line of scrimmage. No excuses. They got us. They played better today.

“We were a possession away from tying this up. I’m proud of our effort. That’s how we practice every day. We aren’t laying down for anybody.”

Crescenta Valley (5-0, 2-0) forced Burbank quarterback Ryan Meredith into four turnovers (three interceptions, one fumble) including returning a pick-six 53 yards to the house for a 24-10 lead with 8:51 remaining in the game. 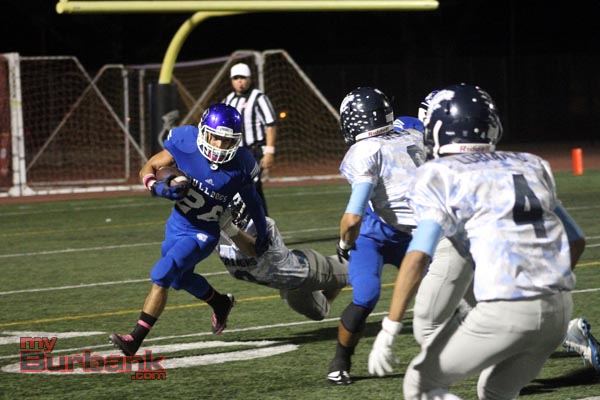 Tony Toledo and company were bottled up on this night (Photo by Ross A. Benson)

Burbank’s offensive line also suffered some setbacks with the loss of three linemen during the course of the past two weeks. With an inexperienced line up front and no threat of Williams in the backfield, the Falcons put eight players in the box and dared Meredith to pass.

Meredith completed 23 of 42 passes for 263 yards and one touchdown but his turnovers were costly as Burbank was held to its fewest points since a 28-7 loss to West Ranch in August of 2012.

The lone bright spot for Burbank on offense were wide receivers Nick Cantong and Dorian Housholder. Cantong caught 10 passes for 107 yards while Householder snared seven catches for 96 yards and a touchdown.

“He’s a go getter,” Broussard said of Cantong. “He’s a phenomenal athlete who has made a burst since the summer. We need to find ways to get him the ball.”

Crescenta Valley jumped out to a 14-0 lead midway through the second quarter on a pair of short touchdowns by Jonathan Jun.

Burbank (3-2, 1-1) scored its only touchdown of the evening on a beautiful 36-yard rainbow pass from Meredith to Householder to cut the deficit to 14-7 with 5:06 left in the first half.

The Falcons took a 17-7 lead into halftime.

Ryan Boyd’s 33-yard field goal for BHS whittled the lead down to seven, 17-10, late in the third period. 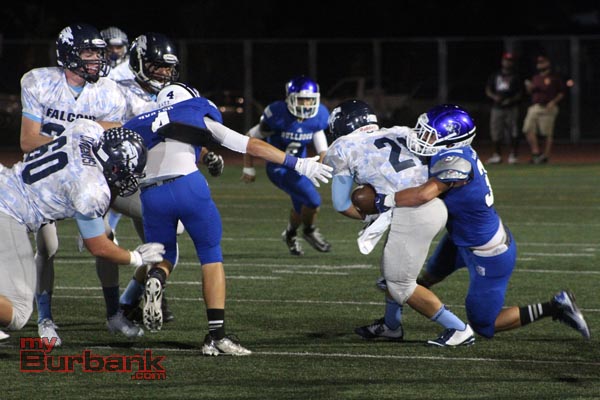 Meanwhile, the Bulldogs’ defensive secondary of Forrest Fajardo, CJ Hunter and Nick Warren did an outstanding job of breaking up passes and keeping Gadsby at bay.

“We know he’s a great quarterback and they’ve been scoring a lot,” Hunter said. “We just tried to cover our guys and try and get to him.”

“He’s a tough guy. He’s very elusive and has a good arm,” defensive lineman Kyle Alvarez added. “Their offense is great. They have formations that are crazy.

“We worked hard all week. It’s just disappointing tonight. The future is still bright. Don’t look down on us because it’s only one loss. We still got it and we are coming back strong.”