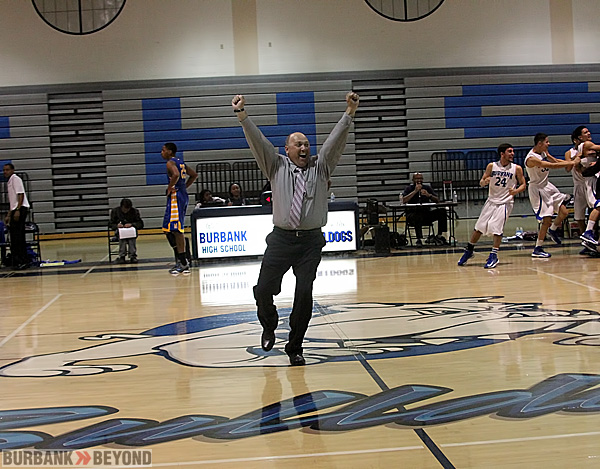 Burbank Coach Jerry DeLaurie raises his arms in triumph after the buzzer-beating victory (Photo by Ross A. Benson) 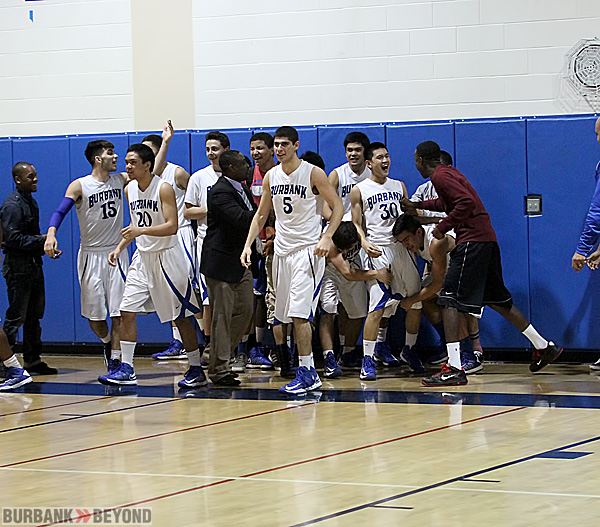 Peter Wongsasitorn , #30, is swarmed by his teammates after his dramatic game-winning shot (Photo by Ross A. Benson)

That’s when the senior canned a 12-foot jumper from the wing in overtime which helped sink the visiting Mustangs, 53-51, and sent his teammates rushing toward him in mass celebration as the clock ran out.

“I didn’t play a lot of minutes,” Wongsasitorn said. “My coach trusted me. I wanted to make something happen. Those were my only points.”

“The basket won the game,” Burbank Coach Jerry DeLaurie said. “But it couldn’t have happened unless Peter takes the charge. That was huge. Tonight we took four charges.”

For much of the evening it appeared that Muir (15-11, 8-4 in league) would run away and hide in this thriller, but it wasn’t to be as Burbank held the Mustangs scoreless in overtime, and staged a rally that will be talked about for some time.

“That’s a different Burbank team,” DeLaurie said. “That team is very unselfish. We passed the ball.”

Burbank (14-11, 6-6) trailed by seven points entering the fourth quarter, and outscored the Mustangs, 17-10, in the final stanza as senior guard Sarkis Karium tallied five of his eight points.

Burbank’s strategy was to move the ball on the perimeter, and then find a cutting player in the paint. It resulted in points most of the time. 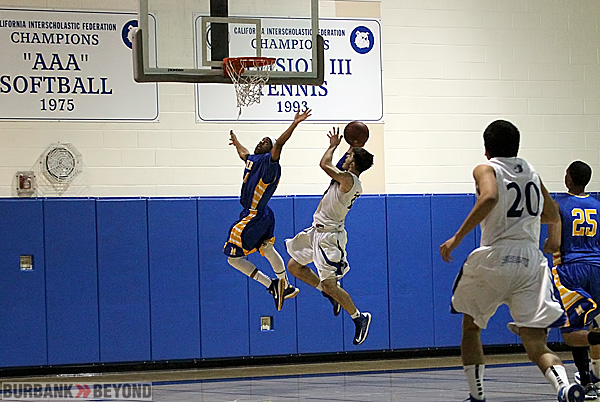 Richard Elmoyan scores two of his 16 points (Photo by Ross A. Benson)

The Bulldogs, who avenged an earlier setback to the Mustangs, 76-72, a few weeks ago, made seven of 12 attempts from the field in the fourth quarter after making only five of 14 in the third quarter.

The best player on the floor was Mitchell, who poured in a game-high 31 points, while making a variety of shots including four three-pointers, and a bevy of shots in the painted area.

Mitchell had 18 points in the second half as the Mustangs converted 11 of 26 for 42.3 percent.

Muir failed on its two attempts in the extra period, while the Bulldogs were successful on one of six. The lone field goal by Wongsasitorn produced the upset.

Burbank out-rebounded the taller and more athletic Mustangs, 43 to 39, on the glass.

The Mustangs used speed and size in the opening quarter to build a 15-11 lead, as Mitchell scored nine points. 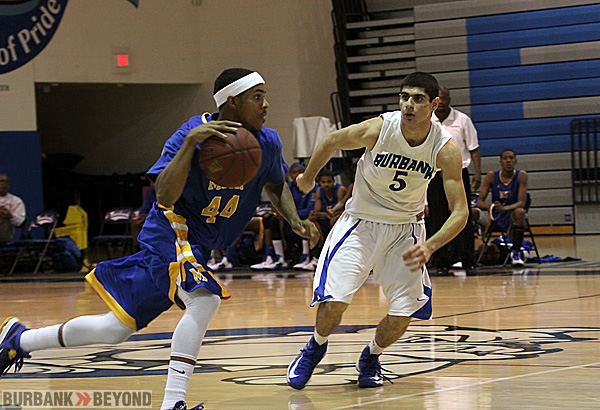 Burbank then utilized a zone defense in the second quarter that changed the flow of the game as it limited Muir to 12.5 percent (two of 16) from the floor.

While  the Bulldogs dug in defensively, it was at the offensive end that Elmoyan shined, adding seven points as Burbank outscored Muir, 13-8, and took a 24-23 lead into the half.

Muir’s Taturs Mayberry was second in the scoring column with nine points, adding five points in the third quarter when the Mustangs outscored the Bulldogs, 18-10.

The fourth quarter and overtime belonged to Burbank as it continued its surprising season.

Burbank entertains Hoover on Tuesday at home at 3:30 p.m. Another Bulldog win would clinch an automatic playoff berth for the CIF playoffs.