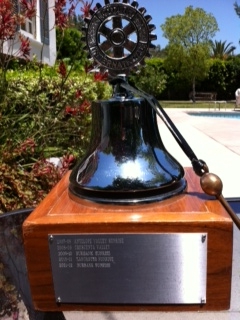 At the Rotary District 5260 Conference in North Hollywood on June 8 & 9, Burbank Sunrise Rotary was awarded the very highly coveted and hotly contested Silver Bell as the best small club in the 33-club District for the past Rotary Year (July 1, 2011 – June 30, 2012).

District Governor Tom Hardy presented the award to club President Rod Gregson in recognition of outstanding achievement for all of the club’s hard work in numerous areas of Rotary endeavors.
Governor Tom also presented Rod with the Changemaker Award for the club, 1 of only 7 in the District to be so awarded, “For making positive and significant change in the community and the world” for meeting demanding criteria in all five of Rotary’s Avenues Of Service, along with a “100% Paul Harris Fellow Club” banner for everybody in the club being a Paul Harris Fellow, an award given for donating money for Rotary International’s Polio Plus program.
These awards were the culmination of a LOT of hard work and dedication to the Rotary motto of “Service Above Self” over the past year.  For those involved in Rotary, the Silver Bell is a really big deal.
Burbank Sunrise Rotary does not do all that they do, helping out all those both locally and globally less fortunate than themselves, in order to get awards.  They would still do everything even if there were no awards, but it is always nice to get the icing on the cake.
If you want to be part of a very active, award-winning, and very dedicated club of people committed to helping others and making this a better Burbank and world, come join them for a meeting and see for yourself what they are all about or check them out at www.burbankrotary.com).  Join them for a meeting and they will buy you breakfast!
Burbank Sunrise Rotary meets Tuesday mornings at 7:15 in the newly remodeled Holiday Inn at 150 E. Angeleno Ave., just east of the I-5 freeway, 1 block south of Olive Ave.