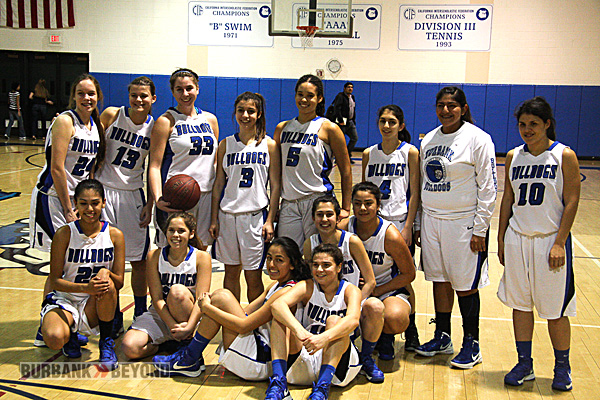 Survive and advance. With doubt starting to creep in, the Burbank girls basketball team dug deep and weathered the storm. The Bulldogs capped off their first round CIF Division IA playoff game on a 9-0 run to capture a nerve-wracking 53-41 win against El Toro.

The Bulldogs victory propelled them into a second round matchup at No. 2 seed Canyon Springs next Wednesday.

“We got rattled. We weren’t nervous when we started but you could feel we were getting a little tight. But I thought we finished strong and hopefully got rid of the jitters,” Burbank Coach Bruce Breeden said. “We survived. There’s like 16 teams that would like to be in our spot tonight. So I am pleased.”

Leading 44-30 late in the third quarter and in full control of the game, Burbank went cold from the field while El Toro gained confidence on each possession. The Chargers’ Meagan Ballard knocked down a three pointer to end the third quarter to cut the deficit to 44-35 and followed that up with another trey with 7:11 left in the game to bring El Toro within six points.

After a Burbank turnover, one of four in the quarter, Christen Morris hit a triple from the top of the key and suddenly a commanding 14-point lead by the Bulldogs had been whittled down to just three, 44-41. Burbank proceeded to commit back to back turnovers and a missed layup on its next three possessions. Fortunately for the Bulldogs, El Toro failed to capitalize on the mistakes.

With less than three minutes remaining, Burbank settled down and finished the game on a strong note. Senior Aja Locke rebounded a Courtney Seidler miss and was fouled on the put back. Locke converted both free throws to stop the 11-0 run by the Chargers.

Two possessions later, Burbank ran a well-executed inbounds play with Sharis Ghazeri finding a wide-open Ashley Linda on the left wing for an 18-foot jumper that she drilled to give BHS a 48-41 lead with 1:48 left. El Toro promptly called timeout but to no avail.

Jamie Gonzalez buried a three-pointer from the left corner that tickled the twine with nothing but the bottom of the net. After an El Toro miss, Ghazeri came down, split the defense and dished a beautiful pass to Seidler for the basket setting off a wild celebration for the Bulldogs.

“I think we just got too complacent with our lead. We got a little bit cocky towards the end,” said Seidler, who scored 16 points for BHS. “If we play like that, we won’t make it far at all. But if we come out and play like we did at the beginning, we will be fine.”

Burbank (16-12) roared out of the doghouse with an explosive 22-13 lead at the end of the first quarter and a 34-24 advantage at the half. The lead ballooned to 41-25 after Locke made a five-foot jump shot. El Toro mounted a rally but Burbank was intent on surviving and moving into the next round.

Gonzalez scored 11 points, Ghazeri added nine and Locke chipped in with eight in a well-balanced effort for the Bulldogs.

“We have nothing to lose on Wednesday,” Breeden said. “Let’s go roll the dice. Anything can happen.”