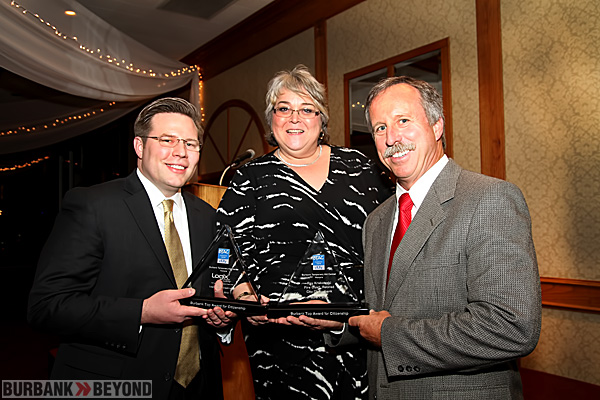 Friday night the Burbank Temporary Aid Center (BTAC) held its 10th Annual Gala event, this year saluting a former Burbank Fire Chief and a local credit union for stellar records of community service and compassion.  Staff of the charitable agency that for 39 years has offered services and assistance to families, seniors, the homeless and virtually any Burbanker in need, said accounting for the event is not yet complete.  But initial figures indicate this year’s has been the most successful fundraiser thus far.

“We rely on this event to replenish our food pantry and our budget, and we deeply appreciate the support,” said Barbara Howell, BTAC’s Chief Executive Officer.  “The community has enthusiastically seconded our picks for the honorees to receive this year’s “Burbank’s Top Award for Citizenship.””

In addition to Krakowski’s 32 years of service for the city, beginning as a fire fighter, and ultimately serving as Interim City Manager, BTAC also cited his long record of service to the Boy Scouts, the Fire Chiefs Association and the National Forest Service.

Logix F.C.U., founded in Burbank in 1937, was chosen for its long record of supporting a lengthy list of organizations including, but extending well beyond, BTAC.  A partial list includes Penny Lane Centers, For The Troops, Santa Clarita Valley Senior Center Foundation, Burbank Family Service Agency, and Leadership Burbank.

Logix was also cited for its “Volunteer Time Off” program, giving employees paid time off to volunteer for BTAC and others.  An especially popular activity for the volunteers has been working on BTAC’s annual “Santa’s Room” program, collecting and sorting toys, then helping client families “shop” Santa’s Room for Burbank’s neediest kids.