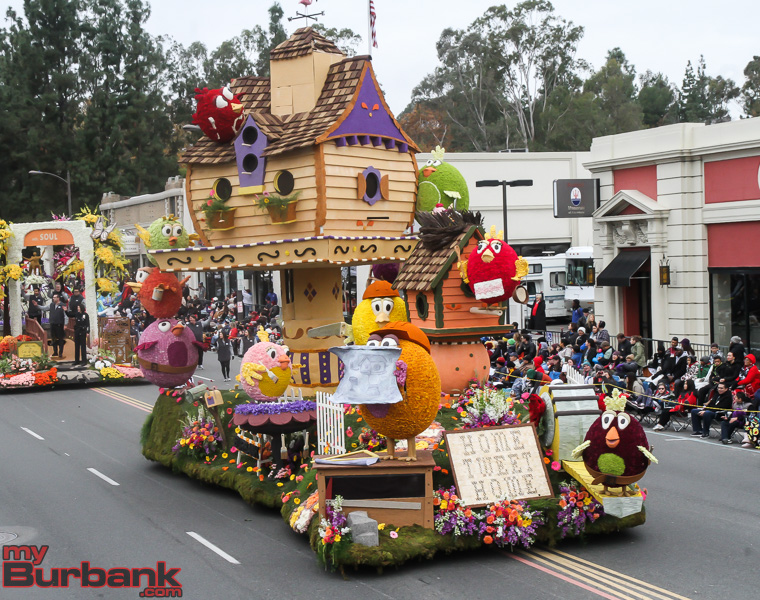 The Burbank Tournament of Roses Association’s entry into the 128th Rose Parade was “Home Tweet Home” was the Associations 85th entry and the 70th consecutive float into the Rose Parade.

The 128th Rose Parade’s theme ‘Echoes of Success’  was what the association was given to work with and their float depicted a flock of birds supporting new parents by helping them build a bigger home.

Burbank’s entry has been self built by community members since the group formed many years ago. This year they had over 300 people listed as working on, volunteering, or helping make “Home Tweet Home” a dream come true. The members of Burbank Tournament of Roses cut, glued, applied some 60,000 flowers to this years entry.

Burbank’s float is limited to the types of awards the Pasadena Tournament of Roses awards to floats. This year the Association didn’t come home with  an award from Pasadena but won awards to the volunteers and citizens of Burbank who are always proud when they see the entry in the parade.

The Burbank float will remain on display in Pasadena at Sierra Madre & Washington Blvd at post parade events till Tuesday Evening at which time it will return to Burbank and be on display at the corner of Olive Avenue & Glenoaks till Sunday evening.

Members of The Burbank Tournament of Roses Association will be on hand selling Souvenirs accepting donations and signing members of the public up who would like to be members who Association. They will also  be running the  the Animation at specific times depending on weather, fuel and other conditions.

For Burbank residents who haven’t ventured to a Rose Parade as of yet our photographs captured a couple of the sights that aren’t covered when watching the parade from your favorite sofa.