Several Measure S bond projects were completed during the recent summer break and plans for more are in the works for the summer 2015, Burbank Unified officials reported to the Board of Education Thursday, September 18.

Project and accounting reports of work completed to date have also been posted on the Measure S webpage, said David Jaynes, Assistant Superintendent of Administrative Services. Photos of recently completed work are also on the page.

“As one of the principals described, it’s like walking on the moon, sort of because you bounce around,” Jaynes to the school board. “The kids love it.” 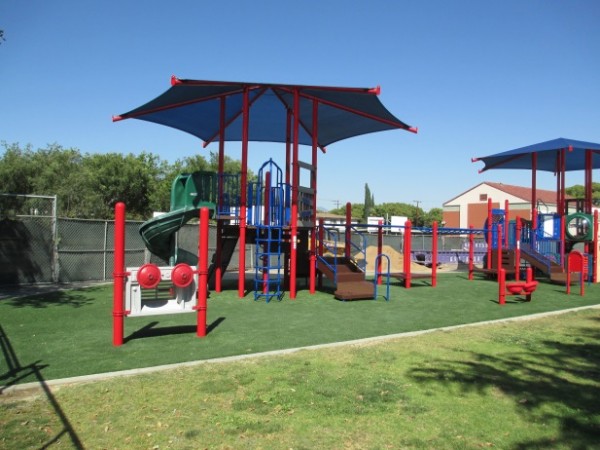 Emerson, Hart, Roosevelt and Miller Elementary Schools all received new exterior painting before the start of the school year in August.

Other fixes made included broken water main at Burroughs High School, a water pipe break at Stevenson and some work at Luther Middle School to correct deficiencies still in place from the former bond measure.

Projects upcoming for the 2014-15 school year include an upgrade of the Jefferson Elementary playground and mini-modernizations at Emerson, Miller, Washington, Jordan and Mann Development Center.

Additional plans include installation of solar panels at the District Service Center and construction of the Data Center.

Because of increased enrollment and reduced class size for grades K-3, the modulars are also under review, Jaynes added.

Safety railings at Burroughs and Burbank High Schools, HVAC at Muir and exterior painting at Edison, Jefferson, Stevenson, Washington and Jordan are some of the projects Jaynes anticipates completion on by end of summer 2015.