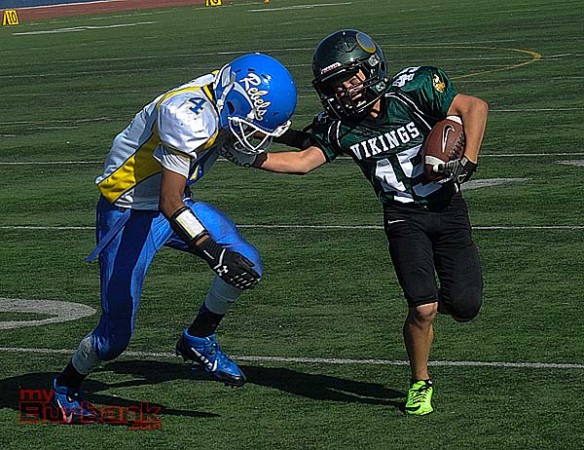 Fast and furious could have been the theme song as the Burbank Vikings Junior Green lambasted the West Valley Rebels, 42-0, on Saturday. It marked the 17th consecutive victory for the defending Super Bowl Champions.

The romp began when running back Loyal Terry (35 yards on two carries) scored on a 37-yard counter that made it 6-0, and was set up after running back Chandler Auguste’s 13-yard sweep. Auguste finished with 46 yards on three rushes.

It swelled to 12-0 when quarterback Bryce Young found running back Dante Coxsom with an 80-yard screen pass that featured Manny Pimentel’s block downfield.

Auguste’s first touchdown as a Viking was a 32-yard trap as the lead became 26-0. Sebastian Leal’s 14-yard run helped the drive, and Leal’s two-pointer made it 28-0.

Crucial runs up the middle by Trystan Daggs and Maxwell Cotton set up Young’s five-yard quarterback sneak for a 34-0 edge. Daggs converted the two-point attempt to make it 36-0, and Daggs later added a 10-yard run that made it 42-0 in the fourth quarter.

The Vikings (3-0) were stingy on defense holding the Rebels to 32 total net yards, while Jake Moore batted a ball into the air which Young intercepted, and Cotton recovered a fumble.

Sixty points filled the scoreboard when the Burbank Vikings Midget Green faced the West Valley Rebels, and the scoring commenced early for the Vikings who claimed a 36-24 decision.

On the opening play quarterback Tobi Baklayan hit wide receiver Cooper Meek over the middle with a 35-yard scoring toss, and early in the second quarter the Vikings forged a 12-0 lead when Baklayan drilled Meek with a 50-yard pass.

The Rebels had the ball deep inside their territory when Tadashi Butler was about to tackle the running back in the end zone for a safety.

But he attempted to throw the ball which Kenji Butler and Ali Maaz each grabbed for an interception and touchdown that made it 18-0.

The Vikings (3-0) pulled in front 24-6 at the start of the third quarter when Baklayan located wide receiver J.J. Clark for a 20-yard touchdown.

Baklayan led the Vikings on a nine-play, 82-yard march that was capped off when he drilled Clark with a 13-yard pass and a 30-12 lead.

Bryce Whitaker drove the Vikings on a 57-yard, five-play excursion and found Clark with a 13-yard toss that made it an 18-point spread.

Two-point conversions can be exciting, and it enabled the Burbank Vikings Pee Wee Black to edge the Lancaster Jets, 16-14.

With the score knotted at 14-14 after Jonas Baklayan scored on a 25-yard burst down the sideline early in the fourth quarter, halfback A. J. Vargas’ two-point try behind the blocking of Lorenzo Resendez, Josh Idleburg and Anthony Torabyan provided the winning points.

The Jets led 6-0 after one quarter, but the Vikings (3-0) responded with running back Dahnte Russell’s 30-yard sweep and four seconds left before the half.

Diego Reynaldo’s runs up the middle aided the drive, and Baklayan’s two-point conversion made it 8-6.

Lancaster began the second half with a scoring drive and converted the two-pointer for a 14-8 lead, only to see the Vikings tally the next eight points, and Russell recovering the onside kick by Burbank which took time off the clock.

Josh Johnson tallied 175 all-purpose yards and scored three touchdowns, while quarterback Chase Tachau passed for 50 yards and had a pair of touchdowns. One of Tachau’s scoring tosses went to wide receiver Tyrae Ross.

Matty Parras had numerous tackles and one sack to pace the Vikings (2-1) who will next play the Valley Bengals at Burbank High on Saturday with a 7:15 p.m. kickoff.

It took a strong effort from the offense and defense in order for the Burbank Vikings Bantam White to knock off the Santa Clarita Apaches, 26-22.

The Apaches scored on their initial possession, but the Vikings (2-1) received an 80-yard scoring jaunt from quarterback Jordan White.

After defensive hits from linebacker Rudy Perez and defensive backs Paden White and Mario Rodriguez, the Vikings were back in business which set in motion running back Nick Schlandler’s 45-yard sprint that gave Burbank a 12-6 cushion at the intermission.

The second half opened with White hitting tight end Maurice Johnson with a 20-yard pass, and he then raced 40 yards for the score while the two-pointer made it 20-6.

Santa Clarita was able to score a pair of touchdowns and a couple of two-pointers, but White raced into the end zone from 20 yards out for the game-winner.

On the drive White connected with tight end Sean Durmick with a 10-yard toss and a 30-yarder to wide receiver Lorenzo Leal.

The Vikings received big defensive tackles late in the game from Perez and defensive back Paden White which prevented the Apaches from moving the ball.

NOTE: The game summaries were sent in by the head coaches of their respective Vikings teams. If your team’s recap is not posted, please consult with the head coach. ALL Vikings coaches were asked to submit recaps after each week’s games.