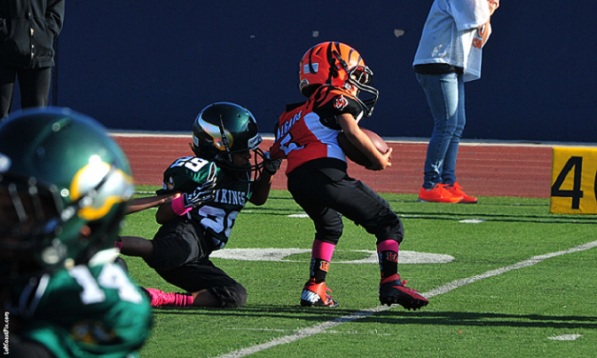 This is becoming old hat for the Burbank Vikings Junior Green, who for the second consecutive regular season went undefeated after Saturday’s 42-0 blitz of the Highland Bulldogs, and now prepare for the playoffs. The Junior Green have won 22 in a row.

The Vikings (8-0) pulled ahead 12-0 after the first quarter, and then scored 22 points in the second quarter.

Burbank’s assault commenced when quarterback Isaac Cordova located running back Dante Coxsom with a 29-yard pass down the right sideline that made it 6-0.

The Vikings took charge 12-0 after Cordova, who completed all three passes attempts for 88 yards, hit Sebastian Leal with a 54-yard bomb after runs by Kade Lewis (38 yards on six carries) and Chandler Auguste.

Fullback Loyal Terry rambled 78 yards for a touchdown that made it 18-0, and Leal’s two-point attempt gave the Vikings a 20-0 cushion.

The lead became 26-0 when Lewis darted into the end zone from 17 yards out, while safety Bryce Young intercepted a pass and ran it back 19 yards for a touchdown that pushed the Vikings’ lead to 32-0. Cordova, who finished with 42 yards rushing on eight carries, added the two-pointer that made it 34-0.

Max Cotton’s 52-yard pick for a score and Cordova’s 16-yard run were called back because of penalties, but Auguste’s 16-yard stroll counted as the Vikings bolted ahead 40-0. Cordova’s two-pointer put the icing on the cake.

The Burbank Vikings Midget Green followed suit as they also closed the regular season without a loss after belting the Lancaster Jets, 44-6.

The Vikings, who will be the No. 1 seed in the playoffs and will have the home field as long as they win, opened the scoring with a 50-yard drive that was capped off when quarterback Tobi Baklayan located the end zone from seven yards out and 8:09 left in the opening quarter. Baklayan’s two-point pass to Niko Candido made it 8-0. The march also included a 43-yard toss from Baklayan to Anthony Spearman.

The Vikings (8-0) drove 54 yards and Spearman scored on a four-yard burst with 4:18 showing in the same quarter that made it 14-8. Baklayan had a 29-yard scamper and Baklayan’s pass to Jime De Young on the two-point try made it 16-8.

Candido recovered the kickoff, but Baklayan was later picked off. The Jets took over at their 15-yard line, and Max Birch tackled the running back for a nine-yard loss. On fourth down Tadashi Butler chased and tackled the punter.

De Young’s three-yard run off tackle with 11:47 left in the second quarter provided the Vikings with a 22-6 lead.

Lancaster’s next drive was halted when Zion Chavez, Calvin Laughlin and Spearman, who ripped the football from the Jets’ quarterback, all handed out jarring tackles.

Cooper Meek’s 26-yard field goal was wide left, but Chavez blocked a punt and returned the ball 22 yards for a score that made it 28-6 and 5:25 left before the half. Baklayan’s two-point run gave the Vikings a 30-6 lead.

After stopping the Jets, Burbank took over at the Lancaster 44-yard line. Soon Max Cotton’s 16-yard run and Baklayan’s 25-yard scoring dash propelled the Vikings ahead 36-6 with 1:40 left in the second quarter. Baklayan converted the two-pointer to make it 38-6.

The Vikings’ final touchdown was a thing of beauty as they marched 82 yards on 17 plays as Spearman dented the end zone from four yards out.

The Burbank Vikings Midget Green will next play the Simi Valley Patriots, who are 4-4 and have won four straight games.

The Burbank Vikings Bantam White placed a capper on the regular season with a 24-14 triumph over the Canyon Outlaws, and also awaits the postseason.

It didn’t take long before the Vikings (5-3) were on the board three plays into their opening drive when fullback Maurice Johnson scored from 15 yards out.

Before the tally Vikings quarterback Jordan White accounted for 40 yards rushing, and his two-point attempt was successful as Burbank led, 8-0.

The Outlaws matched the Vikings as they drove downfield and scored and also added the two-point try that knotted it at 8-8.

With 1:30 left before the intermission, spectacular blocks from guard Atticus Coots, tackle Shant Hovsepian, center Isaiah Martinez and tackle Frankie Cervantes all helped lead Johnson into the end zone after an option pitch from White that made it 14-8. White’s run for the two-point conversion was successful and the lead became 16-8 at the half.

The Vikings’ defense was stingy as they picked off three passes in the third quarter and were turned in by cornerback Luke Rogers (who finished with three interceptions), cornerback Nick Schlander and linebacker Johnson.

Canyon was able to get into the end zone to make it 16-14, but was turned back on the two-point try as defensive tackle Richie Flores, linebacker Mario Rodriguez and linebacker Rudy Perez converged on the tackle.

The Vikings added a final touchdown as Johnson dragged defenders into the end zone. Johnson was assisted by runs from White, and also picked up a well-timed block from wide receiver Lorenzo Leal. White’s two-point try made it a 10-point spread.