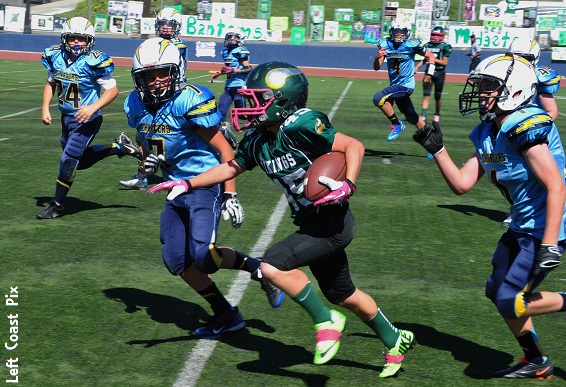 In what amounted to a glorified scrimmage, the Burbank Vikings Junior Green toyed with the Agoura Chargers and walked away 49-0 winners on Saturday. It marked the 20th consecutive win for this talented group of young boys who began the streak last season as Midget Green and won the Super Bowl in the process.

The Vikings (6-0) held the Chargers to 44 total net yards, and were led defensively by Max Kushner, who had three solo tackles (all for losses) and finished with six tackles, while Michael Sorokin added five tackles and  returned a fumble for a touchdown.

The scoring began when quarterback Bryce Young (five of seven for 135 yards) spotted wide receiver Sorokin with a 79-yard rocket as the Vikings led 6-0. Tailback Dante Coxsom’s two-point run made it 8-0.

On fourth and four Young’s 24-yard scramble ended up in the end zone which gave the Vikings a 14-0 lead. Young’s screen pass to Coxsom padded the advantage to 16-0 and capped the opening quarter.

The Vikings led 22-0 at the intermission. Young’s 14-yard slant pass to wide receiver Isaac Cordova set up Young’s 22-yard toss to Cordova that accounted for the final touchdown of the first half.

Maxwell Cotton jarred the football loose from an Agoura running back, and Sorokin returned the sphere 20 yards for a score that made it 28-0. Manny Pimentel’s extra point gave the Vikings a 29-0 lead.

Reserve quarterback Franco Alonso drove the Vikings downfield and the march concluded when running back Chandler Auguste (59 yards on 10 carries) scored from five yards out.

Cotton had runs of seven and 24 yards and then added a four-yard dive that closed out the third quarter to make it 43-0.

Jake Moore pushed a Chargers’ offensive lineman into the punter which counted as a blocked kick and the play gave the Vikings possession at the Agoura 17-yard line.

From there Auguste and Cordova each had runs that advanced the ball to the one-yard line, and center Adrian Aguirre, who was moved into the quarterback position, scored the final points.

The Burbank Vikings Junior Black suffered a 34-22 setback to the Simi Valley Patriots.

Simi Valley intercepted quarterback Chase Tachau’s “Hail Mary” toss on the game’s final play which was returned for a score, and 50 seconds earlier the Patriots also located the end zone.

The Vikings were able to move the ball effectively in the opening half, but fatigue, 90 degree temperatures and only 16 players suiting up all led to a rough second half.

Tailback Jackson accounted for 85 yards and a touchdown in the opening half, while wingback Joshua Johnson totaled 85 yards on the ground with a score.

The Vikings’ defense was paced by Kayode Agbalaya and Jake Barraza, who limited the bigger Simi Valley running backs to less than 50 yards.

The Vikings own a 2-3 record and look to get back into the winning column when they face the Santa Clarita Warriors on Saturday at Burbank High.

Darnell Williams, #28, was a run-away train every time he had the ball. He also made great tackles while on defense too.