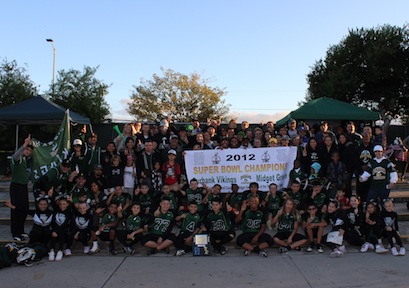 Midget Green captured the first Pacific Youth Football League Super Bowl title by a team from Burbank in any division with a near flawless performance on Saturday en route to a 34-6 victory over Ventura Black at Thousand Oaks High School.

It wasn’t supposed to be this easy but a dominant second half by the Vikings (12-0) secured the championship and capped an undefeated season. Prior to PYFL Super Bowl XX, only three teams from the city of Burbank made an appearance in the final game but neither was successful.

“We told the boys to play the game they deserve,” Vikings Coach Corey Enman said. “This is the best group of players that I have ever coached. I am proud that we made history together.”

An interception by Kade Lewis led to the first score of the game as Dante Coxsom ran for an 18-yard touchdown on fourth down and nine. Loyal Terry rushed for the 2-point conversion and the Vikings led 8-0 with 3:00 remaining in the first quarter.

A few possessions later, the Packers answered with a 24-yard touchdown scramble by quarterback Isaac Garcia. The 2-point attempt was unsuccessful and the Vikings maintained an 8-6 lead.

The combination of Coxsom and Terry tortured the Packers with significant gains for the rest of the half, setting up a short 3-yard touchdown run by Sebastian Leal with 2:55 left in the second quarter. Max Cotton and Terry had back-to-back sacks with less than a minute to go on the Packers next possession and the Vikings took a 14-6 lead into halftime.

A common theme throughout the regular season and especially during the playoffs was the noticeable difference in stamina between the Vikings and their opponents. The Vikings’ string of dominant second halves continued as Coxsom bounced to the outside and scored on a 41-yard touchdown run with 9:55 remaining in the third quarter. Leal ran for the 2-point conversion and the Vikings took a commanding 22-6 lead.

The Vikings’ defense continued to batter the Packers as Lewis had a debilitating sack for a 15-yard loss on fourth down in the final minutes of the third quarter. Diego Santillian added a crushing tackle at the line of scrimmage on the Packers next possession for another fourth down stoppage to begin the fourth quarter.

On the very next play, Coxsom outran the defense 81 yards for his third touchdown of the game.  The Vikings took a 28-6 lead with 10:15 left in the game. After another turnover on downs by the defense, Coxsom put the icing on the cake with a 10-yard touchdown run, his fourth of the game.

“It feels awesome to score four touchdowns in the Super Bowl,” Coxsom said after the game, “but this was a total team effort. We worked hard for this.”

A first round exit in last year’s playoffs left a bitter taste in the mouths of Enman and assistant coach Dan Moore. They immediately began laying the groundwork for this dominant championship run shortly after last season’s year-end banquet.

“We learned from our mistakes,” Enman said. “We never overlooked an opponent [this season] and we literally took it one week at a time.”

Months before the season started, the Vikings participated in fitness combines and had regularly scheduled workouts

that included flipping tires and pulling sleds. This pre-season conditioning prepared the Vikings for their late game dominance towards the end of the season.

“Just like last week,” Cotton said in reference to last Saturday’s semi-final contest against Lancaster, “whoever hit the hardest in the fourth quarter was going to win the game.”

The Vikings’ superb effort earned them a piece of PYFL football history in Burbank and the right to be called ‘Super Bowl Champions’ forever.