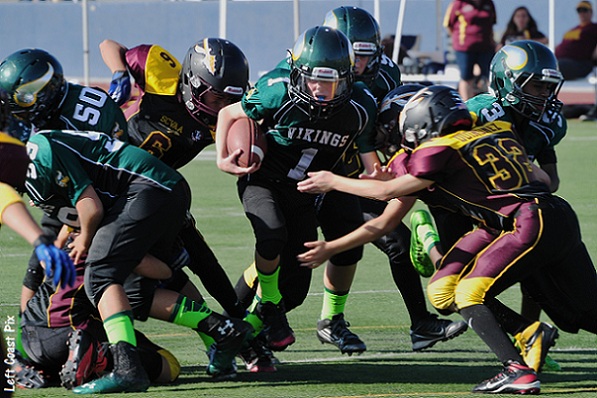 You know a team means business when instead of kicking off and playing defense, an onside kick is attempted.

All of this was merely a prelude to the Burbank Vikings Pee Wee Black’s shredding of the North Oxnard Warriors Red, 34-8, on Saturday at Oxnard High. The Pee Wee’s are now 4-0.

The 18-point first-quarter blitz began with Joe Kazarian pouncing on the football to begin the contest which led to Jonas Baklayan scoring from four yards out and a 6-0 lead.

Kazarian then swallowed up a bad snap which set in motion quarterback Dahnte Russell’s 18-yard keeper that made it 12-0. Russell wasn’t done as he found Baklayan with a 44-yard toss for an 18-0 lead.

North Oxnard finally broke the streak with a touchdown and a two-point conversion in the third quarter, but the Vikings rebounded with scoring runs from Baklayan and Russell in the final stanza.

Ricky Garcia and Jake Rosen were instrumental throughout the game, but especially in the fourth quarter as each made several open-field tackles for the Vikings, who will host the Moorpark Saints at Burbank High with a 9 a.m. kickoff.

Getting off to quick starts is becoming a Burbank Vikings Junior Green staple as they drilled the Santa Clarita Warriors, 42-0.

In four wins the Vikings (4-0) have tallied exactly 42 points, and have posted three shutouts which speak to their stout defense.

The Vikings’ offense isn’t too shabby as it bolted to a 16-0 lead after the first quarter when free safety Bryce Young intercepted a pass and ran 61 yards for the touchdown and a 6-0 advantage. Sebastian Leal’s two-point run pushed the lead to 8-0.

The Vikings’ second score of the quarter was Chandler Auguste’s 16-yard gallop, and was made possible after Leal’s 15-yard burst on a pitch. Loyal Terry’s two-pointer made it 16-0.

A 20-point second quarter put the contest out of reach for the over-matched Warriors. The scoring began when quarterback Issac Cordova (three completions for 80 yards) hit tight end Mike Lopez with a 34-yard bullet to make it 22-0. Cordova’s 30-yard bomb to wide receiver Kade Lewis made it 28-0, and was set up by Cordova’s 20-yard rocket to Leal (21 yards on four rushes).

Auguste (36 yards on five carries) also had an eight-run waltz that made it 34-0, Auguste’s two-pointer gave the Vikings a 36-0 cushion, and Young’s five-yard keeper was the game’s final points.

The Burbank Vikings Bantam White moved past the Santa Clarita Indians, 26-0, as running back Paden White’s 35-yard run was followed by fullback Maurice Johnson’s initial score that made it 6-0. Quarterback Jordan White’s two-point pass extended the margin to 8-0.

Atticus Coots recovered a fumble and early in the second quarter Jordan White scored on a 25-yard romp that was secured by blocks from running back Lorenzo Leal, tackle Shant Hovsepian and guard Coots.

With the clock showing less than a minute left before the intermission, Jordan White’s 65-yard dash made it 20-0 for the Vikings (3-1).

Key gains on the ground in the third quarter by running back Nick Schlander and Johnson paved the way for Jordan White’s 10-yard scamper to make it 26-0.

Linebacker Rudy Perez had two interceptions, tackle Joshua Del-Cid and linebacker Mario Rodriguez each had important tackles late in the contest, and kicker Shane Mullins finished with more than 100 yards in punts.

(NOTE: the game summaries were turned in by the head coaches of their respective teams. ALL coaches were asked to send in recaps after each game. Only the Pee Wee Black, Junior Green and Bantam White responded. If you are a parent and would like to see your son’s information published, make sure your coach responds to our repeated requests!)