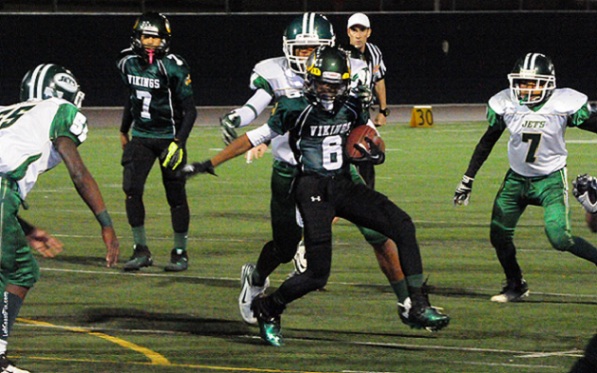 What changed for the Burbank Vikings Junior Green was the venue and temperature, but not the result as they once again knocked off the Lancaster Junior Jets, this time 42-18 in a Pacific Youth Football League East Conference second-round playoff game on Saturday under considerably warmer conditions.

Make that 24 straight wins for the defending Super Bowl champions.

The Vikings (10-0) took care of the Jets a season ago in the title match with the temperature hovering at 57 degrees, and continue their postseason drive after putting together an offensive showing that featured tailback Dante Coxsom and fullback Loyal Terry each breaking the century mark.

Not to be outdone was Sebastian Leal, who added 94 all-purpose yards and located the end zone via the ground and through the air.

Leal’s 15-yard scamper offset the Jets’ star running back Jamal Bell, who raced 32 yards down the left side line for a touchdown that made it 6-0 on the game’s first play from scrimmage.

In fact these were the first points the Vikings Junior Green allowed at home this season.

The Vikings tacked on 24 points in the second quarter and took a 30-6 lead into the half behind the strength of a balanced assault.

Quarterback Bryce Young, who connected on four of seven pass attempts for 87 yards with an interception, found Leal with a 23-yard toss that made it 12-6, and when Young drilled wide receiver Isaac Cordova with a two-point pass it became 14-6.

When Terry (six carries for 113 yards) took an inside handoff and raced 48 yards, Burbank’s lead swelled to 14 points and Young’s two-point run gave the Vikings a 22-6 lead.

Just before halftime Coxsom (137 yards on 14 rushes), an All-Star, plowed his way into pay dirt from five yards out as the Vikings surged ahead 28-6 before Leal’s two-pointer catapulted Burbank in front by 24 points.

There was no scoring in the third quarter, but the Jets closed the gap and came within 30-12 on the opening series of the fourth quarter when Bell took a screen pass and bolted 80 yards for a touchdown.

On Burbank’s next possession the Jets picked off Young and brought the football back to the Vikings 25-yard line.

But Leal returned the favor by intercepting Lancaster’s field general which made possible Coxsom’s second touchdown that made it 36-12. Manny Pimentel’s extra-point kick failed.

On the drive Young found Cordova (64 yards on three receptions) with a 53-yard pass and an eight-yard toss.

After the Jets were forced to punt, Terry had perhaps the most remarkable scoring run of the season when he pushed aside four would-be Lancaster tacklers as the Vikings cemented a 30-point lead.

Lancaster scored late in the fourth quarter and moved within 24 points when a Jets’ ball carrier fumbled into the end zone which a teammate recovered.