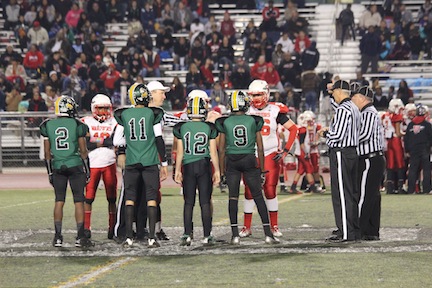 With a 37-12 loss to North Oxnard Black on Saturday, Senior Green was unable to become the second Burbank Vikings team of the day to win the Pacific Youth Football League Super Bowl at Thousand Oaks High School. Midget Green beat Ventura Black earlier in the day to become the first team from Burbank in any division to win the title game in the 20-year history of the league.

Senior Green (10-2) had its hands full with its undefeated opponent. The Warriors were seeking their third straight Super Bowl title and hadn’t lost a game since Super Bowl XVII in 2009 when they were in the Bantam Division. It didn’t help that the Vikings were also facing a second opponent on Saturday: themselves.

The Vikings uncharacteristically had several turnovers, dropped passes and missed tackles throughout the contest.

“We didn’t bring our ‘A’ game today,” Vikings Coach Joe Manasewitsch said. “We didn’t play like we can. We deserved a better outcome.”

The Warriors had a balanced attack and were able to score with relative ease on the ground and in the air. They added a 31-yard touchdown run and a 30-yard touchdown pass in the second quarter to take a 30-6 lead at halftime.

The Vikings’ final scoring drive came late in the fourth quarter when Guy Gibbs connected with Jake Kelley for a 20-yard touchdown pass. Kelley leaped high in the air and out-wrestled the defender for the ball.

Senior Green will graduate all but two of its players to high school next year. The run to the title game was merciless at times with five total shutouts and a scoring average of 41 points per game. The Vikings scored 40 or more points on seven different occasions, including 73 points against West Valley in week nine.

Their sweetest victory was a see-saw battle in the semi-final game against the Santa Clarita Warriors in Oxnard which gave the Vikings a berth in Super Bowl XX.