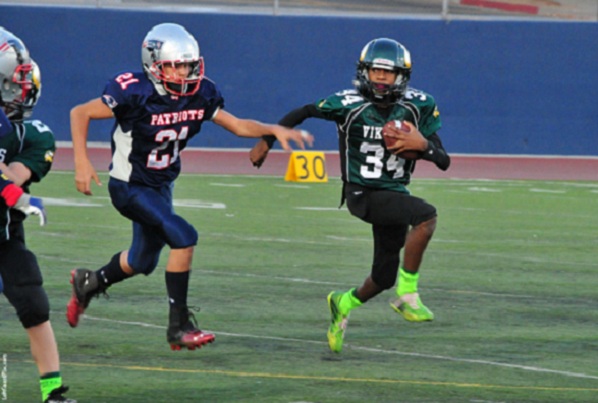 No one said the Pacific Youth Football League East Conference playoffs would be an easy trek as the Burbank Vikings Pee Wee Black found out on Saturday at Burbank High.

The Vikings’ 36-34 victory over the Palmdale Falcons was nip-and-tuck with the deciding points being a two-pointer that the Vikings converted, while the Falcons failed on a pair of two-pointers.

Now the Vikings (9-0) will host the Valley Bengals in a quarterfinal match this Saturday at the same site with a 2:45 p.m. kickoff.

With the contest knotted at 22-22, the No. 2 seeded Vikings powered ahead with two touchdowns in the third quarter.

The Vikings’ next tally was Russell’s burst after Palmdale’s fumble was recovered by defensive tackle Logan Rice.

Palmdale, the No. 7 seed, inched closer with two touchdowns in the fourth quarter, but was turned back twice on the two-point try.

The second two-pointer was foiled when middle linebacker A.J. Vargas blitzed while Diego Reynaldo tackled the ball-carrier behind the line of scrimmage.

Russell’s touchdown and two-point dash in the opening quarter saw the combatants enter the second quarter tied at 8-8, and the Vikings trailed at the intermission, 16-14, despite Russell tacking on his second touchdown.

Baklayan’s score on a long jaunt along with Russell’s two-pointer made it 22-16, however the Falcons tied it at 22-22.

Defensively the Vikings had open-field tackles from Cristian Elizalde, Ricky Garcia, Baklayan and Russell, while the middle of the field was patrolled by nose guard Reynaldo, defensive tackle Anthony Diaz and linebacker Vargas.

Meanwhile the Burbank Vikings Junior Green had a walk in the park after trouncing the Santa Clarita Warriors 58-0 in an opening-round playoff game.

The Vikings (9-0) were out of the starting block fast as they scored on the opening play and settled into a 30-0 lead after one quarter and led 38-0 at the intermission.

On the first play from scrimmage fullback Loyal Terry rambled 65 yards to make it 6-0, and quarterback Bryce Young’s two-point attempt handed the Vikings an 8-0 lead.

One play later the Vikings forged a 14-0 cushion on Young’s 36-yard streak pass to running back/wide receiver Dante Coxsom, while Terry’s two-point conversion made it 16-0.

On the fourth play Coxsom’s seven-yard bolt gave the Vikings a 22-0 edge, and the lead became 24-0 after tailback Sebastian Leal’s two-point attempt was successful.

Young added a 15-yard scramble that made it 30-0, while running back Maximus Mota contributed a 22-yard romp and a two-pointer for a 38-0 lead.

The second half kickoff was grabbed by wide receiver/defensive end Michael Sorokin who fielded the squib kick and raced into the end zone untouched for a 44-0 advantage.

It became 50-0 when Mota fumbled the football into the end zone which tight end Mike Lopez recovered. The Vikings’ margin became 52-0 after offensive/defensive lineman Malachi Meeks scored on the two-point try.

With the contest well in hand defensive lineman Diego Santillan was allowed to play quarterback and he found the end zone after a 13-yard run for the game’s final points.

The Vikings (4-5), who will next face the Highland Bulldogs, are still without the services of tailback Malik Jackson, who broke his wrist, but this didn’t slow down the Junior Black.

Quarterback Chase Tachau contributed 50 passing yards and 50 rushing yards along with a touchdown. Fullback Jake Barraza added 30 yards on the ground with a pair of scores, and wingback Diego Garcia churned out 60 yards.

Johnson also had a game-high 10 tackles with an interception, cornerback Julian Brady had a pick, and defensive end Kyler Michel finished with three tackles and a sack.