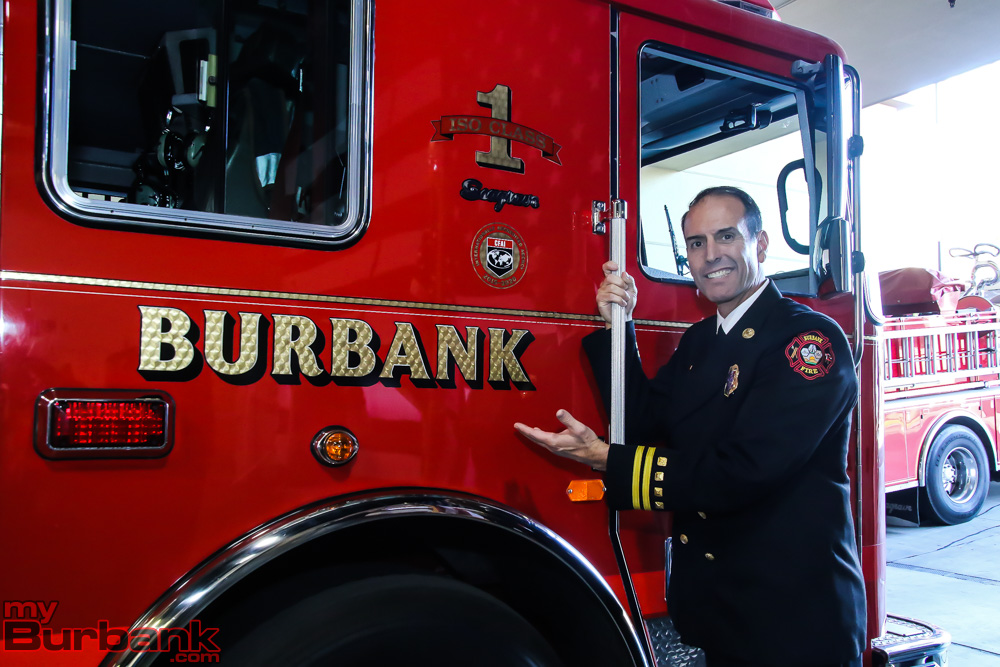 The ceremony, held at the Burbank Fire Department Station 11, was well-attended by area fire chiefs including those from the cities of Glendale, Pasadena, El Segundo, Alhambra, Culver City, Los Angeles, in addition to representatives from Los Angeles County Fire and the Hollywood Burbank Airport Fire Department.

Burbank Council Member Jesse Talamantes, a former Burbank firefighter and training officer himself, recalled then “rookie” Lenahan as a team player, and a natural leader.  Glendale Chief Greg Fish recalled Lenahan providing guidance and support throughout his tenure, and assurance for incoming Chief Garcia that “we’ve (Glendale FD) got your back!”

Lenahan actually began his career in the LA County Sheriff Department.  While at an event, according to retired Chief Jeffrey Howe, Lenahan was introduced to the fire department culture and brotherhood, and soon entered training for the Burbank Fire Department.  “Tom was one of those guys who was always able to take a negative and turn it into a positive” recalled Howe. “He had a big heart.”

Of his many accomplishments as Chief, Lenahan may have left a tough legacy to surpass – his leadership bringing the Burbank Fire department to accreditation from the Commission on Fire Accreditation International, earning one of the highest classifications possible – the Class 1 Public Protection Classification (PPC) rating, making Burbank one of the highest rated fire departments in the United States.

Lenahan received Certificates of Recognition for his service from a wide range of officials, including US Rep. Adam Schiff,  CA Sen. Anthony Portantino, and City of Burbank Mayor Will Rogers.
Chief Garcia brings a new era to Burbank.  Garcia will face many challenges, including shrinking budgets, but is “excited about the possibilities for further developing the Fire Department.” Garcia also emphasized that he is “eager to foster cooperation and integration with area fire departments, and ready to accept the challenges ahead.”

Garcia joined the Burbank Fire Department in 1994 and has served as a Battalion Fire Chief and Assistant Fire Chief.  Known as the “Coach,” Garcia has a strong reputation as a team builder and team leader.

According to the Burbank Fire Department, Chief Garcia holds duel Associate Degrees in Fire Science and Paramedic Studies, a Bachelor’s Degree in Organizational Leadership, and continues as a Master’s Degree Candidate at Brandman University. Garcia is married, with a daughter and two sons.

As newly appointed Assistant Chief Danny Alvarez brought the Change of Command to a close, a dispatcher from the Verdugo Fire Communications Center broadcast the message to member agencies announcing the formal change of command, with acknowledgment by each agency congratulating Chief Garcia into his new role as Chief, Burbank Fire Department.