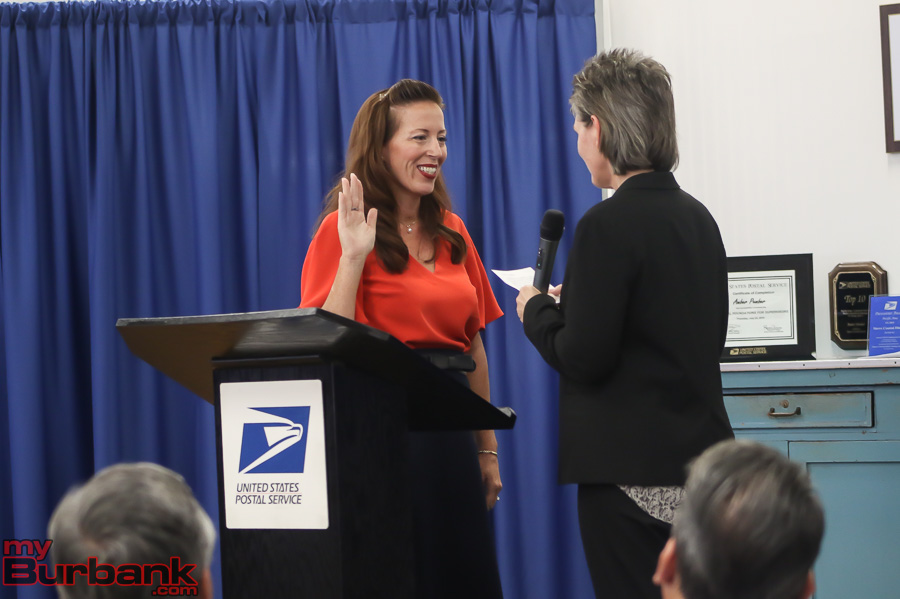 A large crowd of postal workers, officials and family gathered for the swearing in of Burbank’s new postmaster, Amber Pember, last month.

Pember was sworn in by the Manager of Post Office Operations, Jolene Fischer, and Mayor Emily Gabel-Luddy was on hand to present Pember with a city certificate.  The mayor was joined by City Councilmen Jess Talamantes and Bob Frutos.  Pember is a long time United States Postal Service worker and was previously the postmaster at Wasco city post office.

Pember started her postal career in 2006 as a part time-letter carrier, and within three years she was promoted to supervisor of customer service at the south station post office in Bakersfield.  By 2012 Pember was postmaster of the City of Wasco post office.

Pember’s stellar career has garnered recognition and awards for her work and leadership, including the Area Vice President’s Award for Outstanding Leadership and Top Performance.  Pember aspires to have the post office work with and be committed to the city.

“As the postmaster of this media city, my desire is to build a solid relationship of trust through community involvement and exceptional customer service,” Pember said.

During Pember’s acceptance speech, she mentioned that the first piece of Burbank mail was a letter from studio head Jack Warner.

The previous postmaster was Angelina Ines-Batugo, who retired.

Pember will manage all post office operations including 115 city routes delivering to 69,933 addresses and PO Boxes, and she will lead 199 employees.  The post office distributes an average of 219,243 pieces of mail daily.

Pember lives with her family in Oxnard.