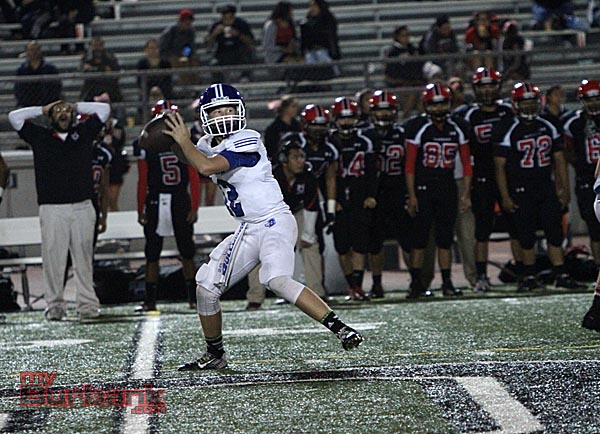 Burbank’s Guy Gibbs came off the bench to throw for three touchdowns (Photo by Ross A. Benson)

Twenty-seven miles west of Burbank among the Santa Monica Mountains rests the location where the popular television series “M*A*S*H” was filmed. At the rate of injuries that continue to mount for the Burbank High football team, Malibu State Creek Park might be the perfect spot for the Bulldogs to visit and regain their health and more importantly their mojo.

Playing with a depleted roster that featured nine sophomores seeing action, Burbank put forth a valiant effort in a 41-21 victory over Glendale Thursday evening that would have made Hawkeye, Father Mulcahy, Margaret Houlihan, and Maxwell Q. Klinger quite proud.

“They are just gritty,” Burbank coach Richard Broussard said of his team. “We had a great week of practice. We just beat on each other. I knew we would come out here and play a physical game. It’s something that we have been missing. Coming out and punching teams in the mouth.” 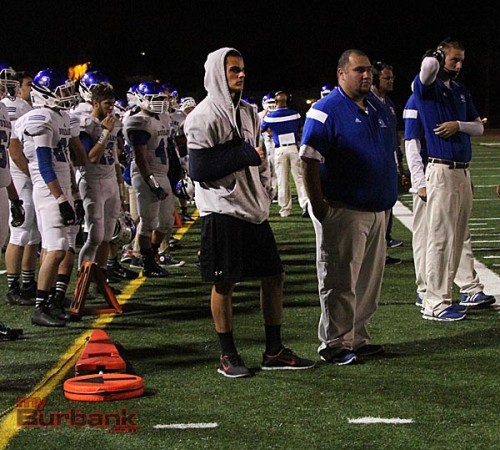 Add to the list starters Tony Toledo and Ryan Boyd who left Thursday’s game due to injuries and the Burbank sideline resembles a M*A*S*H unit of the walking wounded.

“I hate the word ‘injury,’” Broussard said after the game. “We were down nine starters at one point in the game. It’s a testament to our program how we run our system. We just plug in and play kids and they go in there and do their job.”

Gibbs came on in relief of Aki Arlington for the final drive of the second quarter and proceeded to go 3-for-3 for 36 yards and tossed a 2-yard touchdown pass to Dorian Housholder that gave BHS a 20-0 lead with 49 seconds left in the first half.

Gibbs, a 5-foot-7 sophomore, finished the evening 6-of-9 for 136 yards, one interception and three touchdowns including TD passes of 68 and 28 yards to Nick Cantong. 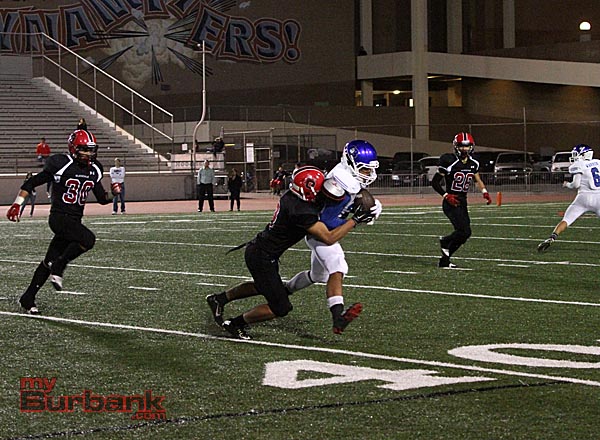 “It felt great. They were both wide open and I read it perfectly. I had just the right amount of time with the line blocking,” Gibbs said. “I want to thank the line though. They did a heck of a job today. I just went in and didn’t want to think. If I think too much then everything goes wrong.”

Gibbs did little wrong as he calmly and confidently led Burbank (4-3, 2-2) to a great win on the road.

Meredith is expected to return in the next couple of weeks but in the meantime Gibbs showed the ability to lead the team and showcase his future position. 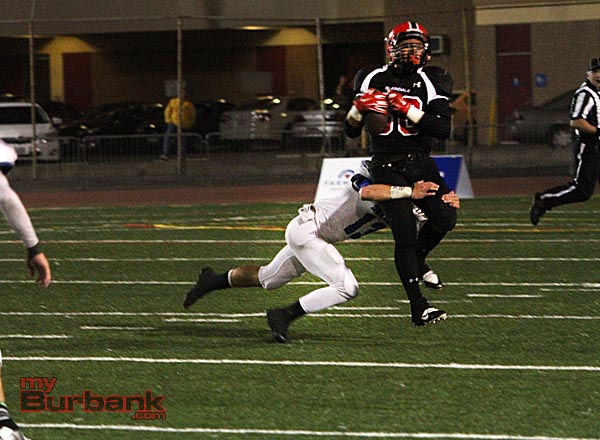 Burbank’s defense held Glendale in check for most of the game (Photo by Ross A. Benson)

After a scoreless first quarter, Burbank scored on an 18-yard touchdown run by Brandon Alba who rushed for a game-high 106 yards on 14 carries. On fourth-and-six, Alba took an inside reverse handoff and blasted his way to the outside and shrugged off a Nitro defender to hit paydirt.

Burbank increased its lead to 14-0 behind Housholder who scored from five yards out on a sweep just a play after he gained 23 yards on a nifty run through the heart of the Glendale defense.

Gibbs then replaced Arlington at quarterback and promptly drove the Bulldogs down for a touchdown just before the half.

The Bulldogs seemingly had the game in hand after scoring on the second play from scrimmage of the second half when Gibbs connected with a wide-open Cantong for a 68-yard strike and a 26-0 advantage. 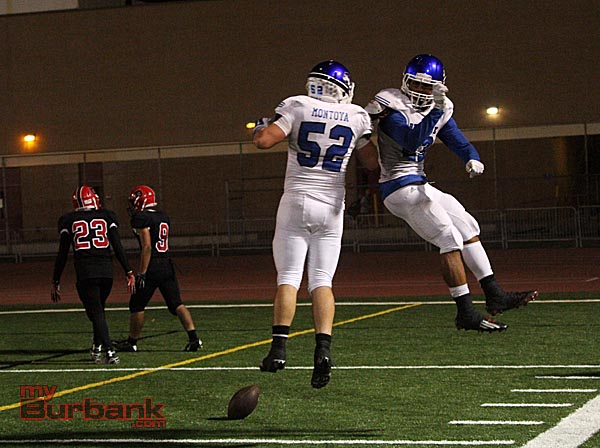 Nick Cantong (right) celebrates with Max Montoya after catching his second touchdown of the night (Photo by Ross A. Benson)

But Glendale roared back scoring 21 consecutive points before Burbank responded on a 28-yard touchdown pass from Gibbs to Cantong over the middle with 10:26 left in the game. Gibbs found Cantong in the corner of the end zone for the 2-point conversion and the lead swelled to 34-21.

The Bulldogs iced the game when sophomore Nick Warren scored from two yards out with 1:34 remaining.

Cantong finished with three catches for 100 yards and two touchdowns while Housholder caught three passes for 36 yards and a touchdown. Arlington ran for 53 yards on eight carries at quarterback.

Burbank returns home to Memorial Field next Friday at 7 p.m. against Hoover.

As for you M*A*S*H fans, only an ambulance and a rusted jeep used in the show remain today at the exact site of the film’s original set.