All Favorites Win in Rivalry Games But Games Have Plot Twists

One of the best things about sports is the drama of a rivalry because just about anything can happen. The motto “Any Given Sunday” has roots in this belief and historically Americans love the underdog because their country won its independence through a war where it defied all odds.

At first glance, Friday night lacked much suspense when Burbank and Burroughs clashed in all of its winter sports. Favorites won across the board in fashions that seemed mostly like formalities. A second glance, however, reveals plenty of plot twist and turns.

The best story of the night was the Burbank High girls’ basketball team finishing the first round of Pacific League play in first place after it held off rival Burroughs, 37-34, and the previously unbeaten Muir Mustangs were upended by Pasadena. The low point Friday came when a girls’ soccer match was prematurely halted due to a fight between both teams, Burroughs beating Burbank 2-1 in a match where few will remember the final score.

In other games, Jose Hernandez’s Bulldogs beat struggling Burroughs, 70-59, after a sluggish start and Mike Kodama’s squad controlled things late in a 3-1 Burroughs win against Burbank in the veteran coach’s first rivalry win in years after a two-year hiatus from coaching in which the coach also went into the school’s Hall of Fame.

So although there were no upsets when all was said and done, there was plenty of drama and side plots. Here is a rundown of the action for January 20.

Girls Basketball: Burbank had to rally to finish the first half of the league schedule in a first place tie. Burroughs seemed poised to fend off their rivals yet again when it led by six points with just over six minutes left against the Bulldogs.

However a run by Burbank, which was capped by a lay-up by Jaime Gonzalez with 1:46 left to put Burbank up 35-34, sparked the ‘Dogs. Teammate Damarie Gonzalez led all scorers with 10 points. Burroughs was led by Aysia Shellmire who scored nine points and had five blocks before fouling out midway through the final quarter.

It was with Shellmire on the bench where the Bulldogs were able to take control. She was one of three Burroughs players to foul out. Burroughs fell to 7-12 overall and to 2-5 in league with the loss, while Burbank improved to 12-8 and 6-1.

No one at BHS could recall the last time time Burbank found itself in first place this late in the season, but it was sometime when the team was still a member of the Foothill League which it last competed in during the 2006 season. That stay at the top was brief, the Bulldogs are hoping this one will last longer. They have a huge game against Pasadena on Monday, the same team which helped them move into a first place tie by upsetting Muir in the cross town rivalry game for those two teams. 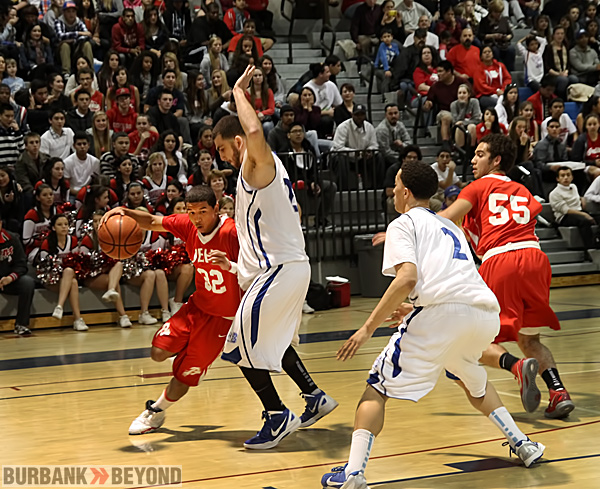 Boys’ Basketball: Remi Youssefi and Caine Brown Kennedy each poured in 20 points to lead Burbank to its third straight league win following a four-game skid to start Pacific League play. In the softer part of its schedule Burbank has found its stride and now seems to have some momentum heading into the second round of Pacific League play.

Burbank is now 11-9 overall and 3-4 in league. It had to relish the opportunity to knock Burroughs to 0-7 in league. The Tribe is in a tailspin and have dropped 10 straight after opening the season 7-3. Friday’s loss dropped them to 7-13 on the season overall.

Austyn Thompson scored a team-high 17 points for Burroughs, while teammate Ezekial Zuniga added 14 points as he continues getting back in basketball shape after being injured all preseason and much of the first round of league.

Girls’ Soccer: Burroughs scored two goals in a two minute span of the first half to claim a 2-1 win against Burbank on January 20. Maria Gomez and Brianna Matallana scored goals for Burroughs while Dana Williams notched a goal for the Bulldogs on a penalty kick. The game was halted in the back portion of the second half after benches cleared following a fight between Gomez and Burbank’s Maddie Carlborg.

Injuries, penalties and dirty play made the first half exciting, but these things also contributed to the intensity that sparked the fight and mared an otherwise splended evening of rivalry contests. No doubt there will be consequences that extend beyond the ejections and follow-up one game suspensions that are part of CIF Southern Section regulations. The two teams are scheduled to play again on February 9 at Burbank High.

Boys’ Soccer: In sharp contrast to their school’s girls’ team, the Indians saved their offense for the second half in rallying for a 3-1 win against Burbank. Completely dominated in the first half and held without a shot on goal, Burroughs put together three goals in the second half in the win.

Julio Guillermo tied the score at 1-1 with a goal moments into the second half and the Tribe exhaled. Francisco Baez broke the tie with a goal in the 74th minute to give Burroughs its first lead, and Baez capped the comeback with a second goal six minutes later and the Indians erupted in celebration.

It was Elliott Whitecotton who kept Burroughs in the contest with his goal keeping, delivering a season-high 12 saves and twarting a barrage of Burbank scoring chances in the first half. Only a goal by Tadeh Anbarchain off a corner kick from Jon Trujillo got past him on 12 first half shots on goal.

Burroughs is 5-7-2 overall but more importantly 4-2-1 in league and in third place. The loss dropped Burbank to sixth place and 2-3-2 in league play.