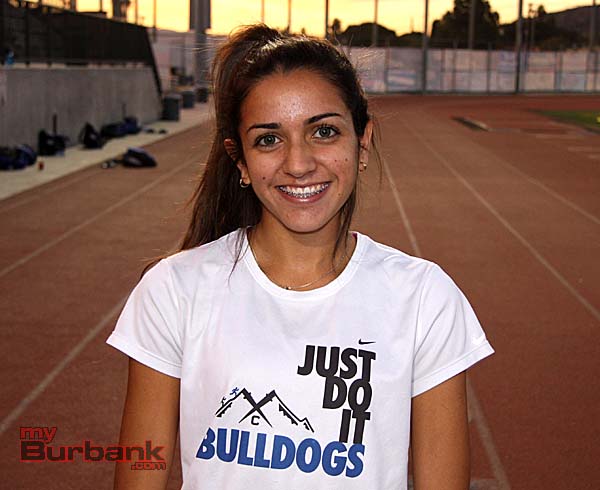 With cross country having come to an end this past weekend, we look back at one of the greatest seasons in Burbank High School history. If you missed the superlative efforts by Candela Fernandez, don’t worry. You are in luck. She’s only a junior with another year to cement herself as one of the State’s top long distance runners and possibly the area’s best of all-time.

As the weeks dwindled down towards the end of the cross country season, Fernandez had four goals in mind:

Fernandez, 16, capped off an amazing season accomplishing the first three goals and falling just short of the fourth.

First, she swept all three league meets in convincing fashion with times of 17:57 (Crescenta Valley Park), 16:37 (Arcadia County Park) and 17:57 (CV Park- League Finals). More importantly, Fernandez led the Lady Bulldogs to a league title, the first for Burbank since 1978.

In addition, Fernandez set a new school record at the Mt. San Antonio Invitational with a blistering time of 17:13. Consider this- her freshman year she ran a 19:59 at Mt. SAC followed by an 18:29 her sophomore year. Imagine what could happen a year from now.

Fernandez’s success continued at the CIF Southern Section Prelims where she coasted to a first place finish in her heat with a time of 17:33. The Bulldogs advanced as a team to the CIF Finals a week later for the first time since 1987.

At the CIF Southern Section finals, Fernandez placed 3rd overall in Division I with a time of 17:32 earning her a spot at the CIF State cross country championships in Fresno.

With the State’s elite runners coming together to compete for cross country’s ultimate prize, Fernandez had one final strong run and placed 4th individually in Division I with a time of 17:42 to earn All-State honors.

“It’s so awesome to compete against the best because they are ranked in the State and are amazing runners,” Fernandez said.

She finished 11th overall among all five divisions narrowly missing the required top-5 placement to advance to the Nationals. You can bet that will be her #1 goal in 2015.

Fernandez’s remarkable season ranks as one of the most decorated in Burbank history. It is safe to say that she has become Burbank’s greatest female runner surpassing McKenzie Paul in 2010. All of Paul’s records have been swept aside by the talented and humble Fernandez.

Her journey is a unique one in that she never ran long distance prior to coming to BHS. She came out freshman year, gave it a shot, and the rest is history.

“I started off like everyone else not knowing what the sport was and just having to get used to it,” she said. “I began to really fall in love with it and put in the hard work. That’s how I got better.”

By the spring of her sophomore year, Fernandez had made her mark in track with school-record times in the two mile (10:49.60) and mile (4:57.59) while competing at the CIF Track and Field Finals. She became the first female athlete ever at Burbank to break the five-minute barrier in the 1,600.

She credits her hard work ethic and training with the boys track and cross country teams to helping her improve and excel at a high level.

“I began running with the guys last track season during my sophomore year,” Fernandez said. “Having me there pushed them because they don’t want to get beat by a girl and me hanging off of them during speed workouts and long runs definitely pushed me.

“I’ve worked really hard to be where I am at. Sometimes it’s unbelievable when you take a step back and think about all you’ve done. At the same time, I can’t say it’s surprising because of all the work I’ve put in. You put in the work and you get the results.”

Coach Trevor Marca has done a superb job preparing Fernandez for the grind of a cross country season both physically and mentally. Even though he realizes he is witnessing something special, it hasn’t come as a total surprise to him.

“It’s been a lot of fun over the course of the last couple years,” Marca said. “It hasn’t been totally surprising because I felt she had the tools such as the work ethic, the mentality, the discipline to attack the sport the correct way and have the respect and knowledge of the sport to be able to succeed.

“We take it one season at a time and even one meet at a time. She has areas where she can still improve and areas where we will focus for the track season. My brain is already working in overdrive of getting her to the next step.”

And to think she is only 16 years old. We still have track in the spring and the entire 2015-16 school year to truly appreciate Fernandez’s run to greatness.