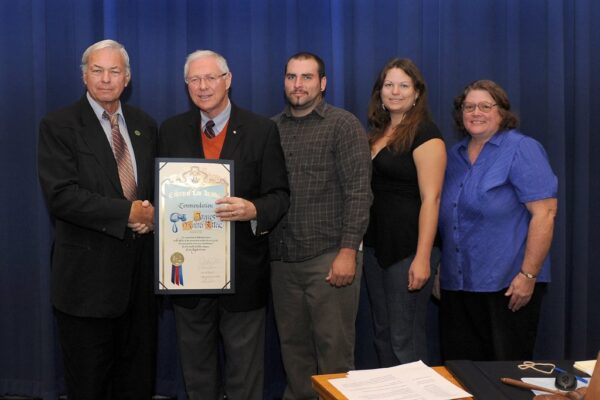 In a recent County Board of Supervisors Meeting, Supervisor Mike Antonovich honored James Etter, as he retired from the County Water Commission.

The two term Commissioner stepped down from his charge to be installed into a new Commission as orchestrated by Supervisor Mike Antonovich.   Etter, who once also served on The Burbank Police Commission, accepted his duties and a certificate of appreciation from the Board of Supervisors last November 21, at a special presentation ceremony.

Supervisor Antonovich stated that Etter was being honored not only for his service on the Water Commission, but also for his more than 10,000 hours of community service to the area youth.

Etter continues to be active in The Boy Scout Venture Crew Program, and many other groups which serve the young people of this community. Presently serving on the Board of Directors to the “Miss Country Western USA” Pageant and the Los Angeles County Fish and Game Commission, his focus will continue towards service to our youth.

James Etter is a native of Burbank, and a decorated Vietnam combat veteran.  He is a graduate of John Burro0ughs High
School,  He is active in the Burbank American Legion Post 150.  Events which involve our youth and veterans, are his favorite projects.