Dominguez High was bigger, stronger and faster. The Burbank football team did all it could Friday night, but fell to the visiting Dons 41-21 in a first round CIF Southern Section Southeast Division playoff contest at Glendale High’s Moyse Field.

“We’re a young team,” Burbank coach Richard Broussard said.  “The game plan was solid. There’s a lot of pressure. There’s a lot of beef up there (Dominguez offensive and defensive lines). They just lay on you. Our kids battled. I’m so proud of them. I’m proud of how hard they played and how they finished the game.” 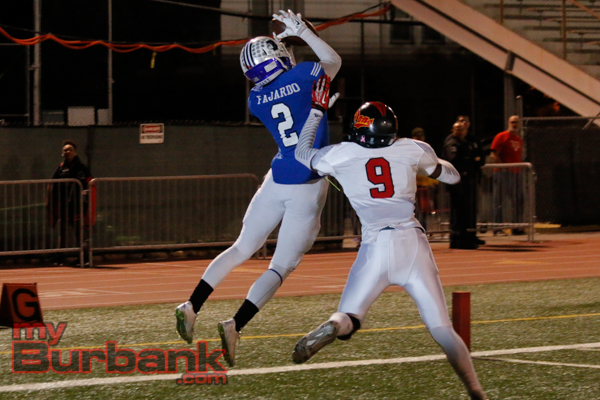 Dominguez (8-3) suited up just 24 players. But they were 24 of the best players Burbank has ever faced.

Senior running back Henry Williams rushed for 222 yards and four touchdowns on 18 carries to lead the Dons.

He put up the impressive numbers while playing on a sprained meniscus and a slightly torn medial collateral ligament in his left knee.

Williams got Dominguez on the board just seconds into the contest. 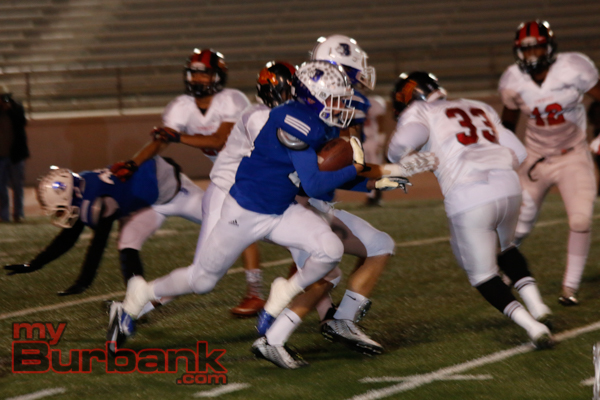 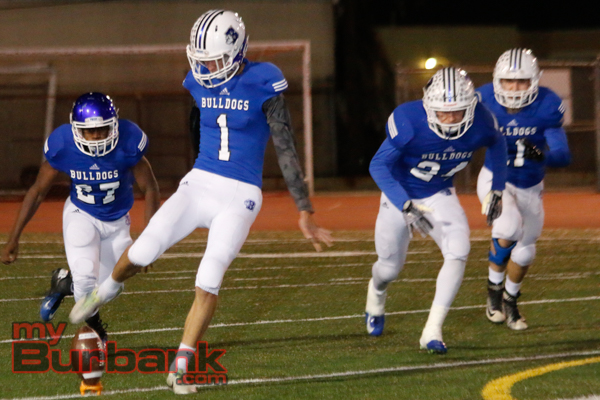 Senior Andrew Hank kicks off against the Dons in a CIF first-round setback. Photo By: Edward Tovmassian

Dominguez also got a stellar performance from freshman quarterback Sean Harlston, who carried the ball six times for 84 yards. He also had an interception on defense.

The visiting Dons went up 14-0 with 6:10 left in the first quarter as senior running back Royce Anson scored on a five-yard run.

Burbank got on the board with 1:01 left in the first quarter as junior quarterback Guy Gibbs hooked up with junior wide receiver Forest Fajardo on a 10-yard touchdown pass. 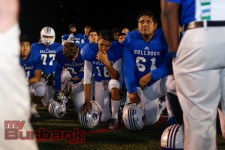 Burbank players look glum on the sideline after loss to the Dons. Photo By: Edward Tovmassian

The Bulldogs got within six points as Gibbs scored on a one-yard run 9:07 left in the first half to make it 20-14.

But every time Burbank did something well, Dominguez seemed to do it better.

Williams scored on a 50-yard run on the first play from scrimmage in the second half. Williams later added a five-yard touchdown run which made it 34-14.

After yet another Dominguez touchdown, Burbank fought back and scored with 6:28 left as junior running back Jake Kelley scored on a two-yard run.