Thoughts From the Bullpen

That my be the best word to describe what happened on Wednesday, November 30 at the Buena Vista Library’s meeting room when the City of Burbank held a meeting to get residents’ input on a Rancho District Master Plan.

The first woops of the evening was when City staff underestimated the crowd.  Probably expecting between 100 to 150 or so, there were over 300 people in the room, some forced to stand during the hour and forty-five minute meeting.  Staff had arranged a number of tables around the room that had different aspects of the Ranch neighborhood along with current uses on different properties.  No one ever got around to all the maps and aerial shots on different tables.

The second woops of the night came when staff misidentified why so many people attended.  After Councilwoman Emily Gabel-Luddy and Mayor Jess Talamantes briefly spoke to the residents, Assistant Community Development Director of Transportation and Planning Michael Forbes started from the top of the handed out agenda, wanting to talk about all aspects of the plan.  Mike Nolan then pointed out the 800 pound gorilla in the room and asked how many people were basically there for the development of the old G.M. Training Facility on Riverside Drive that had been sold to a developer.  300 hands in the room went up and suddenly the agenda had changed for the rest of the meeting. 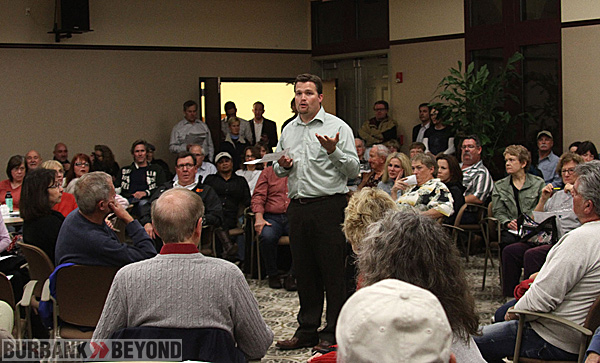 Rancho residence listen to Assistant Community Development Director of Transportation and Planning Michael Forbes during the community meeting. (Photo by Ross A. Benson)

Our third woops of the night came when it was acknowledged by both the Mayor and City Staff that the ball had been dropped after the Whole Foods debacle at the site of the former Martino’s Bakery.  While I think it was gracious for the City to take responsibility, where were any of these 300 people to either prod of remind the City that action still needed to be taken.  It’s kind of like a pitcher in baseball who just gives up a three run homer and thinks that the worst is now over – except the next batter at the plate is just as hungry as the last.

What might have been the largest and final woops of the night came with the admission that the Rancho Neighborhood Protection Plan that had been drafted years ago, put into a nice binder with pretty pictures and high dreams, has never been adopted by the City Council.  What has been adopted is a small document in it’s place that is only a couple of pages long and there really is no strong plan in the neighborhood, which is primarily made up of single family homes with many having stables in their backyards where they are able to keep their horses.  There was, however, “A Vision for the Future” that was drafted in 2008, and has just sat since then.

Now being a lifelong Burbank resident, although my house does not fall into the Rancho Neighborhood, I made some personal observations of the suddenly drummed up concern.  First, is this a NIMBY (Not In MY Back Yard) situation that when anyone wants to do anything in the Rancho, everyone is going to stand up and huff and puff, or is this a situation where the City of Burbank has dropped the ball and by not adopting a Master Plan, has left a neighborhood that thought they were protected, vulnerable?

In the 300 or so citizens who showed up, some were quite knowledgeable not only about City codes, but also about the original plan that was formed in 1992.  If people were really on top of this, why have they not pushed to have the Rancho Plan adopted?  And why suddenly did the City want to have a meeting about the Rancho area and putting a ‘new’ plan in place?  Is it that they saw this development coming and knew that there was going to be major problems when it came to light?

For his part, Forbes was in the heart of the Lions den on Wednesday night and except for one comment, came out in a positive light.  His only scratch occurred when asked what the developer, New Urban West, had in mind and he replied that they were not sure what they wanted to do with the property yet.  All one has to do is go to their website and click on the “What We Do” tab to find that they build housing communities, small of large.

Besides that, Forbes was extremely accommodating to people who sometimes asked unanswerable questions of ‘what if’ to people who wanted to start petitions to the City Council on the spot.  He was able to keep the crowd engaged and try to answer all questions and scenarios that he could.

One major problem that people have to understand is that the City Staff has their hands tied in many ways.  To start with, there is a procedure in place for anyone who wants to build anything to have that chance to do it s long as they stay within the Burbank Municipal Code (BMC).  There are many steps to go through including design, Environmental Impact, and the Planning Board before anything really takes shape, which might take years.  No City Staff member can say yes or no to anything as long as the procedure is followed.  It is only the five members of the City Council that can ultimately say yes or no to a project.

Both Councilwoman Gabel-Luddy and Mayor Talamantes were on hand to listen, and except for one angry gentleman, listened to many homeowners. Ted Milner, who lives on S. Mariposa near Riverside Dr. where the GM property is directly behind his house, addressed the meeting, said, “Our goal here today is: They don’t build on the (GM) property.”  Longtime Rancho resident Bill Smith  urged the crowd to let City Council members know how they feel about the issue.  “Respectfully talk to council members and let them know your ideas about the Rancho.”  Linda Barnes, a local realtor who specializes in the Rancho area, was impressed by the turnout at the meeting,  “This turn out will have an impact on our City Council”.

Yes, it will absolutely get back to the council but there may also be some hostility when it comes to other Burbankers when suddenly the Rancho people start demanding something.  It was just a couple of years ago that they chased Whole Foods out after they wanted to locate in the old Martino’s Bakery building.  While located on a busy street (Alameda) and away from homes, the NIMBY attitude was evident.  Not only did the citizens of Burbank lose a market with a healthy lifestyle, but the City also lost a source of tax revenue.

And yes, while the Rancho area may like their Mayberry lifestyle and appearance, they also have to remember they like their police and fire service 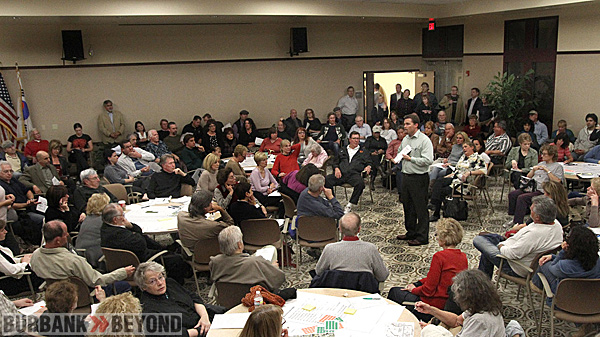 Rancho residents gather at Buena Vista Library for a community meeting about development in their neighborhood. (Photo by Ross A. Benson)

, their trash pickup and their streets swept every week.  That is where tax revenue comes into place.  Should residents of only a couple areas be saddled with all the businesses so others can pretend they don’t exist until they need something?  No one has asked the Empire Center to be build anywhere near there, but there are some businesses that may be a good fit for all of Burbank.

Do you think the Pickwick Bowling Alley and Skating Rink are going to be there forever?  Hope you did not feel that way about the Pickwick Drive-In.  Someone comes in with the right size wallet and could buy that in a heartbeat, and maybe the old store that is now offices at Alameda and Main.  Don’t look now but both of those are becoming run down with age and add all the open, empty business area next door to the Auto Club, and you can see that whole area might be in for development.

So yes, battle lines are beginning to be drawn and this long fight will begin and probably not end until after it has landed in the courts.

To the City Council, you need to get ahead of this and find out what it is this developer wants and if it is practical not only for Burbank, but for this neighborhood.  If they want the 27 units they have planned, then maybe it’s time to establish an Interim Development Control Ordinance (IDCO) as Nolan suggested, take a step back, and get this thing right in the next two years.

And to the Rancho residents, you need to work in the system.  Go to the City Council and ask for a subcommittee that will put a Rancho Plan in place, not just a few pages.  Don’t wait until something else happens, meet weekly if you have to, but get something ironed out on paper.  Threatening the Council with recalls, etc. is not going to work and is actually going to be counterproductive to what you want to accomplish in the long run.  Let’s face it, they are not going to put a horse park in that property for you to enjoy, so figure out what you want and while your at it, think about the rest of us here in Burbank that also support you.

No matter what, I feel a donnybrook coming on the horizon.