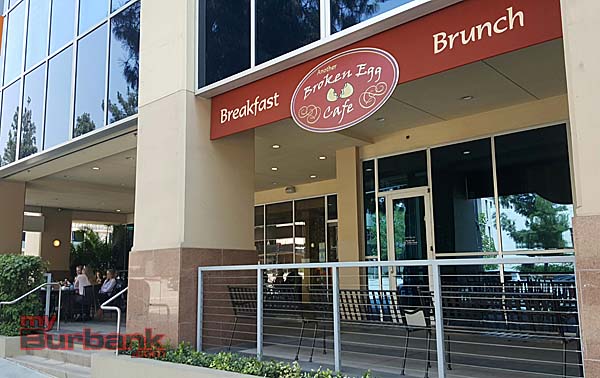 It seems there are a lot of restaurants in Burbank that cater to the breakfast and lunch crowd, then they disappear for the evening hours. Most of these seem to really punch their breakfasts menus with great portion and ingredients.

What most of these hybrid type of restaurants also have is burgers, with many trying to serve up a good burger per their own expectations.

Another Broken Egg Cafe is another of these places. Opening early at 7 am for breakfast, they are shuttered up by 2 pm everyday.  What that means is that employees (especially servers) are done at 2 pm and they need to get all of their ‘side’ work done before they go.  If you are there after 1 pm, are you really getting the best service.

These questions I bring up because we were there right around 1:00. Once we sat down, it took about 10 minutes for our server to get to us. He was really a nice guy with a good attitude, just seemed real busy and at the time there were only about three other tables filled in the entire place.

Once we ordered, I went with the Classic Bacon Burger, which consisted of cheddar cheese, baked bacon, lettuce, tomato & red onions, served on artisan bread. This was the closest they had to a regular burger. They did ask how I wanted the patty cooked, which is always a good sign for a freshly made patty.

It took over 25 minutes for us to get our food once it was ordered. Twice our server came and said they were sorry for the delay. The chefs must have been doing their own cleanup work as closing time approached was my first thought.

The burger looked good once it came but did not look special, as least not as special as the egg dish my friend ordered.  The burger was assembled and ready to go.

The bun was slightly toasted and as I went to pick up the burger, I could already tell there was a warning sign with the bottom bun as it was already getting soggy before I even had a chance to start with it. Both the top and bottom buns were soft and fresh.

While I ate, I gave extra attention to the bottom bun as it started to become a sponge, then it started to leak a bit. I could live with it to a point.

Some things that did stop my enjoyment was the lettuce that seemed to not be crisp, but wilted. On the other hand, the tomato on the burger was very ripe and somewhat hard.

After biting into the burger, the juice started to pour out. This is usually a good sign on a burger but in this case it was more because it just did not seemed cooked on the inside.  While I do ask for medium rare, there should be some pink to the inside and the juices ready to explode. This burger seemed somewhat raw in the middle as though it was on the fire for about two minutes total, instead of the usual five to seven minutes total. The bacon seemed okay, but was a little thick and hard to bite off at times.

The patty was seasoned, but I had to stop after about every four bites to grab my drink.  In my humble opinion, a really good burger should melt in your mouth and you should never reach for your drink but once the entire time you are devouring your masterpiece.

This burger just did not work for me and this is the first time I have given a burger with a fresh patty a lower grade. I have seen the tweets and emails from people saying that I am inconsistent in my ratings.

I get it. We all have our opinions and that is what makes this so much fun.  Sometimes I try and reward effort because places are trying hard or sometimes, while it may not measure up patty wise, the entire burger just has a good taste. It’s my opinion and that’s it. Just trying to give people an idea of what’s out there.

Some comments that I have gotten have been to thank me for pointing out a place they had not thought about and some are angry and try and defend their local place. I get it.

Side Notes: The fries that I ordered well done were not. I had no idea what happened in the 25 minutes it took to get our food to us. The pickle on the plate was soft and felt like it had been sitting out all day. There were no appetizers because they have none for lunch on their menu. There were breakfast apps. but nothing for lunch. Guess we know how much they really think of their lunch menu as a whole.

Another Broken Egg Cafe receives: Could Use a Rewrite

myBurbank Ratings:
Tops In Town (Outstanding)
On The Marquee (Above Average)
Could Use A Rewrite (Average or Slightly Below)
Don’t Quit Your Day Job (Poor)