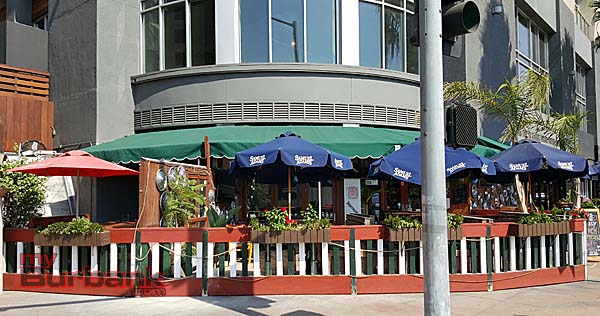 We try to have a policy of not doing chains over five locations but we bent that rule back a little this week for Barney’s Beanery, which actually has six locations. There are a lot of people who go to Barney’s and some weekend nights when I watch the myBurbankNews Twitter feed I see that there are also many who are fighting mad over the place.

So off we went.

Our first pleasant surprise was that we were able to park directly in front of the place. There is a 90 minute zone that holds two cars and it was empty – gotta love it!

When we entered we were able to pick about any table we wanted. The nice thing about Barney’s is that there is also a TV at every table so you can also watch some breaking news or maybe that soap opera that you just had to see.

They have a very large menu in newspaper form and also a side list of weekday specials and the Barney’s Burger and Fries – Two beef patties, pickle, caramelized onions, cheese, lettuce, tomato, mustard, and Barney’s sauce on a toasted buttermilk bun – fit right in for $7.50, which was $2 below the regular price.

When the burger came, it was wrapped with one end showing.  That end had cheddar cheese flowing out and I noticed that the patties were on top with the condiments below the meat, meaning that I knew that the burger would not fall apart easily. More cooks and restaurants should take note because no matter how good your bun is, if it is making contact with the meat it will get soggy – and fast!

Yes, the burger did have two patties, which in their entirety were not as fat (or juicy) as one good handmade patty, which could have been cooked to order. The bun was large and actually gave too much of a bread taste and while the condiments were extremely fresh and cut liberally, you had a hard time even tasting the meat although there were two patties.

The sauce they put on is a little tangy but works. No doubt the cheddar cheese was also great. I just don’t understand why they would not come up with a great, fresh patty instead of using patties about the size you would find in a McDonald’s cheeseburger.

Side Notes: The side of fries that came with the burger were really good and cooked well done to a golden brown.  We also tried the Mac and Cheese Wedges that were fried batter around compressed mac and cheese. They were okay, but not enough mac and cheese inside, you tasted the batter more than the filling. We also tried the fried pickles which seem to be making it onto a lot of menus lately. Unlike the mac and cheese, these were larger pickles slices that you could taste the juice inside with the pickle.  These might be the best ones I have had to date.

Barney’s Beanery receives: Could Use a Rewrite