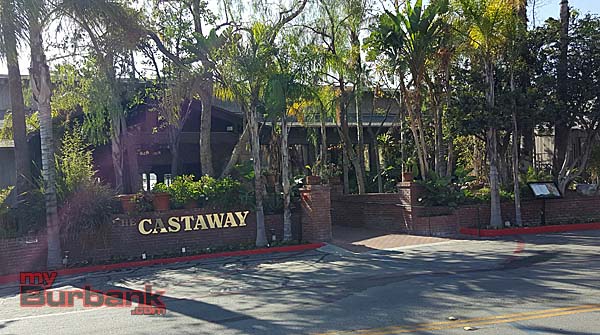 Carl’s Jr. at one time advertised their big burger as the $6 Cheeseburger (which I now think is around $7.50!?) and although they charged about $4.59, they want you to think you are getting a better value. Now if you go to the Castaway Restaurant on top of the hill in Burbank and order their $18 Cheeseburger, you are paying $18 but what the heck, you get a great view of the Valley.

Yes, $18 for a cheeseburger. Thank goodness my editor just pays back my receipts without question. Hopefully he does not also buy any of those $300 toilet seats the government usually buys.

When we went in the The Castaway Restaurant, we were surprised how uncrowded it was at 12:30 in the afternoon. Oh wait, did I mention they serve $18 cheeseburgers. I’m sure people have to weight the decision to pay the monthly rent or get a cheeseburger from The Castaway.

So myself and our guests (their names were not revealed to protect the innocent) sat down and of course I ordered the Castaway Cheeseburger, which consists of lettuce, caramelized onions, aged cheddar, 1000 Island. When they asked, I ordered it medium rare. Now since I was paying $18 for this golden cheeseburger, I thought I would also add avocado for an extra $2 to make it an even $20. Believe it or not, Dodger Stadium does not even charge $20 for a cheeseburger.

Once the burger came I have to admit that it looked great. They used a white cheddar on the burger that looked very inviting and oozed all over the hand made patty. There was avocado there also but it seemed that they used it sparingly and it actually provided little extra taste.

The caramelized onions were plentiful and I have to admit that I personally like the raw onions a little better. These onions were nice, they just don’t have that much of a unique taste, or a sharper onion taste. The thousand island dressing was not very noticeable either.

Once I picked it up, I noticed the bun was nice and fresh but I was worried with the patty sitting directly on the bun that it might give out.  Instead, another issued occurred.

Once I took my first bite, I could feel the entire burger shift in the bun with the patty and onions started to slide around and wanted to just completely leave the bottom bun.  I now had to try and slide things back into place. Each bite I took after that seemed to have the same effect and after a while I was worrying more about holding onto the bun than trying to enjoy the burger.  It was a slippery slope and a messy one at that.

So with that one problem being handled (or should I say man-handled) came to flavor. I thought that the patty was fresh and it was cooked perfectly, it was all of the condiments that really seemed not to deliver much. There were no lettuce and pickles which could have helped but that is their decision as a restaurant so I have to respect that. It just was as good as the cheese and patty were, that is what the rest of the burger was lacking. For $18, they should include an entire produce department.

At least the view was good.

Side Notes: As always, I ordered the fries well done and they were not. It was nice that for $18 they included french fries, at least all about 20 or so of them – really skimpy. We also tried both the crispy calamari and the spinach and artichoke dip which were also both very good but were also a little pricey at $14 and $11. I thought the dip was actually a better value and really did enjoy the taste.  Our servers were also very efficient and quick.

The Castaway receives: On the Marqee