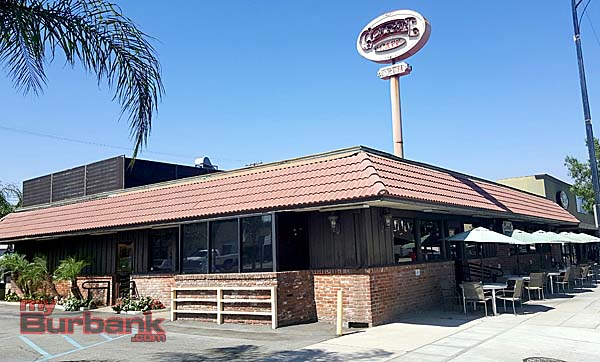 Okay, so if you have lived in Burbank for any length of time and been hungry after midnight you know about Coral Cafe.

Coral is a family restaurant that is one of the more popular places in Burbank. But yes, they do have a burger on their menu, so they are also fair game for the Burger Dude.

Yes, I just talked about myself in the third person. I am sure someone will now post a comment about that. (Be ready, Editor!)

Their menu is like a small book, there is page after page in that menu with about any food item you could name. There is a page entitled ‘Juicy Burgers’, and on the bottom of that page is the Kobe Cheeseburger Deluxe which is described as eight ounces and comes with fries for $10.50.

Out of the 27 burgers on the menu, this sounded like the winner. I ordered it with cheddar cheese and avocado.

When the burger came it looked like a winner, but as you know loyal readers, looks can often be deceiving.

There were some strange going-ons here. To start with, the top bun seemed to be toasted on top and not on the side facing the patty. The bottom bun looked to have a very slight toast to it and the patty was sitting directly on the bun. The patty looked to be hand made and the cheddar cheese was not sliced, but shredded and it seemed to be a good amount.

On the side came the avocado, along with all the condiments such as tomato,pickles and lettuce.  The top bun was completely dry but there was both ketchup and mustard on the table.

The first bite into the burger was the real disappointment.  The burger was cooked medium-well and although the menu says ‘Juicy Burgers’, this one was anything but.  Not only did it taste dry, but it just seemed to have no seasoning at all.  It was very bland tasting and at one point, just hard to digest.

By the time I was half way done, the bun began to take its toll.  Whatever small amount of juice was in the burger was now being absorbed by the bottom bun and you know what that means?

Yes, the self destructing bun.

I finished the burger and while it should have been so much better and the parts were all there for that, it just did not cut it.  Thank God I got free refills on my drink.

Side Notes: The well done fries were incredible and cooked just right. Also tried their corn chowder soup and it was also very good.  I have been at Coral Cafe before and many menu items are good. The servers are usually very friendly and the bus boys are always around to keep your drink refilled.

Coral Cafe receives: Could Use a Rewrite