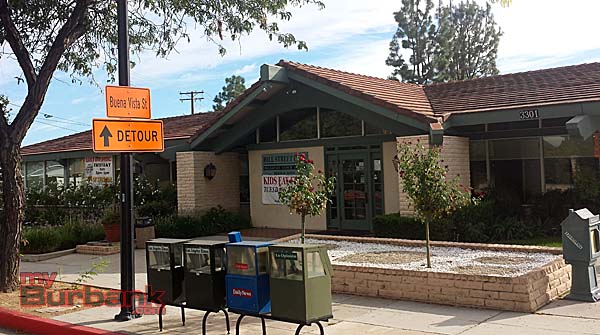 Hill Street Cafe has been around for a while. Located at the old Bob’s Big Boy location on Glenoaks near the Burbank / Sun Valley border, it does a dynamite breakfast that has people waiting.

Hill Stret makes a lot of their food from their own recipes. The Soups are incredible and the cole slaw may be the best in the city, which I had to get with my burger!

Oh yes, the burger. Hill Street Cafe has ‘The Classic’, that when ordered with cheddar cheese runs $9.70, plus you get a side (did I mention the cole slaw!)

When the burger first arrives it really does look like a work of art. You can see the cheese as well as the hand formed patty which I ordered medium rare. The bun looks large (high) but easily compacts down when you pick it up to eat.

Both buns were toasted with the lettuce, tomato and pickles all on the bottom of the patty as well as the thousand island dressing. The top only had bun and cheese above the patty.

While he burger looks as good as anything you will ever be served on the outside, it is lacking a little on the inside.  The meat was cooked more medium the medium rare so it lacked a little of the juice I love. If you like your burger medium or medium well you may like this better then I did. It did not seem that the meat had much flavor either. I really felt it could use some (or more) seasoning.

While it did have all the condiments on the bottom side, you were barely able to taste the thousand island dressing which is too bad because they make their own dressing there and it could have really used the flavor.

After about five bites, the bottom of the bun started to self destruct into pieces. I do not know if it was from the juice of the condiments or what. It was more in pieces instead of soggy.  I was able to finish it before it completely fell apart but I felt rushed to eat it for that reason.

This is actually a very good burger and I would have it again. The bun and the flavor is important and I think that this can be an easy fix if they are interested. I would recommend it to you for a try to make your own opinion.