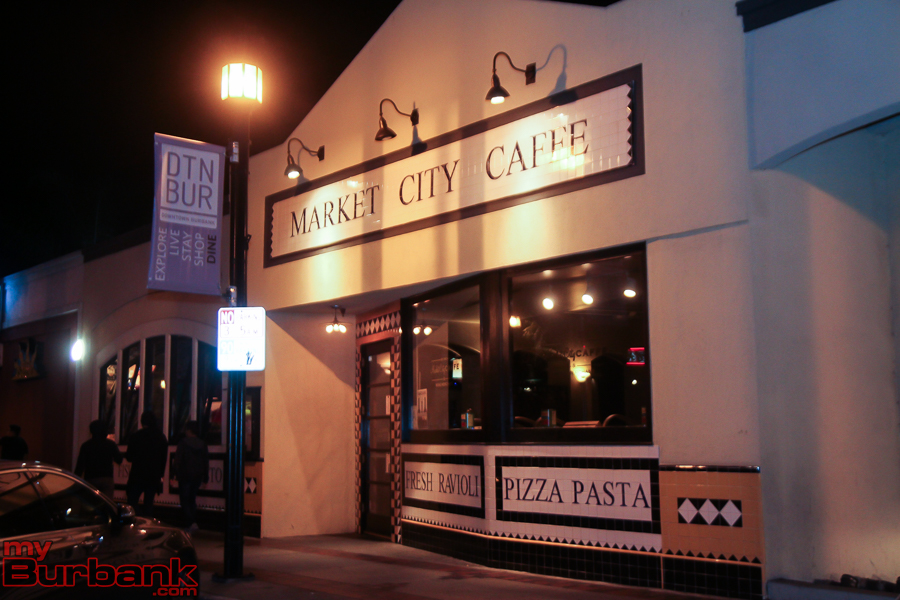 I have been to Market City Caffe a number of times, each time having one of their pasta dishes.  They make a great homemade pasta that melts in your mouth.

They also have a nice outside seating area that puts you right in the atmosphere of Downtown Burbank and the Palm Court.

As you can tell, I am trying to write about everything else I can think of that is positive and stay away from the burger. But that’s what we are here for, the burger.

On the menu they have two burgers. One is a Blue Burger and the other is just called Cheeseburger. Looks like they have as much love for burgers on their menu as a Mexican restaurant.

The cheeseburger is described as “Angus beef, onion marmalade, lettuce, tomato, mozzarella cheese, brioche bun”. Okay, sounds good but you know what I asked the server as soon as he asked how I would like it cooked? Cheddar cheese please! To which he answered that not only do they not have cheddar cheese, but also do not have American Cheese!

No American Cheese in an American restaurant? How Communist!

Now as long as I can remember, I always put my mozzarella cheese on my pizza and my cheddar cheese on the burger – something was screwy here. If they had cheddar cheese I wounder if they would put that on one of their pizzas.

Once the burger came it looked good with a hand-crafted patty. There was no spread on the bun that was actually more than just toasted, it was burnt on some of the edges making the bun somewhat hard. After taking my first bite I immediately discovered that I did not like the onion marmalade. It just did not work.

The meat was actually cooked medium rare and tasted fine by itself. The mozzarella cheese, well that was a different matter. Between the mozzarella cheese and the onion marmalade it just did not taste right. Without any other condiments supplied, there was not much to taste. It just became very bland.

What’s a shame is that the burger here has been an afterthought much like other restaurants that do not specialize in burgers. They have a great Angus patty that is cooked and seasoned well but everything else does not work at all. It’s like putting a Ferrari engine inside a Volkswagen and expecting a positive result. Like I always say, do it right or don’t do it at all. Market City Caffe is an outstanding restaurant in Downtown Burbank but they get a complete fail when it comes to heir burgers.

Side Notes: As always, I ordered the fries well done and they did not come that way.  They were shoestring fries that had some crispness on some while others were like squirming worms.  They were freshly made but in the end I could not finish them because there were just too many.  Tried the cole slaw also and it was extremely carrot heavy and not real creamy.  It was a good portion and I ate it all, but just was not a big fan.  It was fresh. just not the way I like it which is fine. Can’t always have my way.

Market City Caffe receives: Could Use a Rewrite