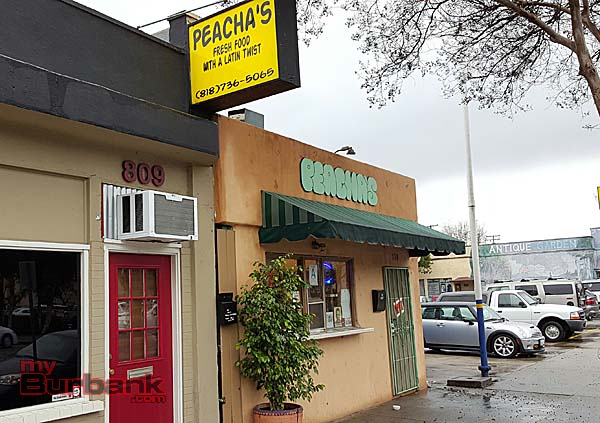 That’s the first thing on my mind as I sat down in the office to write this review. I’ll tell you why in a second.

To start with, Peacha’s may be one of the most unusual, unique places in Burbank to eat. I had driven by the location many times but from the outside there was not the allure to stop and go in. One of the advantages to writing this review every week is that now I had a reason to stop in.  What I found is the real reason for this entire series, to find one of THOSE places that you just would not know about until you were told of stumbled upon it.

While it is somewhat small inside, it is still large enough to seat about 10 parties. What is unique about the inside is the great rock and rolled theme throughout, including some great music from the 70’s and 80’s.  If you are a rock fan from that era, you will really enjoy the atmosphere.

Their motto is “Rock n’ Tacos” and their menu not only has many burgers, but another half is Mexican food that looked good as it was being served to other customers.

But were here for the burger. so here it goes.

Staying in their theme, they have some great names for their burgers including The Motley Crue, Slayer, Queen, Misfits and the Ozzy. Their Angus Young Jr. is their standard burger while they have a turkey burger named the Steven Tyler and the Hollywood which is a garden burger.

I went for the Angus Young Jr. but had avocado added. Their menu says all burgers are made with Angus Beef and I had mine cooked medium rare and of course, cheddar cheese. It only took about 10 minutes for the server to return with the food.

Once she put it down, I was both excited and disappointed, two emotions racing at the same time. Disappointment won out and all I could think to myself was, ‘Damn it”. The disappointment came from the bun. As I looked at this great looking hand packed burger with cheese spilling out, the bun looked small and cheap. Think of a Ferrari with a Volkswagen engine (the one that they lied about) and that is what my burger looked like.

I thought the tomato was cut a little thick for the burger, but it was fresh. It also comes with mayonnaise for the dressing while I prefer thousand island, but it was still a great taste. It also has shredded lettuce, red onion and mustard. A couple of bites in, I was really into the burger, the taste was outstanding and then once again, the ugly bun issues once again raises its ugly head.

Not only is the bun way to small, but it started to self-destruct. If there is something I really hate, it is the bun that gives surrenders. This was now becoming a mess to eat, although it was still a great tasting mess.

When I was done I really wanted more, it was really that good.

There is no doubt in my mind that this burger should have been rated Tops in Town but I just can’t give it that rating with such a bad bun, hence the On the Marquee rating. If the owner ever changes the buns and writes in, I will be glad to go back and re-review it. I love the place, the atmosphere, the people and the theme, but to the bun I say. “Damn it”. After all, it’s all about the burgers.

Side Notes: Ordered the fries well done and that was the way they came, tasted great but could use a little seasoning salt to really bring the taste. When you sit down, they bring you some awesome real tortilla chips and salsa. All drinks are bottled or can with no fountain drinks available. Even though their hours are limited, they have a full menu of items.

Peacha’s receives: On the Marqee