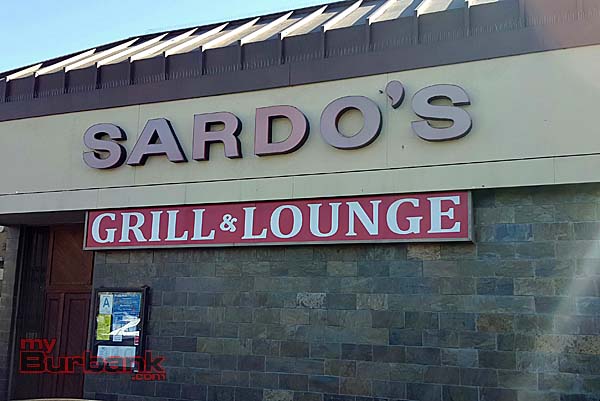 I usually always go for the signature burger when doing a review but Sardo’s Special Burger has one ingredient that I can’t handle, Ortega Peppers. I know, I’m weak.

Instead, I went for the Deluxe Burger with cheese that goes for $7.25 and includes french fries, which is a good deal – although it really can’t be called a good deal until going through a taste test.

The inside of Sardo’s is welcoming and there are numerous televisions around for sports viewing. There is a full bar and it was not too crowded at lunch time (1 pm).

When ordering the burger I was asked how I would like it cooked which is always a great sign of things to come and of course I asked for medium rare. But when I asked for cheddar cheese I was told I had a choice between American and Swiss – not good. Really? No cheddar?

The burger is served with the patty on one bun and the condiments on the top bun. While the patty is not hand packed, it appears to be machine pressed either at the restaurant or bought fresh. It is nice and thick and after the first bite was cooked medium rare which was full of juice.  Still, my one big problem is with the cheese, besides the fact it was American, it looked like a thin piece that did not cover the patty. I really like to see that cheese covering the patty and oozing on the sides.

While the bun is toasted and good size, by putting the large patty directly on the bun without any dressing, it causes the bun to start soggy right from the start when you pick it up. By the time you are half done you feel the bottom bun starting to give up the ghost.

While the top bun and condiments are nice with lettuce, tomato, onion and pickles, the amount of thousand island dressing used in downright pathetic. It seems as though it has been rationed or they used a tea spoon to spread it on.  There is not enough there for any flavor and you are forced to either ask for more or use the provided ketchup and mustard bottles.

Overall, the taste is fine and there are parts of the burger that work.  I did not taste much seasoning on the patty, but it was fresh. The condiments were fresh and the bun was the right side.  It is there as far as the beginnings of a good burger but it is not just quite there because in all honesty I just did not fell the love behind it.

Side Notes: The fries were ordered well done and came somewhat that way but it felt the grease was old. I will give the fries a passing grade but they could have been better. While they seem to offer an OK lunch and dinner menu, you get the feeling that this place is more about the bar and karaoke they have every night and the food is something that they just serve.