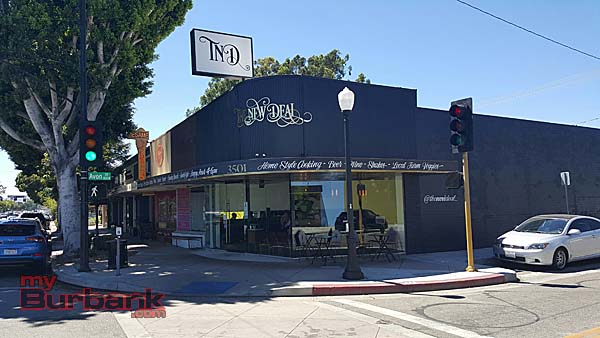 A reader sent us in a Tweet a while back telling us about this new place on Magnolia Blvd. in Magnolia Park. (Yes, my editor sends me all the tweets and emails that you send in) The problem was that when we went by there, it was closed.  Well closed no longer is The New Deal and let me tell you, this is a bid deal.

Magnolia Park has many little quaint shops but really has little in the way of places to eat, unless you want to stand in line at Porto’s. Urban Eats used to be located here but the menu just did not fit in with some.

The New Deal is not real large inside and only seats between 20 and 30 people, but has a relax atmosphere and has a great view of the outside with huge windows all around the corner. Great place to go to people watch.

I ordered the Roosevelt Burger which is described as a burger with sharp cheddar, avocado, butter lettuce and Russian tarragon sauce. The patties are advertised as free range and grass fed.  I was glad when asked how I wanted the burger cooked.

When the burger came it look and smelled good. I know in the picture the lettuce looked overpowering but it was not.  I was surprised that there was bacon on the burger because I did not order it added and it was not in the burger description.  With that said, I was glad to have it and was nice, thick and freshly made as well as plentiful.

The burger came already assembled so I took a quick look inside. The Russian tarragon sauce was on the top bun, with both buns being toasted, but was not spread liberally or covering the entire bun. I was also worried that the patty was resting on the lower bun, which was incredibly fresh and soft.

Taking my first bite, the burger melted in my mouth. The patty had a great taste and the bacon also gave it incredible flavor.  I usually don’t order bacon on burgers because it is not usually made fresh and has an old taste. It really took a couple of bites before I even got more taste from the Russian tarragon sauce but once it kicked in, it was a great added flavor.

I was worried about the bottom bun falling apart but thank goodness it did not. (I hate killing burgers on reviews because of bottom buns) The flavor lasted all the way until the end. I hated to have actually finished it!

My only very small criticisms would be to put a condiment (maybe the lettuce?) between the patty and bottom bun to give the bottom bun more support and maybe increase the amount of cheddar cheese. There was times the cheese started to fade out after being overwhelmed by other flavors. Overall, this was a $12 burger and I thought was worth the price which I believe was fair and would not have trouble with paying it again.

Bottom line is that The New Deal is going to be a big deal in Magnolia Park. It is family run with the owners on site working.  They have some big plans ahead for the place which will only get batter with time.

Side Notes: I Had some really great side dishes, The tomato soup is as good as you can find anywhere. It is thick, creamy and smooth. You also have to try the Fried Pickles, they are not like anything I have tried before There really a great appetizer. We also tried the House made Chips which were good but nothing special.  While I ordered and received the fries well done, they just did not work for me. It’s just a personal preference, but sometimes the fresh cut fries just don’t work well done.  Not the fault of the New Deal or the cook, just my preference. The burger came before we were done with appetizers and the chips never made it until after we had started eating the burgers.  I just chalk up to fact that as any new place, they just don’t have their timing down yet which is completely understandable and I know will improve with time. The only red flag is the fact that Cokes are served in the bottle which means no free refills. Each Coke is a new charge.  I will be back, however, to try some of the other menu items becuse their cook has a great touch with food.