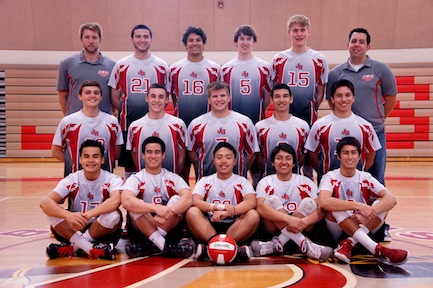 It was simply a do or die situation. Faced with the daunting task of having to win a match on the road to claim another league title, Burroughs stepped up and proved itself worthy as a champion. Behind 24 kills and four aces from senior Daniel Jacobs, the Indians won their four consecutive league championship with a 17-25, 27-25, 25-22, 25-17 victory over Claremont on Tuesday.

The teams will share the title virtue of splitting their season series this year.

“Being able to win the match at their place was an amazing accomplishment because it is one of the most hostile environments you can be in. Their crowd is always having an influence on the game, they do a great job, but our guys were aware of what they were walking into and did a great job of tuning it all out,” Burroughs coach Joel Brinton said. “The guys deserve a ton of credit for being able to band together and realize that they all they need are each other and they could survive that environment and be successful in it.”

“It feels amazing to be able to win the league title again. It’s an honor to share it with Claremont, as their team is great and our battles this year have been epic,” Brinton said. “But the most important I feel is that these guys were able to achieve what they set out working for in August when school first started. Their hard work paid off and I am glad that they were able to see that.”

CIF playoff seeding will be announced Saturday afternoon. The Indians are expected to host a first-round Division II match on Tuesday. Burroughs lost in the CIF Division III championship match in 2011 and in the semifinals a year ago.

“This will obviously help with playoffs because we will be going into some similar environments and these guys now have the experience of knowing what it takes to be successful in it,” Brinton said. “Now we move on to our second goal and focus on making a deep run in CIF and trying to get back to the championship game.”

In a “must-win” situation, the Indians prevailed with the league title on the line. That experience should prove valuable as they move on to the playoffs.