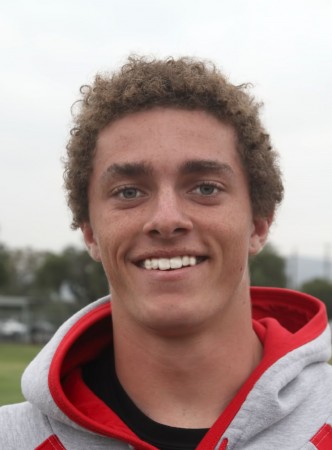 Less suspenseful than the race for the Pacific League Championship was down the stretch, in a season in which he broke numerous Burroughs High School and league records Zander Anding was the unanimous choice for the league’s Most Valuable Player award when the head coaches tallied their votes last month.

Anding finished the season with 2, 670 yards and 30 total TDs, playing in only nine-and-a-half games. He led the Indians to a third consecutive league championship before an opening round loss in the CIF Southern Section playoffs to Los Altos ended their season on November 18.

Ike Nwachie, Kody Jensen and Jose Pereya were first-team selections on defense while punter Daniel Marbach also made the first-team.

Across town, senior running back Herman Castro was Burbank High’s lone first-team selection. Burbank linebacker Daniel Martinez was a second-team selection, much to the dismay of his head coach.

“Daniel was the guy that got cheated a little, maybe because of our record or maybe because of his size, I don’t know,” Burbank High Coach Hector Valencia said. “But the kid broke the school record for solo tackles (57) and was first or second in the league in tackles, so it is disappointing that he got overlooked.”

Win or... Do Over? Girls Soccer to Battle Again
18 Year-Old Man Arrested After Being Indicted for Pointing a Laser at an Aircraft
This Week's Closures for the I-5 Freeway Projects
Book Review: Lost Burbank