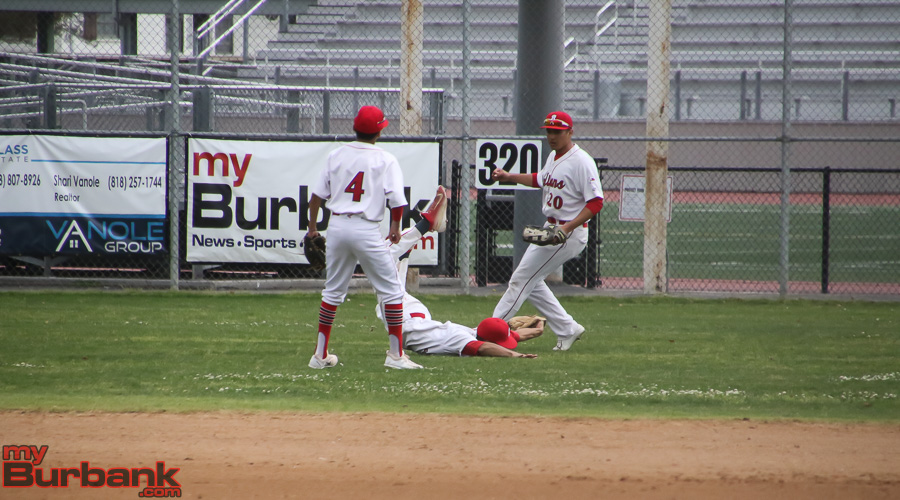 A pitching duel isn’t going to yield too many hits and runs, so it was imperative Burroughs High take advantage of any and all opportunities.

“We’re just not hitting the ball. We’re just not swinging the bat,” Burroughs coach Craig Sherwood said of the offense. “I thought the pitching was good. The pitching gave up one earned run. There were base running mistakes, also. They’re good kids and they’re trying. They’re putting the effort in and they’re working hard. Right now we’re in a funk.”

One opportunity slipped through their fingers and it came in the seventh inning when the Indians loaded the bases, but failed to score.

“We are the epitome of a .500 team,” Sherwood said. “We win a game and then we lose a game. I don’t know which switch they’re going throw that day. The on or the off switch.”

After senior Andrew Jacob Barrera lined out, senior Matthew Diaz then drew a walk from sophomore Cody Turner and when junior pinch hitter Nicco Chuidian was hit by a pitch, Diaz moved to second base.

“If we wanted it, we should have hit it,” Diaz said of Turner’s soft offerings. “I feel like we weren’t aggressive enough.”

Is there a fatigue factor given that Burroughs is in the middle of an eight-game stretch over eight days?

“We’ve been doing this since the summer,” said Diaz, who singled to center field in the second inning. “We’ve played a bunch of games since the summer. More competition, the better we’ll get.”

Junior Demetrius Freeman was called in and immediately walked junior Andres Salazar, which loaded the bases.

Freeman settled down and retired senior Brandon Giraldo on a called strikeout. Freeman induced pinch hitter junior Jesse Rodriguez to fly out and collected the save.

Neither team scored in the first and second frame, but the Hawks (3-4-1) pushed over two runs in the third inning.

With two out, junior Julian Jaramillo, who was making his first varsity start on the mound, walked junior Eduardo Morales.

Freeman then lined a sharp double down the left-field line as Morales scored to make it 1-0.

Knight pulled ahead 2-0 when senior Devan Graves was safe on an error and scooted to second base.

In the first inning and facing the first batter of the game, Salazar made a brilliant diving catch on Freeman’s looper.

Knight added a run in the top of the sixth inning that made it 3-0 against junior Brandon Aguilar.

Vega doubled to right center and crossed the plate when senior Marc Vega reached base on an error.

Aguilar went one inning and fanned one with an unearned run, junior Xavier Dubon tossed a perfect fifth inning and senior Jacob Real toured a hitless seventh inning, walking one and striking out one.

In three of the seven frames, the Indians (4-5) were retired in order by Turner.

In the first inning, after sophomore Brian Garcia bounced back to Turner, senior Revin Diego lashed a single up the middle and moved to second base on a wild pitch.

That would be it for Diego as senior Nathan Palafox then lined out and Barrera grounded out.

In the third inning, the Indians were able to muster a one-out walk by junior designated hitter Collin Johnson.

Johnson was erased when Garcia reached on a force out and Garcia was erased on Diego’s force out.

In the fifth inning, Salazar drew a one-out walk and raced to second base on Giraldo’s walk.

Johnson was safe on a force out and the inning ended when Johnson was caught stealing second base.