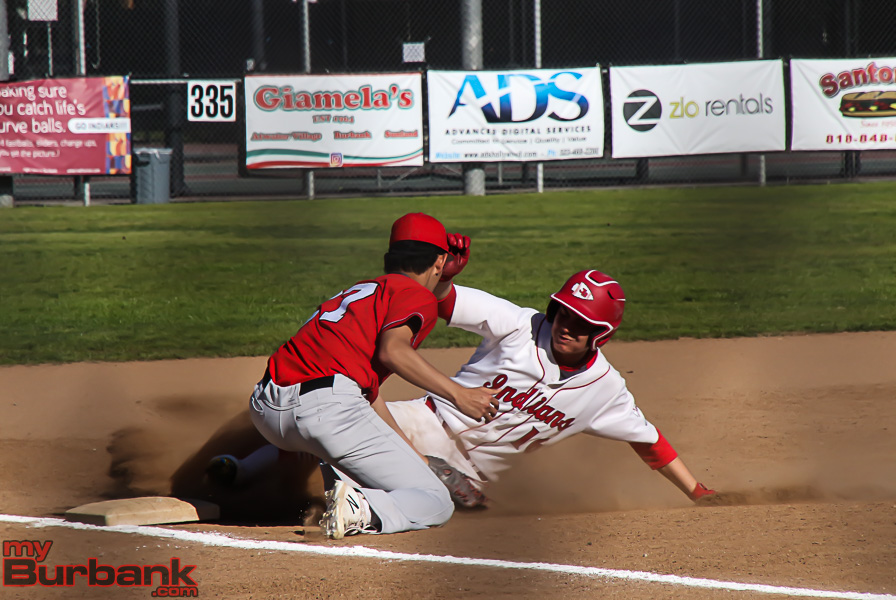 So far this campaign, the Burroughs High baseball team has been involved in two long streaks.

The first was a six-game losing skein to begin the season, but also own a four-game winning streak.

On Friday afternoon at Tomahawk Field, the Indians sideswiped Glendale 7-1 in a Pacific League game and have claimed six of their last seven games.

“We’re starting to swing the bats a lot better with two outs,” Burroughs coach Craig Sherwood said. “In the first six games, we probably left 20 guys on with two outs. Now we’re starting to get those guys in. We got into a funk and we found our way out of it. We’re on the right track now.”

Nicco Chuidian was credited with the victory after working six innings, yielding five hits with 10 strikeouts and two walks.

Chuidian’s only sub-par frame was the sixth inning when the senior right-hander gave up three hits and one run, but otherwise was stellar.

“Going into the sixth inning, I was getting tired,” said Chuidian, who doubled to left field in the sixth inning. “I thought that ball Collin [Johnson] hit was going to end the game. I said, OK, go out there. I don’t mind pitching. I had my mind set in the wrong place when I started that inning.”

Chuidian said despite the team losing its first six games, many were tight.

“Even when we went 0-6, all those games, they were all very close games. They were walk-offs,” he noted.

Burroughs grabbed a 2-0 lead in the first inning as it tagged junior right-hander Thomas Kovarik, who surrendered two hits across four innings, striking out six, walking five and hitting a batter.

In the frame, eight batters made their way to home plate with senior Michael Le and Chuidian each drawing walks.

Le went to second base on a wild pitch, third on a walk and scored when senior Preston Lemus was hit by a pitch that made it 1-0.

Chuidian took second base on a walk, third base on a hit batter and scored on the first of three errors by the Nitros (5-4 and 0-4 in league) as it became 2-0.

A two-run third inning saw the Indians, who are leaving for Phoenix, Arizona, to play five games in five days in the Coach Bob National Invitational Tournament,  slide ahead 4-0.

“It’s really important,” Sherwood said of the upcoming portion of the schedule. “We won that tournament three years ago and we’re looking to going there and doing well. We’ve got 12 pitchers on the staff and all 12 pitchers have done an outstanding job. I think we’re going in the right direction.”

This time Burroughs (6-7 and 4-0 in league) sent six batters to the plate as senior Julian Jaramillo delivered a run-scoring force out that brought in Johnson, a senior who was safe on an error, and junior Johnny Angel’s sacrifice fly scored Chuidian, who reached on a walk.

Burroughs extended its advantage to 5-0 with a run in the fourth as Johnson’s two-out bloop single to left brought home senior Andres Salazar, who walked to lead off the frame.

The Indians’ lead swelled to 7-0 with two runs in the fifth as eight batters waltzed to home plate against junior Michael Gonzalez.

Junior Hyatt Entz had a run-scoring infield single as Jaramillo, who singled to begin the inning and had senior Christian Morales enter as a pinch runner, scored and junior Brian Garcia’s single with two out drove in Entz.

Chuidian ran into some trouble in the sixth inning as he faced seven hitters including senior Darion Jenks, who had a two-out, run-scoring single that cut the lead to 7-1.

“It’s been our team’s struggle all year long, where our first time through the lineup we tend to be very tentative, especially with a pitcher who is consistently in the zone,” Glendale coach Marcus Whithorne said. “That’s been our challenge. It shouldn’t take three or four innings. That second and third time we should perform better.”

Chuidian worked a perfect first inning that included striking out the side as junior Ian Nord fanned looking, senior Michael Tichenor struck out catcher to first base and Jenks whiffed swinging.

Another 1-2-3 frame followed in the second inning as Chuidian allowed a single to Kovarik, who went to second base on a balk.

Junior Ethan Aldrete fanned swinging and senior Nathan Wong lined to left fielder Angel, who gunned the ball into the infield which doubled up Kovarik.

Chuidian’s third perfect frame followed as Tichenor grounded to second base, Jenks fanned looking and Kovarik struck out catcher to first base.

Chuidian faced four batters in the fifth inning as Aldrete bounced back to the box, Wong walk, advanced to second on a wild pitch, third base on Lousararian’s grounder and Harley then bounced to shortstop.

Salazar went one inning for Burroughs, fanning one and hitting a batter, while Gonzalez worked two frames, striking out three with three hits allowed for Glendale.