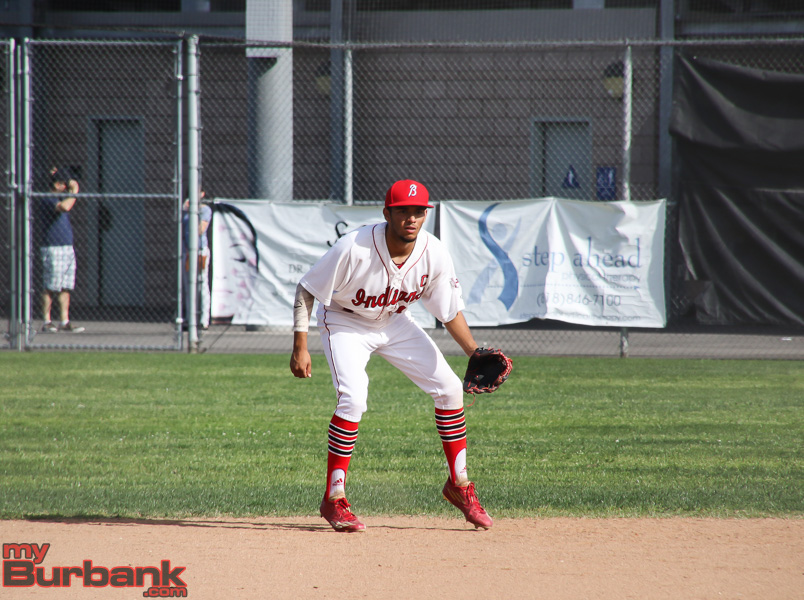 It took roughly 40 minutes to play and when it was over an unexpected offensive avalanche hit the Burroughs High baseball team.

After that first inning, Crescenta Valley managed one run, but the sum resulted in a 10-0, five-inning victory for the Falcons in a Pacific League match on Friday at Tomahawk Field.

Three days earlier, when these two met at Stengel Field, the Falcons, who are ranked No. 2 in the CIF Southern Section Division II and now own a 22-game winning skein, prevailed 4-0.

The victim was sophomore pitcher Niccolo Chuidian, who faced seven batters and collected one out before being lifted in favor of senior Matthew Rudas.

“I tried to find my rhythm, but I couldn’t,” Chuidian said of his poor outing in which he walked three, hit a batter with one hit allowed. “It happens to everyone. But I’ve got to learn from it. It’s a tough loss.”

“This was a case of a great pitcher who wasn’t on,” Burroughs coach Craig Sherwood said. “I’m not worried about that [letdown]. It was an aberration.”

Sherwood continued: “It happens to good teams and we’re a good team,” he said.

Chuidian walked leadoff hitter senior Kewin Ledesma and then hit freshman Will Grimm with an offering.

Senior Scott Vinceri popped up to Chuidian, who then walked junior Trevor Beer, the opposing pitcher.

Senior Nico Arredondo grounded a potential double-play ball to senior shortstop Justin Palafox, who bobbled it for an error.

“Once he hit it and the runner was moving, he blocked my view,” Palafox said of the rare miscue. “We’re going to pick up our heads. Monday we have practice. We have a chance to play Burbank twice this week.”

Up stepped senior Max Meyer, who lined a booming double to right center that brought in three runners.

When Chuidian walked senior Jaimy Blank, his work was over. Rudas then allowed an infield hit to senior Charles Weinmann that scored a run.

After senior William Rees singled to left, a bases-loaded walk to Ledesma forced in another run and Beer’s single up the middle plated two runners that capped the nine-run, four-hit frame.

“You can’t see that coming,” Crescenta Valley coach Phil Torres said of the final lopsided score. “They were a double play away from getting out of that.”

The Falcons (24-1 and 12-0 in league), who are a game ahead of second-place Arcadia, added a run in the fourth inning when Beer doubled to center field and scored on Blank’s one-out grounder.

Beer allowed just one hit, a leadoff single to right center in the fourth inning from senior Riley Hooper.

“I’m not complaining,” said Beer, who struck out nine and walked three with one hit batter of the first-inning explosion. “I went to the bullpen and kept loose.”