There are things that a baseball team can do to make it really difficult on itself like committing errors and issuing walks.

On Friday afternoon at Tomahawk Field, the Burroughs High squad did both as it kicked around the ball to the tune of five miscues and its pitching staff issued seven walks and to make matters even worse, hit three straight batters and in the process fell to Arcadia 12-0 in a Pacific League game that was cut to five innings because of the 10-run mercy rule. 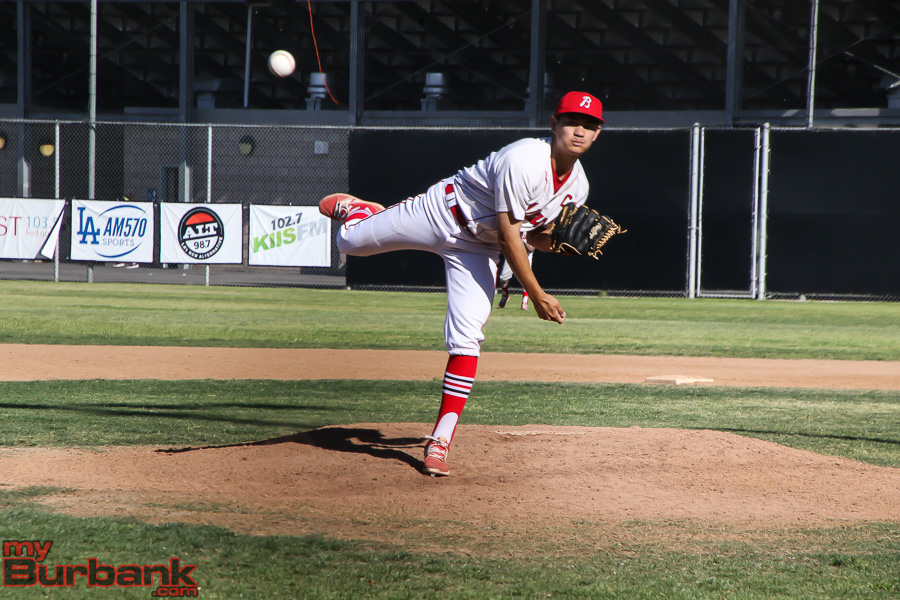 Senior Nicco Chuidian didn’t have his best stuff in an outing against Arcadia. (Photo by Ross A. Benson)

“I’m not going to sugarcoat it. We had a bad day today, like every other team in baseball is going to have now and then,” Burroughs coach Craig Sherwood said. “I’ve seen major league teams lose by 12 runs before. It happens at every level of baseball. You don’t want it to happen. You wish it wouldn’t happen, but it’s part of what sports is.”

“They try and that’s all I can ask of them,” he noted. “Some days it’s not there. That’s a good team [Arcadia], but I think they’re beatable if we just play our good game. Teams go through good streaks and bad streaks. Right now we’re in just a little funk.”

The Indians (9-15 and 6-4 in league), who lost to the Apaches 11-1 on the road three days before, were able to garner only two hits off junior pitcher Chris Wilson and it occurred in the fifth inning when senior Nicco Chuidian led off with an infield single and senior Julian Jaramillo then lashed a sharp base hit to left field.

Wilson righted the ship and induced senior Andres Salazar to bounce into a double play and then retired senior Preston Lemus on a strikeout with the catcher applying the tag.

Otherwise, the right-handed throwing Wilson was perfect over the previous 12 batters, striking out seven over five frames. 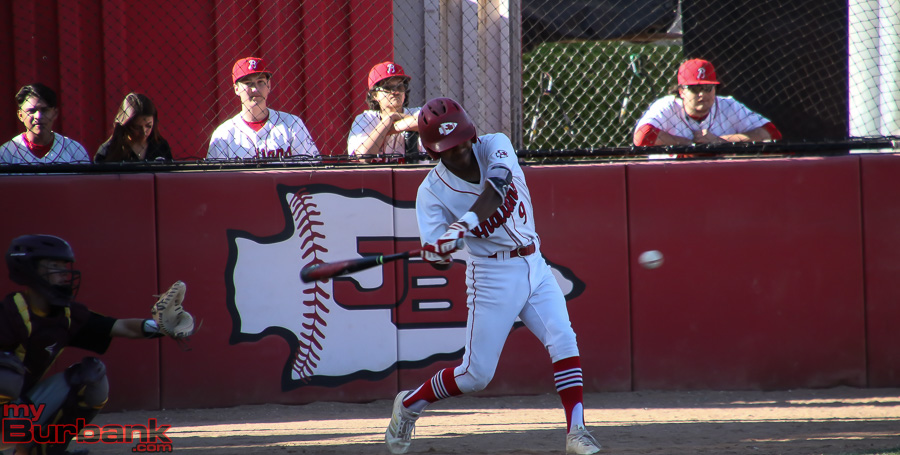 Senior leadoff hitter Brian Garcia went hitless in two at-bats in a game shortened to five innngs versus the Apaches. (Photo by Ross A. Benson)

The Apaches (19-1 and 9-1 in league) are ranked No. 43 in the nation and No. 12 in the state according to the sports website www.maxpreps.com and played like it.

In the first inning, Arcadia bolted ahead 1-0 as Chuidian surrendered a bloop single to right center by the leadoff hitter, senior Jeffrey Castillo.

An error on a pickoff throw sent Castillo to second base, junior Dustin Allen’s sacrifice bunt moved Castillo to third base and scored on a single down the left-field line by senior Dominick Tello.

“I felt we were still in the game,” said Chuidian, who allowed four hits with six walks and three strikeouts across three and two-third innings about the early portion of the game. “I was struggling on the mound, but my defense was trying to find ways to get me outs. But once again it comes down to hitting. We’re just not producing at the plate. I feel like we’re taking too many fastballs. Getting behind early in the count and not working the pitcher as much.” 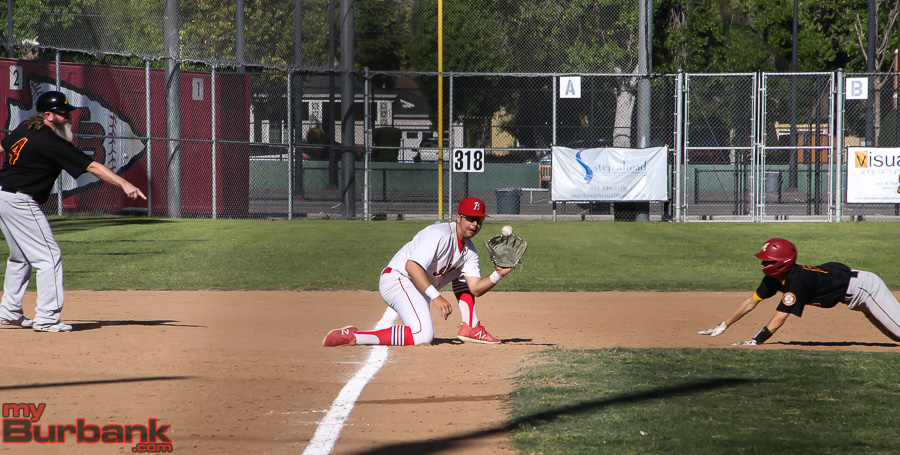 Defense was an issue for the Indians in a 12-0 loss to visiting Arcadia. (Photo by Ross A. Benson)

The Apaches stretched their lead to 2-0 in the second inning when Chuidian walked senior Tyler Quintero, the first batter.

Three consecutive walks followed as junior Gavin Vogel, Castillo and Allen all drew a base on balls from Chuidian which plated Quintero.

“When they’re giving us free bases. We’re a pretty good team and it’s going to be tough to beat us,” Arcadia coach Nick Lemus said of the walks and errors by the Indians. “We’re good, no doubt about it. Baseball is just a funny game. Any pitcher can shut you down on any given day. You can hit balls hard and get outs. You can hit balls softly and find holes.”

Two runs crossed the plate in the fourth inning as Castillo walked, stole second and scored on Allen’s long triple to left center. Allen came around to make it 4-0 on an error.

Arcadia sent 12 batters to home plate and scored eight runs in the fifth frame that included run-scoring singles by Quintero and Allen, Tello’s run-tallying double to left center, a run-producing walk by Castillo and junior Dylan Guerra getting hit with the bases loaded for a run batted in.