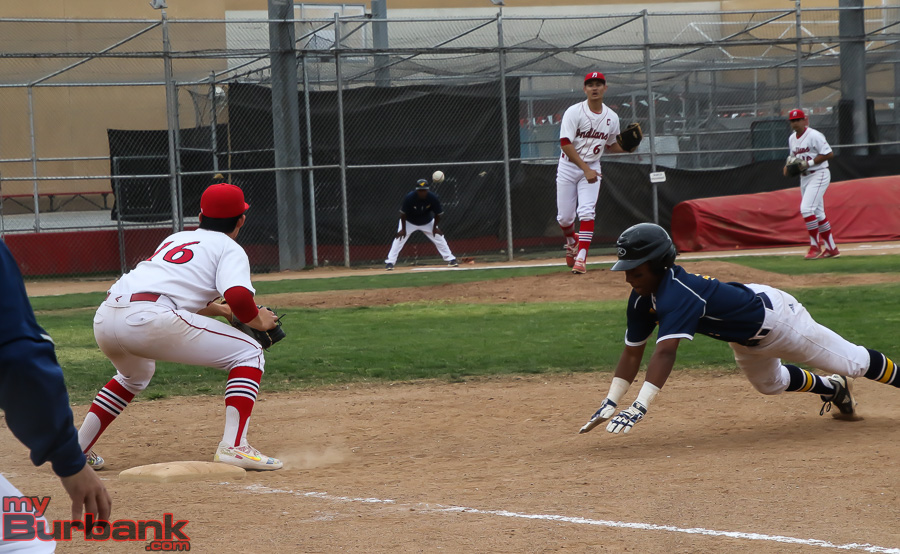 Brian Garcia goes about his business in a quiet and dignified manner, but is also highly confident and professional, which translates well onto the baseball diamond.

On Friday afternoon, Garcia’s clutch two-run double to left field in the sixth inning helped propel the Burroughs High baseball team past much-improved Muir for a 5-2 triumph in a Pacific League game at Tomahawk Field.

Garcia’s at-bat came with no outs and scored junior Hyatt Entz, who singled to right center to open the stanza and then raced to second base on a wild pitch.

Junior Jorge Gutierrez also crossed home plate after getting hit by a pitch.

“I knew we weren’t going to win by one run,” said Garcia, a junior shortstop who contributed two hits. “One run wasn’t going to be enough to beat a team like that. These guys [Muir] fight.”

Garcia said that he was looking for a certain pitch from junior Amaris Harrison, who took over for senior Emilio Martinez.

“It was a fastball low and inside. I was looking fastball,” he said of the offering. “I put my foot down early. No off-speed was going to make me chase. If it wasn’t a fastball, I was going to take it.”

Also making it a long day for the Mustangs (12-5 and 4-4 in league) was the effectiveness of senior pitcher Nicco Chuidian, who tossed a two-hitter with eight strikeouts and three walks over six innings.

Chuidian did run into some trouble early as he allowed a run in the first and second inning, but didn’t surrender any runs after that.

“The pressure that I had to keep those first two guys off the base,” Chuidian said was the cause of the problem. “That early struggle. There’s always a sense of urgency when we play these kind of games. We knew it was going to be a tough battle.”

Chuidian said that he grew more confident as the game progressed.

“I started relaxing more,” he noted. “As the game went on, I felt they were slowing down and I couldn’t let up.”

“It’s hard to throw strikes to a guy that steals bases,” he said. “I think he was worried about walking him and he walked him.”

Senior Julian Jaramillo was also effective working one inning and didn’t allow a hit with one strikeout.

The Indians (9-13 and 6-2 in league) had a one-run lead before Garcia’s key two-base hit and the way the Mustangs have been playing, knocking off previously unbeaten Arcadia 5-4 on the road and then taking care of Burroughs 1-0 in eight innings on Tuesday, they could have rallied.

“We had the same exact situation on Tuesday. Two guys on. Nobody out with Brian at the plate and all my instincts said to lay a bunt down and I didn’t do it and he hit into a double play,” Sherwood said. “And for two days, I literally didn’t sleep. I’ll never make that mistake again. I’ve gotta trust my brain and not my heart. ”

Sherwood continued: “And then he came up in that same situation and I said to myself, I knew he was going to hit,” he said. “And so I didn’t put the bunt on and he hits the double and breaks the game open.”

Each team scored in the first inning when Muir led 1-0 after Harrison walked to open the frame.

Harrison swiped second base, moved to third base on senior Aryonis Harrison’s fielder’s choice and scored when junior Ely Resendiz bounced into a double play.

The Indians responded by taking a 2-1 lead in the bottom of the first when six hitters trotted to the plate.

Garcia walked to commence the frame and dashed to second base after senior Michael Le laid down a sacrifice bunt.

Senior Collin Johnson’s line-drive hit to right center brought Garcia home and when Chuidian rifled a ball down the line for a single, Johnson crossed the plate to make it 2-1.

Muir evened the contest at 2-2 in the top of the second when junior Angel Lopez ripped a single to left center as Solis scored after walking with two out, stealing second base and scooting to third base on a wild pitch.

Luckily, the Indians are blessed with a deep pitching staff with a dozen hurlers standing ready.

Chuidian is very likely the ace and showed it throughout much of the game, including the third inning when he faced the minimum three batters.

Harrison drew a leadoff walk, however, Aryonis Harrison was called out after running outside the white line down first base.

Resendiz then bounced into an inning-ending double play as the threat was vanquished.

Another perfect inning followed as Chuidian saw Solis fly out to right field, Lopez striking out, catcher to first base and senior Tyquise Solomon grounding out to second base.

The Mustangs began the sixth inning with a base hit to left field from Amaris Harrison, who was later picked off by Chuidian.

Aryonis Harrison struck out, but reached first base on a throwing error, only to see Resendiz strike out swinging and Taylor fanning with the catcher applying the tag.

Also getting base hits for Burroughs was senior Andres Salazar, along with junior Johnny Angel and Gutierrez.

Martinez yielded seven hits with two strikeouts and three walks across five innings for the Mustangs and Harrison toured one inning, allowing one hit with two walks and one strikeout and a hit batter.