A team from Gyeonggi, South Korea flew into Southern California during their vacation period to play several local high school baseball teams. One of their first stops was here in Burbank as they played a 10-inning game with the Burroughs varsity baseball team.

High school baseball does not start officially until March 1 so teams can schedule their own ‘scrimmages’ before that time. The game with the Korean team was scheduled for 10 innings with both teams playing inspired baseball and were tied at 3 after seven innings.  A 2-run homer by Korea in the 8th inning proved to be the winner as they won the scrimmage 5-3.

Before the game both teams exchanged gifts with the team from South Korea giving gift towels representing their high school. Burroughs players presented each player with a City of Burbank bag consisting of a Burroughs pin, Burroughs lanyard, “I Love Burbank” button and Disney donated a pez dispenser, an Avenger action figure and a travel pillow.

Burroughs Vice-Principals Oscar Macias and Matt Chambers were also on hand to welcome the team during pregame ceremonies where the gifts were exchanged and pictures taken.

While neither team spoke the same language, the universal language of baseball was enjoyed by everyone. 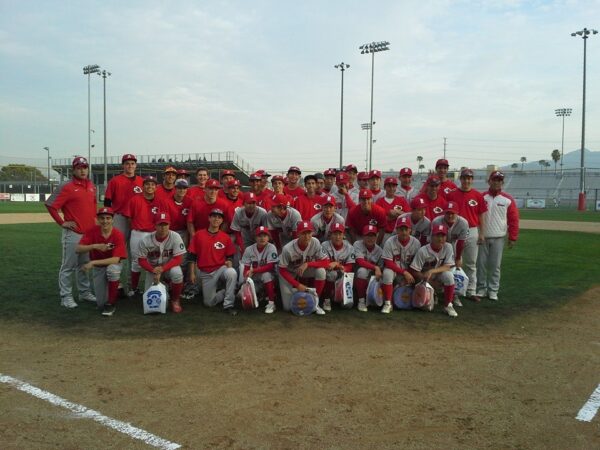